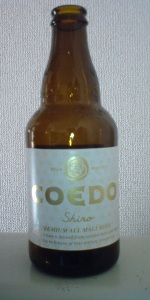 Notes: Wheat beer is instantly recognizable by its bright hue, tinged with a soft, milky white glow. Yeasts selected specifically for their ability to bring out sweet aromas from the wheat are complemented by fruity notes for a rich yet refreshing brew that is smooth on the tongue and goes down with a flourish. We chose the Japanese word for white for our Hefeweizen as a way to capture not only its bright color, but also its distinctively gentle character that is at once comforting and unique.
View: Beers
Reviews: 24 | Ratings: 66 | Log in to view all ratings and sort
Reviews by Hoppsbabo:

My second ever Japanese crafted beer. (Sapporo, Kirin and Asahi do not count!)

A: Nice cloudy straw colour. After two or three minutes the head vanishes.

S: Rubbery at first, but actually turns out to be very nice. Banana and spice.

T: Not half bad. Sweet, lots of banana but just on the right side of palatable/sickly. A bit more effervescence would take it a lot further, but the flavour is spot on. Not much bubblegum.

M: Body strength spot on but it's the flattest hefewiezen I've ever had, as in it's almost entirely flat, and I can't work out if I like that or not. Maybe not.

O: Very underrated, but again, I really feel it would benefit from some more effervescence. All in all good job, Coedo, but stop copying Chimay's label design!!!

Pretty unacceptable head action for a hefeweizen; it hardly even appears. The body is an evenly, lightly hazed gold.

Smells very true to style, with a massive banana aroma (and some pineapple) with a bit of clove as well, although that comes through more in the flavor than the smell. What else to say? It's textbook. Fairly light, dry, low hop aroma and bitterness, and overall quite pleasant. But definitely not better than the German originals.

Drank from my Duvel Tulip

T - Up front some nice malty flavours but fades badly after that.

M - Medium body, sticky mouthfeel and a little watery. The carbonation is low.

O - Not the best Hefe and there are much better examples

A: The beer is relatively clear dark yellow in color and has no visible carbonation. It poured with a ¼-finger high head that quickly dissipated, leaving only a thing collar around the edge of the glass and some wispy lacing on the surface.
S: There are moderate to strong aromas of bananas in the nose along with notes of bubble gum.
T: The taste is almost identical to the smell and has lots of flavors of bananas and bubble gum.
M: It feels light- to medium-bodied on the palate and has a low to moderate amount of carbonation.
O: This beer has a great smell and taste but is lacking in carbonation, particularly in the appearance.

A: Pours a lightly hazy medium golden yellow in color with some orange highlights and moderate amounts of visible carbonation. The beer has a quarter finger tall bubbly white head that quickly reduces to a couple of small patches of large bubbles and a thin ring at the edges of the glass. Light amounts of lacing are observed.

O: The smell and the taste of this beer are spot on for the style but the appearance and mouthfeel are not quite spot on... Very enjoyable and easy to drink, easily sessionable.

T/M-Light/medium bodied with light, unobtrusive carbonation and a lingering bubblegum sweetness in the finish. A by the book hefeweizen. Could use some more aggressive prickly carbonation to bring out the pepper/clove flavors and cut the sweetness.

O-An average interpretation of the style.

Poured from the bottle into a collins glass. Served a little colder than expected at the sushi joint I was at.

A cloudy off yellow/orange body. Head does not stay at all but is off white colored. It manages to maintain a collar throughout drinking but there is no head action on this beer whatsoever.

Bouquet is wheat and simple yeast, with chewy spice profile. Faint hint of ginger, but it seems like a wet beer is coming, not very dynamic. No sense of clove or banana.

Taste is a wet bodied and watery lemon, muted wheat and airy spritzy feeling. It certainly tastes like a Heffeweizen, but it's quite watery in mouthfeel.

Still overall this is pretty easy drinking, and depending on the price I could drink this compared to some other mass produced beers. There is certainly better for this style out there but I could have this again no problem.

Pours a hazy golden-straw color with a one-finger off-white head and some sediment at the bottom.

Aroma is fairly typical for the style: wheat, yeast, banana, and citrus.

Flavor is wheaty and yeasty with banana, clove, and lemon. Something is a little weird on the finish - maybe this beer is less than fresh.

Fairly light body with a mild astringency on the palate.

Drinkability is above average. Overall this is a pretty average hefeweizen.

Purchased from a Japanese supermarket in a unique bottle with creative letters raised on glass of the neck.

A - An average hay color. Some reasonable head, close to 1 finger. And even some continued carbonation. A slightly cloudy haze to the beer.

S - Also average for a Hefeweizen. Some sweet sour citrus yeast smells mixed with a splash of wheatyness.

T - Initial sour twang that you expect some faint fruity estery tones and a standard hop. A Hoegaarden clone.

M - A bit too loose, as is common in Japanese micro brews. Maybe a result of sugars or rice in the process.

D - This is a fine off the shelf Hefeweizen and pretty good for a larger Japanese micro brew. This is an attempt to compete with the recent popularity of Hoegaarden.

Pours a murky light whitish-brown with a foamy tan head that settles to wisps of film on top of the beer. Small dots of lace slowly drip into the remaining beer on the drink down. Smell is subdued with some wheat, banana, and spice aromas. Taste is much the same with grain, caramel, banana, and spice flavors on the finish. There is a mild amount of spice bitterness on the palate with each sip. This beer has a lower level of carbonation with a slightly crisp and medium bodied mouthfeel. Overall, this is a pretty good beer with decent aromas, but the taste is slightly better in terms of traditional hefeweizen qualities.

My local package stores has 5 or 6 imported German Hefeweizens. I've tried them all, I would say this Japanese product is as good as any of them, and better than some.