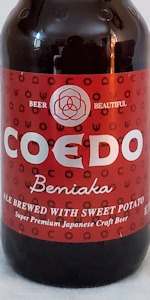 Notes: Brewed with roasted Kintoki Sweet Potatoes from Saitama Japan. This imperial Amber is rich and smooth bodied in style, perfectly balanced with earthy hop bitterness. With the aroma of caramel, sweet potato and hops, Beniaka delivers on all senses.

Because of the use of sweet potato as a secondary ingredient, Japanese laws classify Coedo Beniaka as a Happoshu (malt beverage).

Intro: 12 oz. poured into a tulip glass. Shared with a friend

Smell: Sweet. Not much else

Taste: Followed along with the smell. Not cloyingly sweet. Was expecting a heavy sweet potato taste but not so much. Was surprisingly balanced.

Drink: A little goes a long way. Wouldn’t want to much of this one.

Conclusion: Happy to have tried the style but would not revisit. Oddly enough, this was my last needed style to try until BA added Lager – Festbier just the day before so this is style #113 for me.

First Happoshu, whatever that means.

This one pours a slightly murky brown color, with a small white head, and lots of lacing.

I don’t know what a happoshu is supposed to taste like. But this kinda feels pumpkin-ale-ish, with a fleshy sweet potato sweetness, some floral type character, and a bit of breadiness.

This is creamy, and pretty drinkable, with a slightly slick finish.

Lovely clear brown body topped with a thick and frothy head; sticky sheets of foam adhere to the glass. Nice earthy and mildly sweet smell; a bit of caramel and brown sugar. A muted sweetness and caramel taste dominates the flavors; a smidgen of cola in the background; fine and subtle bitterness permeates it all. Medium body; softy prickly; semi-sweet overall.

This beer reminds me of a brown ale. It is nicely balanced and intriguingly complex. I do not know what sweet potatoes add to the beer overall, but there is no overt presence of them to be found. Good and righteous...

Sample from the brewer himself in Kawagoe near the brewery.
Clear brown - copper body with high clarity and a very good off-white head.
Medium body and carbonation.
Very good balance with a harmonious mix of flavors. Mild bitterness. Refreshing, excellent version of the style.

L- Very deep chestnut brown. 3mm fine off-shite head clearing to lacing.
S- It has a distinctive and somewhat earthy aroma.
T- The flavour is also quite disctinctive, but then again it's the first beer I've had made with sweet potatoes! That said the difference is quite subtle, if I didn't know re: the sweet potatoes I wouldn't have guessed the recipe was that far off-piste.
F- It has as much body and mouthfeel as you'd expect from a 7.0%, it is over in the 'winter-warmer' category in my opinion. Very drinkable, nothing notable is out of place. I'd drink it again, though if I'd pay for it at the price I paid is another matter.
O- Above and beyond the Japanese mass-market beers, they really do produce some very interesting beers. They tend to be damned expensive, both over there, and I previously lived in Tokyo, so of course over here too. But what I notice, and appreciate is that the JPnese are perfectionists, and there is rarely if ever anything to find fault with in higher end beers like Coedo (Hitachino Nest, etc).
Bought from Amathus [drinks shop] Wardour Street, Soho, London W1. £3.90/333ml

From the bottle into a Reidel Overture Beer Glass paired with a black truffle gouda grilled cheese and creamy butternut squash soup topped with toasted pumpkin seeds.
L: A gorgeous Amber red color with a full fluffy head
S: Earthy, sweet with a balance of caramel and bitterness
T: Earthy, Hoppy tang with a lingering sweetness, great match for the truffle gouda
F: Rich bodied and well balanced but definitely a slow sipper at 7.0%ABV
O: Not something I would select regularly but definitely a treat with the right meal. Pretty cool that it's brewed with roasted Kintoki Sweet potatoes from Japan! Would pair well with mushrooms, Charcuterie, Salmon, Asparagus, Steak, Cheese, Chocolate Cake

Pours a dirty brown color - cloudy and somewhat hazy. Thin tan head dissipates util there is about a quarter inch of velvety foam that lingers for some time. Solid head retention.

Aroma is interesting - there is some spice, bready malts, sweat potato, and some soapy vegetal hops. This is frankly unlike any beer I've ever smelled. Almost reminds me of an overly old spiced pumpkin ale ...

Taste has notes of bready malts initially - it tastes like a lager up front. You then get this spicy peppery note along with a sweet potato note and a bitter earthy finish.

Feel is light to medium bodied. The bitterness coats the mouth and leaves a lingering sensation in the back of the mouth. Mild to moderate carbonation.

Overall this is a truly unique beer - my first and only experience with Happoshu. This particular example is a solid beer - but would seem to me to be more of an acquired taste.

Poured into a Seattle Beer Week pint glass. Pours a medium reddish browna with a fizzy light khaki head that dissipates quickly to a thin film that is then persistant. Aroma of biscuit malt and unidentifiable vegetable that does smell somewhat like sweet potato if you are expecting it; mostly malty and vegetal. Flavor is semi-sweet biscuit malt, slight brown sugar and light sweet potato, mildly earthy with a malty and lightly grassy op finish. Medium bodied with light creaminess and good mouth feel. I got this because I've enjoyed sweet potato ales in the past and always looking for craft offerings from Japan. I was a little discouraged to see somewhat low ratings for this, especially after the odd vegetable notes in the aroma. However, I was pleasantly surprised by the flavor, which has genuine sweet potato character, but well balanced by the malt, which has a nice dark malt profile similar to a bock. This is not a typical happoshu and at the top of the ABV range for the style; I'd probably characterize it as a vegetable beer. I guess I'm fan of sweet potato beers and I rather liked this.

a brown ale brewed with sweet potato, a very cool beer that i have not seen for sale in colorado before now. the bottles are neat, custom glass with the letters of the brewery stamped in to the neck. we rarely see japanese craft brands here, so this was an exciting one to find. a light brown dark amber mahogany beer with a swiftly rising white airy head with excellent retention, crystal clear and pretty in the glass. aroma is a little sweet, sort of starchy and earthy and candied, baked, warming and autumnal but also very simple, lacking the cocoa profile of a lot of brown ales despite the color, and thats true in the flavor too. there is a nice nuttiness to this, a pleasant even sweetness throughout, maple syrup and brown sugar, but it stays drinkable. i want to taste more of the sweet potato, i think a lot of it is fermented out, and it makes the malt base seem kind of thin and overly simple for the style. a little more roast and chocolate character here would be awesome, but i like it being a little lighter and easy drinking too. i am surprised the potato isnt more obvious in the flavor. i am also used to japanese beers having interesting yeast characteristics, but this one seems sort of simple and generic, a basic ale type without a ton of flavor. still, overall this beer seems high quality, fancy even, and quite unique, a mix of red and brown ale qualities in a really smooth and refined beer overall. fun stuff, i hope to see more of their stuff around! this is great at the holiday table, really festive without being spiced!

My first Happoshu ! (I never thought I would get beyond 101 styles.) What a pleasant surprise.
And so is the beer. Perfect for lunch (which mostly was California rolls.) So, I'm having a great culinary experience.
Beniaka has a pleasant sweetness (I presume from the sweet potatoes and caramel malt) that counters the soy sauce.

Looks and Smells resemble a Belgian dubbel with the usual malty, molasses, sugar going on. Taste lacks Belgian's individualistic spicing (which is OK by me) and Feels and finishes mostly sweet with out any cloying. But it is just the overall sensation of finding a new style and an appropriate food strictly by serendipity that makes beer-hunting all that much more fun.

I certainly hope to have Beniaka again... and again with mild food.

First off I don't like sweet potatoes at all but a beer brewed with them sounded interesting...even good. I'm glad i gave it a chance because it's a really good beer.

Surprisingly tasty! Poured from a 333 ml bottle, it appears dark amber-brown with some froth which does not retain well. Aromas are very much like a Belgian ale, malt, molasses, caramel. Taste is rich, sweet and thick, again very much like a Belgian dubbel, with a medium body and rather creamy mouthfeel. While classified as a happoshu (Japanese low malt beer), the sweet potato imparts its smooth, rich character, making this a unique brew.

A: pours a hazy dark Amber to light brown, with 1 finger off-white head that quickly recedes to a thick ring of bubbles at the edge of the glass. Only a little visible carbonation. Really interesting bottle.

T: drier than the nose would suggest, but still a sweet, malty, bready arrival. Mid palate is dark, toasted rye bread crust with hints of that sweet potato taste. As it transitions to the ending and finish you get a burst of earthy and sweet tubers right before a slightly astringent bittering. Earthy and slightly sweet taste lingers.

M: lighter end of mid bodied with low carbonation. A little slick initially, but turns clean and somewhat astringent on the finish. Definitely a lager. Without a doubt the cleanest and most drinkable pumpkin or yam beer I have ever had.

O: this satisfies the happoshu category, though it is no happoshu. What it is is a thoroughly enjoyable yam beer. If it weren't $6.39 a bottle, I'd make it a regular Thanksgivin tradition. As it is, it was an interesting beer and I would recommend it highly.