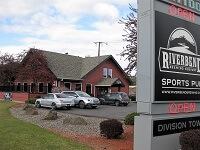 Definite sports bar feel. Not necessarily a bad thing, but with so many well-done breweries in the immediate area, the Riverbend ambience was a little disappointing. Service was excellent. Waitress was engaging and knowledgeable. Good food menu. Enjoyed the Riverbend Sando. Nothing to rave about, but it was a good sandwich. Beers are excellent. Wide selection with plenty of variety. Overall good experience and will return.

This is a sports bar. A 2013 remodel of the former "Rivals Sports Bar" on north Division Street in Bend. Unlike most sports bars it focuses on their own line of beers, produced at their brew facility just across the parking lot. It has a full dinner type menu - and a moderately simple happy hour menu of great pub/restaurant food.

It doesn't attempt to go head to head with the well-established breweries in Bend (i.e. Deschutes) or the newer and very popular beer-geek type establishments (i.e. Crux or Boneyard, etc.). Their comfortable, sports-adorned main room caused me to reflect on what the bar / tavern / restaurant scene might be like had macro-brew never developed as the dominant beer scene in the U.S. The patronage was comprised of 'just normal folks' - the crowd you might see at a bar / tavern in the 1980 pre-craft days. But instead of quaffing Bud or other BMC brews, everyone had a nice (and varied in color) up to 20 oz. glass of decent on-site produced beer in front of them, ranging from blonde ale to nut brown to saison to imperial IPA.

I had the 'happy-hour' two- pulled pork soft taco entree. It was outstanding. Freshly prepared to say the least. The 20 oz. red ale was decent and enjoyable. My companion had a nice crisp happy-hour southwest chopped salad and a 20 oz. nut brown. Total, about 18 bucks. The service was attentive and very warm/casual/friendly. The 6 large screens in the main rooom were carrying: a Tigers-Indian BB game (2 screens on opposing walls); highlights of the British Open Golf Tournament (again 2 screens); and The Tour de France (2 screens).

Also there is a nice outdoor seating area featuring a large fire pit.

The beer is good, though it won't knock you out with its complexity. Taps includes 9 of their own varieties. Plus a Widmer (or two) and a single tap for each Bud and Bud light. Also a tap for Steigl Grapefruit Radler - fitting for a week of 90+ degree July days.

I'd go back for sure.

Riverbend Brewing Company in Bend, OR
Brewery rating: 3.88 out of 5 with 157 ratings