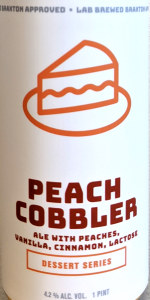 Look: This beer pours an opaque, murky,
golden amber color. Some visible carbonation. Bone white fluffy head that drops to a thin layer across the top of the beer, with a thin ring around the edge of the glass.

Smell: The nose is nice and matches the name. Juicy peach acidity. Though more the syrup in the bottom of the Dole fruit punch can. Some powdered sugar sweetness with a hint of cinnamon. Does a good job of evoking the fruit and crust aspect of the pie.

Taste: This is pretty good. On the tip of the tongue I get some tart acidity. A very mild sour lemon candy note. Some light peach juice, tangerine and some crusty notes driven by the vanilla and cinnamon. Some moderate sour peach ring gummy flavor that’s not too sweet. As I drink the beer more this is probably the defining flavor.

Mouthfeel: Pretty low carbonation. One dimensional on the feel. Semi sweet throughout. One of my favorite aspects of the Berliner is when it dries out on the finish with that crackery/bready wheat flavor profile. Not getting that here.

Overall: This beer is pretty good. It evokes its namesake for sure, although it is rather subdued. The finish and fee are a bit of a miss for me. It’s rather uneventful, and not the greatest pie inspired pale beer I’ve had, but it’s a nice easy drinker on this sunny, 75 degree. It wouldn’t buy it again, but a fun beer that I do not regret buying.