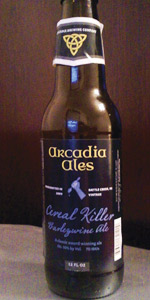 Notes: Brewed in the tradition of English-style barley wines, Cereal Killer offers an explosion of full-bodied, liquid goodness. Robust malty flavors converge with caramel, toffee, molasses and dark fruit notes to produce a remarkably complex and palate-pleasing beer. Its intense malt character is complemented by a subtle citrus finish from the crystal hops. With cellar-aging, Cereal Killer's flavor evolves further, developing a sherry-like aroma and flavor similar to a cask-aged port. Winner of the Silver Medal for Barley Wine Style Ale at the 2007 GABF.
View: Beers
Reviews: 286 | Ratings: 615 | Log in to view all ratings and sort
Reviews by bluejacket74:

12 ounce bottle, 2010 vintage. Served in a snifter, the beer pours a murky mahogany brown color with about an inch tan head that sticked around a little while. There's also a good amount of lacing. Aroma is nice, it smells like brown sugar, caramel, toffee, dark fruit (raisins, plums) and bready malt. The taste is similar to the aroma, but there's also the addition of some sherry and a bit of sweet spice. Mouthfeel/body is medium/full, it's coating and a bit creamy with moderate carbonation. I think it's a good overall brew, I'd buy this again in the future and probably age it longer next time.

2006 vintage. Fluorescent blood orange that is slightly more blood than orange. What a great color when backlit. Even though crown cracking led to a massive escape of pent-up CO2, foam didn't exit the bottle, the head wasn't massive and very little carbonation can be seen. Odd. The cap melts in attractive fashion and festoons the glass with a decent amount of patchy lace.

If you like big boozy barleywines, then you'll like how Cereal Killer smells. The dominant aroma is ripe fruit (apricots especially) macerated in fruit brandy and melted caramel. Hops play second fiddle, which isn't a problem given the style.

My hopes were less than high after the disappointment that was my last Brew Crew Big Beer from Arcadia (Big Dick's Olde Ale). This one, however, hits the style target pretty close to the bull's eye. It's a little tame, but then aged English barleywines usually are. Time appears to have taken most of the teeth out of the alcohol.

A shortage of malt is the only real negative. The result is a beer that tastes good, but a beer that lacks depth and power. Ease of drinkability is a corresponding positive. CKBW would be a good place to jump into the style, domestically speaking. Just be sure to age your bomber for upwards of two years first.

The flavor profile is reminiscent of Christmas fruitcake coated with toffee sauce and light molasses. Fruits include apricots, oranges, cherries and plums. No malt darker than Munich ensures that the darker fruits (raisins for instance) are nowhere to be found.

The mouthfeel is the only chink in the armor. It's too light for the style and is the reason why the flavor score isn't higher. The relative shortage of bubbles is a good thing... unless you enjoy post-gulp burps.

Cereal Killer Barley Wine (a great name) is surprisingly delicious. Going with the theory that it might have had more power and presence when young, I will try to find a fresh bottle. I have to say, though, it's damn good aged.

Much thanks to akorsak for sharing a growler of this beer.

Taste: This big malty beer is a meal it itself. It is heavy full rich and complex. Multi grain bread comes to mind. The hops are restrained but warming alcohol serves as a balance for this beer.

Drinkability: this beer is a monster. Take your time and take it easy.

Thanks to Vancer for this brew.

Poured into a chalice a nice dark amber color, nice carbonation, nice small creamy tannish head, tons of sticky lacing and islands throughout the drink. The nose is malty, some prunes/figs/raisins, and a good dose of caramel. The tasty is malty, with a good dose of dark fruit and caramel. The alcohol is hidden pretty well. Medium body, a well rounded, complex brew. Very drinkable, a nice english barleywine, highly recommended.

Somehow lost my initial review before I hit the review button. This is attempt to piece it back together. Poured into goblet from big bottle. Color is beautiful dark ruby/brown and has small foam clouds. Smell is sweet and flowery, almost fruity. Taste is sweet maltiness of course - some of the flowery fruitiness comes through the nose when drinking. There is enough malt body and carbonation to maintain a delightful drinking experience. The high alcohol content has stretched the duration of this 22 oz. bottle into multiple hours. Drinkability is good.

Tried Arcadia's Big Dick's Olde Ale and this back-to-back. This beer is the better of the two, however, like the former beer there isn't much distinctive character. I would recommend this beer however.

A- Pours a ruddy/silty brown into my Bruery Tulip. Nice copper tinted head that fades fairly quickly, but it leaves a decent amount of lacing dripping away.

S- Caramel Candy-Corn! Damn! Has a nice malt and mineral backround. Light touches of winter spices, toffee, brown sugar, molasses, vanilla, licorice and just a faint hint of the booze. Almost seems as if it's been BBA'd. Really nice depth as it warms up!

T- Touches of sour raisins and fig, caramel, and burnt brown sugar. Taste doesn't quite match the nose. Some nice licorice/basil notes, but the sourness is throwing off the caramel and sweet candy.

M- Decently thick and oily, better carbonation than expected. Nicely sweet, but the tartness is losing me a little bit.

O- I would of rated this much higher if it weren't for that sour fruit. Nicely spiced, nice oily mouthfeel. I had higher hopes for this. I'd like to have some of this to age and see what becomes of it.

My first barleywine, very good, enjoyed it! The taste changed from first opened to finish. As it warmed the complex flavors became more noticeable. The higher alcohol content wasn't prevalent at any time, which surprised me.
A-dark amber in color, pours clean with very little foam, not a lot of carbonation apparent
S-not very pungent, slight hints of fruit and malt
T-warm, fruit flavors, some malt taste as well. The flavors became stronger as I drank it and it warmed. Much smoother than I expected. Does have a pleasant aftertaste, alcohol doesn't take over
M-thick and silky
O- very enjoyable

I was really looking forward to this barley wine and left somewhat dissapointed. A toasty brea colored tannish brown with a nice large tan head that held up for a minute and left some lace down the glass.

Aromas were of toffee malt and a buttered biscuity smell. Hints of bitter hops as well.

This Barley wine was a little thin and dry. Predominantly a caramel, dried fig approach with toasty, buttery finish. Finish is thin and somewhat bitter.

This bottle had a year on it when opened - pours a golden, toffee color. The aroma is slightly oaky, with a sherry like nose. Easy sipper - the complexities open up as this warms. I feel that with a further year on this it would be even better. Lots of sugar and dried fruit/candied fruit elements here that I would be interested to stack up in a year or so.

Pours a ruddy cola brown to dark copper and amber, somewhat murky/cloudy, with a one finger light tan head. Aroma is ripe fruitiness, ripe berries and some alcohol , also some raisiny and caramel aroma. Flavor shows more ripe berry and prune flavor mixed with a sweet malty and caramel breadiness, cereal, followed by a good dose of alcohol mixed with a decent amount of hop bitterness. Medium in body, somewhat sticky sweet although it seems to thin as it sits in the glass, a peppery spiciness cuts the body along with an alcohol and hop dryness in the finish. Nice beer, maybe somewhat hoppy for an english example of a bw, definitely belongs in the big beer series, alcohol is very present throughout.

Bottle into a Madtree snifter. Pours a deep, reddish-brown; looks like liquid toffee. Opaque, and mahogany in color in the glass. Despite the small glass, I was able to get about 1 finger of head, cream-colored, which bubbled down very quickly. Lots of carbonation bubbles hanging into the glass walls. Strong aroma, whoof. This beer is currently sitting about 2 feet away and I can smell it as if it was under my nose. Figs, raisins, dark fruit, and English toffee are the main flavors I'm picking up. Upon further investigation, I'm detcting notes of toasty malt, caramel, molasses, and vanilla. Pretty complex aroma here. Upon tasting, I'm met initially with a steady set of 'typical' barleywine ingredients. As it warms on the palate, though, this beer unfolds a little. Caramel, toasted malt, toffee, ground ginger & cinammon, dark fruit, figs, raisins, and vanilla all have a role to play. Actually quite tasty. There's enough complexity here to make this one a definite sipper. A little booze on the finish, and a little dryness on the aftertaste. The only downfall, in my opinion, is the rather thin mouthfeel. In terms of feel, this ain't no Bigfoot or BCBBW. What it is, however, is true to tradition. This is an English barleywine. And while it may not be as heavy-a-hitter as the aforementioned, it is very good for what it is. I feel this one's underrated, given the style.