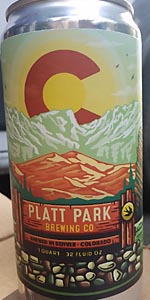 On tap at Platt Park Brewing Company. I believe the first time I had this it was billed as a west coast IPA. This time it was an IPA with only Mosaic hops. Strange tasting beer, not like other mosaic single hops and honestly not interesting. Aroma was hoppy but boring, how is that possible? Colorado has so many good IPA's on draft and in the stores that you better come with your A game, an average IPA is not going to cut it unless you are in a yupster neighborhood. Oh wait.

new ipa in the house here, very similar in tropical hop complexion to the phaded pale, just more of it. the best feature of this one is the nose by far. the hops are so juicy and lively and fresh, maybe citra and something southern hemisphere, high alpha and really brimming with oils. the flavor though doesnt produce that same mouthwatering hop intensity, and fades out quite a bit from the aroma. bitterness is mild, and the pale grain base keeps it really light and drinkable. i wish the hops would taste a bit more like they smell in this one, because the nose is really sexy, but its so muted in comparison as to almost be disappointing overall. i do like the beer, appreciate them continuing to experiment with the ipa style, and think these guys have already come a long way in just a year or so.