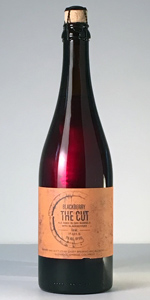 Vibrant and nearly neon hazy red with a fuzzy pink head of tiny bubbles that settles to a fine, faint film.

A potent and bright nose of blackberry lemon-lime transitions to copious blackberry on the palate with oak, barnyard funk, grass, hay and blue cheese.

Frothy and light with a crisp, semi-dry finish.

Draft pour at Hooch in Aspen.

Smells like raspberry to me but what do I know? Jam-heavy. Tart. 4.5

Well, flavor threw me for a loop. Sweeter than I expected. Fruity, preserve-like and then veers tart with the berry-flavor. I am not the refined palate to tell you this is blackberry over raspberry, but it is sweeter. And effing delicious. 4.75

I'll reiterate this is sweeter than many Casey beers, yet tart as one would expect. Prickly up front and then smooths out and settles fuller-bodied on the tongue. 4.5

as good as this is, i still had higher hopes for it, which is maybe a signal that the hype is real for these beers now, more than ever. i for some reason expected a much richer deeper purple color, its just pink and relatively light in shade at that. heady though, and effervescent, and smelling like a million bucks with a ton of woody funk to it and more sourness than i remember from oak theory by itself. the taste is all of the above, and he does a pretty nice job of extracting real identifiable blackberry flavor from a beer that is still extremely dry. anyone who has ever tried to homebrew (or even commercially make) a dry blackberry beer knows its easy to ferment out all the fruit flavor for the mission of dry. this is beautifully done here, but still probably sits somewhere between an almanac and a jester king in terms of blackberry radiance. carbonation is awesome, i love the feel of all of his beers. id like to try the rest of the series, the fact that there is so much fruit in it, for me anyway, is not readily apparent, but the beer is darn good and should be consumed rather than squirreled or traded, its really good right now.

edit: just had a different edition of this, called triple crown on the back, maybe a little older, its drier and the fruit is even more pronounced. i think the yeast is more nuanced too, i liked it better than i remember liking it the first time i had it. a different fruit? extended ageing? just more bottle time? in any event, this is delicious beer that i may have been a little too harsh on in the above review when the beer was brand new. get some if you can. loved the pulped up chunks of fruit in the bottom of the bottle, pretty raw and awesome.

Light red with a short lived white head. Smells fruity and tart and inviting. Flavors have full big fruit extract and lots of body. This continues along the great lines of all (most?) Casey brews.

Pours a murky light red with a foamy bone head that settles to wisps of film on top of the beer. Small dots of lace form around the glass on the drink down. Smell is sour with grain, berry, earth, funk, and acidic aromas. Taste is much the same with sour grain, berry, earth, funk, and acidic flavors on the finish. There is a medium amount of acidity on the palate with each sip. This beer has a good level of carbonation with a crisp and dry mouthfeel. Overall, this is a very good beer with awesome but fairly intense sour berry characteristics all around.

Sampled at the Casey release in GWS. Date is off as I am entering from notes. Beautiful light purple beer here with a fine white head. Nose is subtle in that it reminds me of the smell when I had to trim my Blackberries at my former home. Woody berry sweetness. Taste follows as a delicate melding of woody berry character. World class beer here.

Only complaint is it had Very little blackberry smell or taste. For a beer advertised as heavily fruited, not much came through. That's not to say it isn't a great beer; it is. But it had much less of a fruited characteristic than other blackberry whales. Don't want to obscure the point here though: this is a very, very good beer.

After having a bottle not on the release day, I gotta say this is great!
Very drinkable blackberry goodness! Seems the pour I had at the release had more of a murky characteristic. This time, it was very beautiful and a translucent blackberry hue. Delicious!