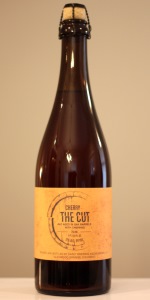 More fruit does not necessarily mean a better beer. This bottle poured light and thin, the fruit had faded, and the nose was all Casey funk. Disappointing.

This one traded high and delivered low on flavor and overall enjoyment. Stick to the Family Preserves. The Cut series is not worth the price or the hype.

This is a really lovely beer. Poured in a tulip glass there is a gorgeous red-orange glow, effervescent with a quickly dissipating head. Compared head to head with Cantillon Kriek. A similar scent of funk and cherry, though perhaps only half the Kriek funk. Actually preferred the taste of the Cut to the Cantillon, although mouthfeel goes to the Kriek. Actually the pairing of the two was better than either alone. Overall, a terrific cherry flavored funky sour ale. World class result. Get it if you can

Pours a light pink color with half and inch of foam that subsides to a ring around the glass.
Smells of funky cherry juice
The fruit flavor isn't as intense as Family Preserve or it is countered strongly by the funkiness. I guess that is the Oak Theory base revealing itself versus the fruit despite having more fruit in it than the Fruit Stand beers. I wonder if Casey is going to up the ante and add more fruit in the Cuts as well. BRING IT!

Maybe it's me, but I loved it. Feel free to trade them here. Color was pink, nothing special, but the aroma was surprising. Nice amount of funk, subtle cherry. Taste out of the bottle was the same, initial funk with cherry on the back, but felt a bit thin to me. However, that's me being picky. As it warmed the funk becomes subdued and more cherry is pronounced. I thoroughly enjoyed this.

The bottle opens with a bang. The initial pour yields a half inch head which fades pretty quickly. The color is a vivid red/pink. The aroma is really nice. A healthy dose of funk, sour, and cherries. The taste is strikingly similar to fresh Cantillon Kriek. Lots of funk, a moderate level of acidity, and a nice amount of cherries. Overall, I'd place Montmorency Cut in the same realm as Blackberry Cut whereas Balaton Cut is just on a whole other level. This is a fantastic beer though, and is well-worth seeking out!

I don't know if it was me, but I wasn't feeling this bottle too much.

Lot of lambic qualities on the nose, cherry felt a bit medicinal at first but then faded as it warmed. Really cheesy on the taste though, and not in a good way, at least to me. Kind of like those cheddar cracker sandwiches you get out of a vending machine.

Would've been a pretty good beer had it not had that cheese thing going on, but not as good as MvB, or any kriek that I've had.

Didn't have The Cut: Balaton fresh, but I'm guessing this is even more cherry forward. My advice is to crack your bottle in 2+ months, hasn't lost much cherry character since the release.

Montmorency cherries are probably my favorite additive in beer, but this was just too much. Tasted like eating a straight cherry. That's not a bad thing, but it almost completely covered up the funk. Sour is slight, but pretty perfect for what the beer is. Just too much cherry and not enough funk.

Had the Balaton version of The Cut last week and that was near perfect. Want to say that version was bottled in February, but it was added to BA in March, so we'll say March or April. Whatever its age was, it was almost perfect. Very balanced, otherworldly cherry character, just something very special. I'd imagine The Cut: Montmorency will get there, it just needs some time. Still very, very good, if you couldn't tell from my rating. It's just that I judge Troy based on his previous beers, which have been some of the best in the world. And if your favorite type of beers are ones that taste just like fruit, with a little sour twist, then this will probably be the best beer you've ever had.

A nice deep salmon color with a small white head that recedes to a collar that leaves good lacing.

The aroma is very funky, with lots of barnyard and horse blanket. This is followed by sharp, tart cherry. Mild sweetness is picked up as well.

Moderately to highly tart, but not too acidic. Very nice cherry flavor, and nice yeast character. Barnyard funk and a nice oak character round this out.

Another great fruited sour by Casey! Not quite as good as the Balaton Cherry version, but still fantastic!

Likely one of the best brewers in the county making stuff that he knows the current drinking public really wants. All Casey beers are simply delicious, well made and hard to get! This one is no exception. Just a wonderful rich cherry character all around - not one of those watered down fruity things but a beer with real cherry and fruit character all around. You want to drink this one. End of Story.

Thanks to Wowcoolman for sharing this one at GRG1313's tasting.

Pours a murky light red with a foamy off-white head that settles to wisps of film on top of the beer. Small dots of lace form around the glass on the drink down. Smell is sour with grain, cherry, funk, and acidic aromas. Taste is much the same with sour fruit, earth, hay, funk, and wood flavors on the finish. There is a mild amount of acidity on the palate with each sip. This beer has a lower level of carbonation with a slightly crisp mouthfeel. Overall, this is a very good beer with a really nice sour fruit and funk combination all around.

Pours a light pink-reddish body; kind of like watermelon flesh in colour; one finger white head with a nice retention, film and lacing. A very pretty beer. Smells faintly of cherry skin, a bit of lemon, wheat. It honestly just seems a bit bland, almost chemical-like. I'm not sure what it is, but I was hoping for a couple dozen cherries here; like Lou Pepe Kriek or Hommage. Flavour is a bit better as it warms up; more cherry skin, mildly sweet cherries, oak, and even a bit of lemon. Mild funkiness. I really don't get the rAvg of 4.71 as of this writing here. Mouthfeel is medium bodied, a bit overcarbonated, dry and refreshing just the same. Mild cherry skins on the finish. Overall, I was really hoping for more cherry here based on what I heard about Balaton Cut. It's worth trying, but honestly, it's just a little fruitier than the recent Montmorency Fruit Stand.

Perfect balance of funk, tart, and ridiculous cherry aroma/taste. Could drink this all day without losing teeth enamel or getting bored. The first of The Cut series I have tried...if this is indicative of what we can expect, seek all of these out!

Looks like cherries, smells like cherries, you'd never guess it even tastes like cherries, but fresh cherries, not jammy... mixed with Oak Theory an incredible sour base aged on neutral oak, which I think helps accentuate the fruit. About two fingers of white lacing that doesn't stick around. Not great head retention, in part I presume to the ridiculous amount of fruit? I've never smelled such a strong cherry aroma before, this beer is fresh cherries in a glass without being cloyingly sweet or offensively sour, great balance and can't wait to see how this develops.

Pours a light pink color and tastes of tart cherries with a mild funk. Not overwhelming at all, in typical Casey fashion, everything is well balanced.