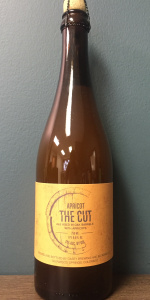 Notes: Made with Perfection apricots
View: Beers | Place Reviews
Reviews: 9 | Ratings: 66 | Log in to view all ratings and sort

Bottle: Poured a hazy yellow color ale with a medium size head with limited retention. Aroma of tart and sour notes with some oak and light fruity notes. Taste is a mix of tart notes with some oak, some acidic notes with some light funky notes and subtle notes of apricot. Body is about average with OK carbonation. Interesting and complex but lacking some attenuation.

Thanks to Sheldon I believe for bringing this to March Madness one of those years. Finally getting around to writing a review for my favorite fruit to use in beer: Apricot, this time, from the Cut, the Casey Cut.

Pours a cloudy apricot colored beer, cork had a nice pop to it, carbonation comes in appropriate, fine 1/3" white head on the top. Aroma smacks of a tiny amount of brett, plenty of apricot. Does good.

Taste, plenty sour, plenty of apricot. Firmly entrenches itself in the second tier of apricot wild/lambic ales. Not gonna bump Fou or Westly. But it can bang amongst the Cascade, Filmishmish, Monk's Veloco-whatever, Map of the Moon/Sun Rare Barrel stuff. Doesn't make sense to go after this one though, 'rare' and all, so much easier to get the comparable stuff. Nice and crisp, light body. Oak is mellow.

Pours a beautiful cloudy golden yellow body, perfect two finger white head with the right amount of lacing, medium film and moderate collar. Looks just about as right as it could ever be. Smell is of rich apricot, oak, light funk, lemon, apricot juice, stonefruit skin. Heavy fruit aromas. Really nice. Flavour is a moderate lactic acidity, fair bit of oak, lots of lemon, tons of stone fruit and apricot juice. Really nice. This I think is more of a true stone fruit wild than Leaner is. Mouthfeel is medium bodied, good carbonation, crisp and dry without being too sour. Plenty of fruit sweetness to balance out the sourness. Overall, one of my new favourites from Casey. Really nice balance of fruity sweetness and tart acidity with a touch of funk, just the way I like it.

750 mL bottle. Hazy yellow body. Smell is sharp apricot and lemon acidity. A bit of burnt rubber. Taste is quite sour. Sour apricot. White wine. Oak. The burnt rubber flavor isn't as strong here, but still pops up in the finish. Light body with an aggressive sourness. While this one is better than the others from The Cut series, it still has some unpleasant flavors.

A-The beer is quite murky and light orange-yellow in color like you would expect. There is no head despite my slightly aggressive pour (and high elevation). The beer is still in the glass and appears a bit flat.

S-The aroma is very tart; almost downright sour. Sweet tarts come to mind. The fruit flavor, however, is very apparent with nice apricot smells. I get a little bit of funkiness and some oak, but the sourness overpowers most of the subtleties.

T-The taste is similar to the smell. Lots of acidity with a little hint of toasty oak and a mild dose of funk. This may be the most sour Casey beer I have tried to date. It is good, and the apricots show nicely, but it doesn't live up to the complexity of his best beers.

M-The beer is damn near flat. (Sad face). I know that Troy had issues getting this one to carb up, and I think the lack of carb really hurts here.

O-I think I, like everyone else, was really excited for this beer. A Colorado Fou Foune! But this one just isn't there. It looks, smells, and tastes good, but it lacks the complexity of Casey's best fruit beers and the lack of carbonation really kills it for me.

It's difficult to get much better than this, but I really enjoy apricots. This was the most tart Casey I've had. The color was a light, hazy yellow/straw in nature. Aroma was apricot and funk with a subtle tartness. Taste was heavy, tart apricot with a mellow funk. Carbonation was mild but lingered throughout my glass. I can't wait to see what a bit of time does to this. I loved the Fruit-stand but for my taste, the base beer in the Cut series really let the Apricots shine even more.

Fantastic beer. Taste follows the nose, booming apricots, mild funk. What this beer lacks is carb, but we knew that going in. I I still prefer Apricot FS however

Bottle shared @ Casey on 8/1/15
Bottle had only been conditioned for 5 days so carbonation was very low. This was a taster for upcoming release, but still blew me away. Pure Apricot Juice with mild funk. Can't wait to revisit this beer after a few weeks.