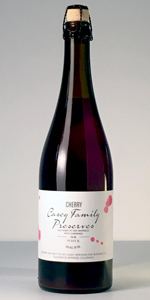 "Ale aged in oak barrels with cherries." 6% ABV. No explicit style designation appears on the label, but their website says "Saison base beer aged on whole Colorado cherries at a rate of over 2 pounds per gallon."/"Blend of 4 different sweet cherries from the 2016 harvest."

Served cold into stemware and allowed to come to temperature over the course of consumption.

APPEARANCE: No head forms when it's poured softly, but there is a brief bit of pink cream that floats on the surface of the body before fizzling away inside seconds. Leaves no legs or lacing on the sides of the glass.

Body colour is a sanguine/blood red of average vibrance. It's nontransparent given the darkness of its hue, but filtration seems evident and it's translucent. I see no yeast/lees at the bottom of the glass after a single pour from the bottle.

AROMA: I do get some subdued oak, but this isn't rich with oak and doesn't seem to try to emphasize it...I think Casey is of the mind that oak is used to hide flaws and they seem reticent to commit to oak fully. Depleted cherry is obvious but this isn't rife with fresh cherry/bright fruit flavours...the cherry's sugars have clearly been converted and this isn't a jammy or (contrary to the beer's name) seemingly even a sweet fruited saison.

Woodsy notes, tannin, wild yeast. I don't pick up on any overt bacterial aromatics and it's not microfloral. This aroma suggests a subdued fruited saison that doesn't go crazy with true spontaneous fermentation and isn't trying to emulate traditional Belgian expressions of the style. Based on the aroma, it's really more an American wild ale/sour ale than a saison proper. I don't pick up on any hay, grassy hop aromatics, heavy brettanomyces funkiness, barnyard notes, sour apple, Fantome-like spice/herb, exotic grains (e.g. grains of paradise) or the like...the base beer may be a saison, but this doesn't seem to be.

Aromatic intensity is low. Lacks the intricacy you'd find in the aroma of something like Saison Dupont, Fantome, or the like.

TASTE & TEXTURE: Medium-high acidity accents this beer's otherwise mild sourness, imbuing its dull cherry flavour with a bit more life. Oak is present throughout lending it natural cohesion, but it isn't a rich white oak and doesn't have any toasted flavours or anything notable; Casey didn't commit to the oak but it works to unify the beer's flavour profile.

Brettanomyces? It's there but it's faint; this doesn't run amok with the funk. There's no intricate spice and/or herb profile; this is clearly not targeting a Fantome-like saison flavour profile.

Fruit is the emphasis, and I do dig the cherry flavour at the heart of this beer, but I'd prefer more sharp tart cherry varietals to what this is bringing, which is more of slightly jammy but ultimately straight up the middle cherry flavour. This is sort of the opposite of how a brewery like Cascade would execute cherry, and the absence of bacterial flavours, microfloral intricacy, and concomitant bold sourness leaves it feeling less like a saison or American wild ale and more like a beer that sits somewhere vaguely between the two styles.

I guess I wanted a cherry flavour that was either jammy like a Napa Cabernet or sour and tart like many of the great Montmorency sour ales out there. This leaves something to be desired.

OVERALL: Of course it's good - I mean, Casey Brewing & Blending might be the best brewery in the state. But it isn't great despite its obvious quality, and even ignoring its spurious designation as a saison doesn't help me feel comfortable giving it a rating much higher than a B. I want a better core cherry flavour, I want more oak, I want more brettanomyces, I want bacteria, I want microflora. I'm absolutely glad I bought a bottle and would probably buy more at $15 or less, but as solid as it is it just isn't up to snuff with Casey's best.

Pours ruby red. Tartness with a finish that may be longer than Balaton Cut. A big tarter than Cut and a hint below in flavor. But still an excellent brew reminiscent of the great Belgian farmhouse/sours.

On tap at the Falling Rock during GABF week. Bright pink color, almost no head. Aroma is dirty funk and not something I like. The flavor is pretty nice, good cherry aspect, only mildly sour, very drinkable.

The feel of this really stood out. Color was a very deep red, I got almost no head in the pour, but that's fine. As this warmed, it was very much cherry pie type flavors and very reminiscent of a kriek. Full of cherry aroma and flavor with an undertone of funk that really complimented the beer nicely.

Super dark red color. Pours a thin half inch of foam that disappears to a ring around the glass.
Smell is really funky from oak base, I guess. Yet, this is more funky that the Fruit Stand version.
Full cherry flavor that benefits from the additional fruit Casey added to this line.

Probably my favorite of Troy's Cherry beers thus far. Nice sweet cherry flavor that has a nice complexity. More complex than the sour balaton family preserve. Not too tart/sour which I like. Wish I had more!