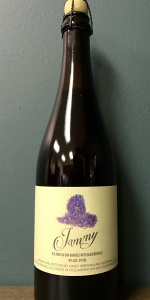 Notes: Jammy is a Saison that was fermented and aged with mixed cultures from both Missouri and Colorado in French Oak wine barrels for 8 months on Missouri blackberries before being naturally conditioned in the bottle.
View: Beers | Place Reviews
Reviews: 8 | Ratings: 63 | Log in to view all ratings and sort

This one pours a nice vivid purplish color, with a small head, and lot sof lacing.

There's a ton of blackberry on the nose here, but not much else. This seems a bit simplistic, compared to what they are usually capable of.

The blackberry is expressed quite well here. However, it seems to be missing that certain something that all Casey beers here - that extra oomph. It's pretty basic and simplistic, unfortunately, as the blackberry is about 99% of the flavor.

This is light bodied and pretty drinkable, with a soft level of carbonation.

Maybe I'm spoiled by all the Casey I've tried lately - but this is just a bit basic.

On tap at Casey.

A: It is a beautiful purple.
S: The fruit is very prominent on the nose.
T: Tart. Delicious. I think if I had known nothing of the beer I may have thought it was made with plum rather than blackberries.
M: Slight bite of carbonation in line with almost all the Casey beers I have had.
O: Really great beer. Very fruit forward but balanced.

On tap at Casey 8/24/17. Pours a light maroon to slightly purple. Large silky lavender head. Nose is of sour berries. Blackberries and blueberries. Taste of berries up front with slight funkyness from the yeast. Nice bit of oak to it. Very clean beer. A bit over carbed but wouldn't expect that if this was the bottled version. Nice dry, tart and crisp sour.

750ml cork and caged bottle. Served in a Casey EF stemmed glass and consumed side by side with the Side Project version. Pours a medium lighter rose-purple body, one finger white head, fair retention, bits of lacing and collar, but for the most part does not seem as bubbly as its Side Project twin. Smell is a complex vinous character, oak, fair bit of lemon, tart blackberry skin, that Casey house aroma (sort of like sour peeled grape skin that I notice a lot in the cherry fruit stands), moderate vinegar acidity. Smell is really very nice, like savoring a nice natural wine. Flavour throws you for a loop though, it becomes a more deepthroated jam, with more blackberry tart skins on the palate, more vinegary tartness, touch of lemon zest and less of the vinous character. Very nice, but on the backend it seems to let up a little too early, it's not quite watery but it seems to lose a fair bit of oomph; it would have been nice had the jammy blackberry flavours persisted longer, or even the lemon. Mouthfeel is medium-lighter bodied, and as stated earlier, the flavour tapers off towards the end, and sort of becomes a bit watery. Weird. Overall, this was a nicely done blackberry beer but the Side Project version I felt was more interesting and drinkable even though it was a bit less complex.

its been very well established that the overall quality of these casey beers is absolutely at the very top, no denying it now that they have had some time to find their feet, expand their offerings (enormously), and get at least a few different flavors in all of our mouths. i am full on board this train, and it was a pleasure to get to drink a bunch of these in one go. i find the name here odd, jammy, it seems like some of the other blackberry beers they do are more intense on the fruit, maybe the relative acidity of some bring it out more, this doesnt seem like more fruit to me (not sure it is, just something the name seems to suggest to me), and the blackberry definitely seems less intense than say the peach in leaner, but it also seems to showcase a different aspect of the blackberry than we usually see, which is the deep purple sweetness these have, its not tart (from the fruit), not even summery really in its vibe, but it has this really condensed natural blackberry preserved thing going on, really nice. blackberries also dont smell like much, go smell one, i dont think its a great critique of this to say it doesnt smell like the fruit, it smells instead like all the wood and wild funky cultures they use, and thats just fine with me. a familiar yeast profile from casey here in the flavor, sort of a signature thing now, like you know a jolly pumpkin or jester king yeast profile when you encounter one, even without knowing what the beer is. this is sort of like that, different but still known. very well balanced, grainy too which is cool for one of these, and oddly soft in overall complexion. surprised to see its as strong as it is, one of the strongest beers i have seen from these guys, but not a trace of it. worth acquiring or seeking out, uniquely casey, which is of course a great compliment now...

edit: had a bottle from august 2018 last night, about exactly a year old, and its more striking and compelling to me now, even than it was before, with a more distinct blackberry taste in the middle when it comes up to temperature, lambic type fermentation complexity in that window too, and some strong red wine notes with the fruit. just really good, better than i remember it, and not too sour at all. really good a year old! thanks to drlovemd87 for the bottle!

Had this at a share. Will admit that it was a bit of a let down, but expectations were through the roof. The flavor profile is very simple yet well done. Had a big pucker to the sour. I was expecting one of the best sours I've ever had, but it was only a top 50 sour for me.