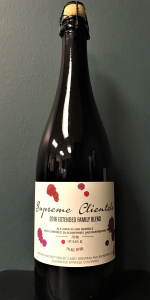 One of the better Casey beers, Supreme Clientele is aggressively sour and more fruit forward than most of their bottled offerings. This is a beer worth acquiring at retail price.

750ml cork and caged bottle. 2016 vintage, Member? Bottled 10/20/2016. Served in a Casey stemmed glass. Pours a dark purple body with a fairly strong reddish hue; one finger thick white head, short retention, not much lacing. Pretty typical for a Casey beer. Smell is a rich fruit blend; it's like Koolaid or a fruit punch except the fruit tastes legitimately genuine. It's weird to describe, but it's kind of like a fruit roll up aroma. There's a bit of lemon, brett and leather, moderate vinegar acidity and a touch of oak, of course, but the fruit is dominant here. Flavour follows that aroma; and even more so. The fruit is heavy; it's got a fair bit of that raspberry more so than the other fruits; I think the moderate tartness is more so the blackberry than vinegar, that seems to contribute a bit of dryness. The cherries contribute a little more complexity rather than outright flavour; this beer certainly exhibits the rich raspberries up front. There's the signature Casey saison funk, lemon and touch of grapes as well. Bit of oak, leather rounds things out. Man. Mouthfeel is medium bodied, good carbonation, though it would be nice if this one was a little more lively. Moderate vinegar acidity on the backend to accompany the raspberries. Well, this was a damn tasty blend and I enjoyed this one quite a bit. One of the better Casey beers I've had.

I've had a LOT of Casey beers, and this one packs more fruit than any other, hands down. It pours a thick, turbid, crimson red/purple color. Loads of fruit in the aroma. In my first sip, I picked up prominent cherry. As the beer warmed, I got a lot more raspberry and blackberry. All fruit components were distinctly present. The body was great, perfect carbonation, and moderate acidity. If you're a fan of really well-executed fruit-forward beers, do yourself a favor and track down a bottle of this.

another casey gem, this one is a three fruit blend, and despite the different proportions of fruit in the blend, the coolest feature of this beer is that no one fruit trumps any other, they come across perfectly integrated, equal players and contributors, and almost synergistic to the point where the cease to be distinct and identifiable in their own right, which is pretty darn cool! its a little pinker than blood red, but some real nice depth of color to this lightly hazed foamy brew. cool to find it on tap too! quite uncommon i have to imagine. the thing about this one, as awesome is the fruit all is, is that its way more fruity than wild, which is something most casey beers have avoided to this point, they have always, at least to me, seemed to be yeast driven with fruit behind it, even when the fruit is intense. this might be the first one of their beers i have had where the fruit is more forward and flavorful and commanding than the yeast is, which is not a critique but rather a mostly neutral observation. sweet and tangy, without the mature dry funk of their best offerings, but still a beer if impeccable balance and overall quality. its a shame there isnt more of this around, everyone should have the pleasure...

edit: same fruits in the 2018 edition, which has a much brighter and redder color than i remember this one having, and seemingly more raspberry in the blend, but a really tart and refreshing beer that almost drinks like a soda there is so much carbonation and fruit to it. i dont know if 2018 needs a separate listing or not, or what the process changes were, but this is an entirely different beer, equally awesome!

Now this was something. The blend of the different fruits made this the best thing Casey has released to date. It makes for a complex fruit cocktail of sour goodness in your mouth. Damn good.