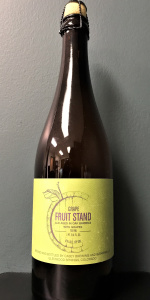 Poured as a hazy yellow color with bubbly white head on top. The head fizzes away quickly leaving a subtle ring around the edge of the glass. The smell of the beer is bright and citrusy. The taste has a fruity flavor, some tropical notes are in there. The beer has a very subtle tartness to it. The feel is light bodied and very refreshing. Overall this beer is killer. Loved it!

ive long thought white grapes would be a nice fit for a wild beer like this, grainy and dry and mature on the yeast side, but subtle and soft still, approachable and not too sour, but quite complex in its overall quality, and just waiting to absorb a fruit like this. this seems overall more sour than other fruit stand beers, still bretty and funky and horsey even, but this one has some nice acidity that seems to be as much grape derived as it is bacteria, but the fruit is also sweet in it, so its sort of a full circle flavor profile and definitely full circle on the mouthfeel. these grapes have an almost dessert wine aspect in this beer, sweet and natural tasting, with a nice wheat malt base on display and the wood, which is robust and tannic here, and there are some hops too. a slight white vinegar thing, its sourer than others without a doubt, but the grape flavor is super authentic and just really good. it seems for a moment before the finish to be a little less complex than other fruit stand beers, but the grapes are really distinct, and i think more of these white grape sours and wilds need to be made, the togetherness of the beer and the fruit is so second nature, more brewers should play with it. overall its killer, well carbonated and dry, but too sour to drink a lot of and a bottle thats better shared than solo missioned. i liked it a lot, but how could you not?! weird beer, must try.

A-The beer is mostly clear and very light in color. It shines in the light and looks a lot like white wine. The short, white head fades immediately to a collar and leaves no lacing. Carbonation is active in the glass.

S-The aroma hits my nose with a serious punch of sulfuric, acidic sourness. After letting the beer sit for a minute, the sulfur note fades some and a bit of fruit comes through. I pick up lemon curd, peach, and a little bit of oaky vanilla. There is a mild cheesy funk too. A bit underwhelming.

T-Fortunately, the taste completely lacks the odd flavors that I smelled. Instead, I get a pleasantly sour beer with moderate levels of acidity, but a lot more fruit than the nose led me to expect. I'm picking up tart, vinous white grape; some vague tropical notes (guava maybe); and sour pear. I'm not picking up much oak, just a little vanilla and almost no funkiness.

M-The beer is medium to lighter in heft. The carbonation is slightly creamy and soft for the style. It drinks really nicely.

O-Troy mentioned that he liked this beer while I was picking beer up at the brewery and I can see why. The smell is a little odd, but the taste is complex, nicely sour, and subtly delicious. The feel is really good, too; lighter but with enough heft and carbonation to break up the beer on the palate. I like this one.