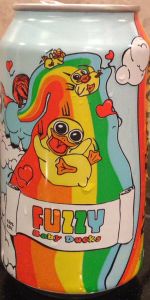 I've never looked more forward to a beer and I've never been so disappointed in a beer. I had a friend in school near NE Brewing for 3 years but he was never able to get any to bring back home. I've been to the brewery, tried some of their other beers, liked most (some a lot) and bought a growler of one of their beers home. I was just never able to get Fuzzy, so when I finally got it, I was excited.

I poured it into a standard clean pint glass every time. It looks fine, not too hazy, a little amber for NE style but fine. It did have a nice head. I drank it at 38, 43, 48, 53 degrees and above. I drank it before during and after food. I drank it as my fist beer in all but one occasion. I drank it several times with 3 beer friends (one serves part time at a brewery) of different ages who really know beer, mostly IPA's but stouts and sours too. I drank it 3 days old and several times over 5 weeks hoping for something more.

It's not very juicy. It's not very dank. Hop presence is decent but I prefer more evidence of dry hopping. It's a fine beer, a decent IPA, sort of old school style, something I might grab off the store shelf that had been sitting in the store for a few months but not something I'd wait in line for. I don't get the 4.5 (99) and the 44th best IPA anywhere.

I've had several IPA's from both Tree House and Alchemist and a lot of different IPA's from Aslin and Veil in VA and this just isn't in the same class as most of those beers and I am speaking specifically of beers in the 6-7% range to be fair.

This IPA is the definition of hype. Have to admit, I got swept up and traveled well out of my way just to get to a bar that had it on draft. Barely found a parking spot.

10 oz pour for an embarrassingly high price. All for a citra IPA the likes of which can be had easily from several other northeast breweries with a lot less hassle.

Not that its not great, but its not even the best IPA made by Nebco.

S- This beer has an extremely impressive nose. Intense passion fruit, grapefruit and oranges- the unmistakable aroma of Citra which seems to be overdone in brewing these days yet the Citra shines so well here. Just enough grainy pale malt sweetness to balance out the resinous nature of the hops. Ridiculously lush, fresh and juicy. [5]

F- Grapefruit, passion fruit, mango. Tastes juicy and rich. The pale malt stands out of the way the entire time, just enough to keep the hops from being overwhelming. A very nice citrusy and grassy bitterness on the backend that really cleans up the palate and sticks around for a while. This is really tasty. [4.5]

M- Medium bodied, soft, perfectly carbonated, smooth and incredibly crushable. The grassy bitterness provides a great balance without getting in the way of drinking this beer. This is very drinkable, no doubt about that. [4.5]

O- One of the best Citra IPAs I've ever had. Overall in terms of IPAs I definitely have a preference for Tree House Julius, especially since FBD has been such a pain to get. But this is definitely worth seeking out. One of these days I'll be able to do this side-by-side with fresh pseudoSue, a beer that this one reminds me of. [4.5]

The Ordinary in New Haven delivered. Served slightly cool in a tulip glass. Comes out a lovely hazy golden color, but with minimal head or carbonation. I've had this before a few times and it's always the same case.

Smell is super potent, like rubbing fresh Citra hops in your hand and taking a big whiff. Everything else takes a back seat (very back).

Taste is just amazing IPA through and through. Pure Citra hop juice. Loaded with citrus rind, lemon, grapefruit, and a bitter (but not insanely so) herbalness. Cracker malts peek out every know and then.

The feel is what sends this beer over the top for me. It's really soft, delicate, and so damn light in the stomach. I had 3 at the Ordinary before the keg kicked. Will seek out again but it is not worth the 3 hour line at the brewery.

A- A massive plume of white foam sits atop a hazy orange/hay-colored body. Plenty of lacing is left on the glass.

S- The aroma is an initial burst of tropical fruit, especially passion fruit and mango, along with pineapple, followed by lots of citrus. Tangerine and lemon mainly, with some grapefruit as well. Some pine and bready/caramelly malt are also detected. A wonderful aroma!

T- The flavor opens with a lot of the tropical fruit, but that is ushered away by moderately bitter citrus and pine, and then finishes with clean, crisp cracker-like bready malt. This is very well balanced, but I wish the flavors melded a bit more rather than having such a clear cut progression from one to the next. It should be noted that this growler was over 2-weeks old, so it may have suffered slightly from that.

M- The mouth feel is medium, with not much carbonation. Crisp and clean.

O- This may have been negatively effected by the 2+ weeks it spent in the growler, but if so then this beer is truly world class! Some minor flaws such as less of the hop flavors and carbonation can likely be linked to that. Still an outstanding beer!

Genuinely surprised by this one -- thin, brackish and completely unimpressive.

It's a fantastic beer. Can't give it the full 5 because there are a few beers I prefer slightly more ( THB C-9/Julius, Nebco Ten-er #11). Only had to wait ~75 minutes! Love me some citra hops.

On second taste, I had to adjust my rating down. The reason is I do not care for much malt flavor, and there's some malt action going down on my tongue that kind of distracts me from the rest of the flavorbomb.

This is a really good IPA. One of the best out there? Not. I would never wait in line for this like some BAs have done on a frequent basis. It's balanced, it leaves nice sticky lacing on the glass, and it offers a myriad of citrus notes (if that's your thing). All that said, there's nothing about this beer or the brewer that makes me say, "damn, I've never tasted that before." It's been done, and done better. I like your beer NEBCO, but it's not as elusive as you make it seem!

Stopped by j. Timothy's for a few Ducks. Excellent pout into tulip glass. Nice smooth flavor. Better than Gandhi in my opinion.

Thanks to wittyname again! Growler to pint.

Pours a very hazy soap-amber color with a humble topper of white foam. It almost looks a little soapy. However, it does look damn refreshing!

I smell pitted fruits, citrus, and floral hops. Fresh apricot, dried mango, tangerine, and guava. All of this touched by a rather delicate ale yeast that sweetens the aroma with the smell of oily nut flesh. Malts are candid and quite pale. Some sugar cookie mixed in here. Delectable.

Nice acidic twang of hoppy bitterness upfront, but it cleans up quick and finishes with tropical fruits and attenuated citrus. Guava, tangerine, lemon zest, and papaya make up the fruitiness. Floral notes bounce around. Much drier than the aroma would let on. Very clean and zippy. Absolutely refreshing, too. Super-smooth body accented by some sparkling side-mouth effervescence. Sugar cookie from the nose turned into wine cracker in the flavor. Very pale malts with very little wort sugar to spare. Implied sweetness comes from the fruity hops. Dreamably drinkable. A one-after-another kind of beer.

This is a fantastic IPA. So happy to have been gifted a full growler of this stuff to enjoy during a trying work week. Cheers!

It's a solid IPA but I don't get the hype. Other breweries are producing similar grapefruit-y IPAs like this that are cheaper and much easier to find.