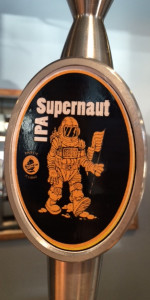 Reviewed by philbe311 from Pennsylvania

Reviewed by AElfwine_Nerevar from Connecticut

L: Pours a pale gold with a light haze. A vigorous pour results in a fine, white finger and a half. The retention is decent. After a few minutes the head has fallen to a 5mm ring round the circumference of the glass with the middle of the glass having a thin film with splotches of thicker head. This head is retained as the beer goes down leaving a thick webbed lacing.

T: I get floral and grassy hops on the front after which I get blueberry and a light, soft, and supporting grainy malt sweetness in the middle. The back end is pineapple and bitter grapefruit with notes of pine and a light herbal dankness. The bitterness on the backend is not overpowering but really balances out the sweeter aspects.

F: The body here is a bit on the lighter side, but still pretty substantial. I would say a medium-light body having medium carbonation. The mouthfeel is a bit creamy on the front end but turning crisp and clean in the middle with the finish having a very nice dryness.

O: I've been drinking this beer since it was first released (I believe as a fat ten-er series beer.) Back in the day this was a revelation. I remember lines for growlers at the brewery. Not in my wildest dreams would I have ever hoped to have six packs in my local for $9.99. Suffice to say it still holds up in my opinion. The balance between the hops and the malt bill is amazing and it really lends itself to an easy drinking beer without sacrificing the "hit you in face with hops" aspect. As noted above it is only $9.99 per six pack and you really can't beat that from a quality to price calculation. Not only that but they are now pumping this out year round so over the last year and a half I have had some in my fridge more often than not. Finally, this is an amazing and fairly unique showcase of what can be done with the Mosaic hop. Many, if not most, single hop mosaic beers are citrus and grass dominated, but the 'naut is one of the few that I've found that has such intense blueberry aromas and flavors (the Super Supernaut takes this to the next level.) Highly recommended!

Reviewed by musicsherlock from New York

Two fingers of billowy, off-white head. Large bubbles that burst. Cloudy, cold-haze orange. Lacing like a doily.
Pines and pineapples on the nose
Great hop bitterness with enough malt backbone to hold up. Good to get away from the overly-sweet NEIPAs. Full flavor
Typical carbonation and appropriately cloying mouthfeel
Awesome IPA. Glad to get back to traditional IPAs again.
Facehugger up next

Rated by Urtravel from Pennsylvania

4.27/5  rDev -1.4%
look: 4 | smell: 4.5 | taste: 4.25 | feel: 4 | overall: 4.25
Drinking from a Counter Weight glass (the irony)
Look... nice beer color with a slight haze
Smell...hoppy lemon dank yeast. a healthy smell pronounced
Taste.... bitter floral grassy with a good bite
Overall... I def want to try the super supernaut I am sure it is better with a little more stank on it...Very solid but I'm somewhat biased because I am not a fan of the session IPAs generally and have yet to have a session that was incredible....someday I hope to find one that is!!!! The search is not over

3.94/5  rDev -9%
look: 4 | smell: 3.75 | taste: 4 | feel: 4 | overall: 4
Poured from a 16oz can stamped "Wolves run in packs BB 9/6/20" to a Nonic.
Fairly clear gold body with a 1-1/2" large bubble white head. Head fades during session, lacing is decent but not spectacular.
Mild grapefruit, mango and dankness on the nose.
The flavor seems like a bridge between East and West coast. A little tropical in the front, hoppy IBU hit for mid and finish. Alcohol is noticeable despite the 5.8% designation. Medium body with decent carbonation.
Respectable beer from a brewery that earned respect a long time ago (relatively speaking).

4.25/5  rDev -1.8%
look: 4.25 | smell: 4.25 | taste: 4.25 | feel: 4.25 | overall: 4.25
Far closer to transparent than opaque and closer to rust than new-age straw gold. Tastes and smells of blueberries, spring flowers, and a bit of sticky resin: a wonderful showcase of Mosaic hops with an old-school clean bitterness that brings hop and malt sweetness into balance. A short and sweet review for a simple beer that can either be contemplated or drunk by the 6-pack
Mar 12, 2020

This one pours a mostly clear dark orange color, with a small head, and lots of lacing.

This is fairly old school, but done well. I don't always like Mosaic hops, but this is done well for me. It's got that typical pineapple and blueberry sweetness, along with just a hint of biscuity malt.

This is light bodied, pretty crisp, and very drinkable, with a nicely smooth and slightly creamy finish.

This is pretty clearly old school, and I definitely like it for that.

The pour here shows about a fully hazed brew, a moderate light khaki cap, that leaves a thicker film, and extensive strands of fine lacing.

Tropical fruits on the nose that come forward are mango, and some melon.

This is a quite tasty and fresh tasting brew, more of the sniff follows onto the palate, with a bit more of grapefruit bite adding to the complexity and intrigue. Fresh cans of NEBCO's IPAs don't disappoint.

Reviewed by mnrider from Connecticut

T/M: Not unlike the aroma. Orange and various juicy fruits. Hops have a slight bitterness. Floral and grassy at times. A little dank and earthy. Medium bodied and dry. Very good mouthfeel. Just the right amount of carbonation.

O: Excellent IPA. Enough bitterness and juiciness to please me. It’s impressive what can be created from a single hop variety.