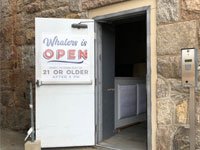 I have been here several times over the years and this place has expanded to fill out their space considerably. Located in a half basement industrial-era warehouse building, the taproom is sectioned off from the brewhouse which is to the left of the entry. Small service bar in the middle of the room and now many tables throughout. Usually 8 to 10 beers on tap; most of the ones I've had are solid. The last time I was there, the place was packed and while I like it better when there wasn't much of a line, It's good to see them thriving.

Awesome operation in an old warehouse/mill area. Seems to be a theme with breweries in this part of New England and I dig it. Wasn’t the easiest door to find, though, but head for the small sign and not the large silo. Inside there’s plenty of seating, several cornhole boards, and a slightly dark but laidback vibe. Gotta knock them for having only Rise for to-go cans and draft selection was just decent. Can’t blame them because demand for Rise is huge and also can’t be mad when Rise is flowing at all times!

Medium large, multi-areas with an open floor plan. Full but not packed on a Saturday afternoon, in and out with a growler in 10-min. Only a hand full of beers to go, 8-9 selections on tap.
One area dedicated to kids, a row of bean bag toss, pool tables and plenty of places to sit at large tables.
Great vibe, South County locals and URI students mostly.

This was a tough place to find the entrance to. You have to drive around the backside of the big old mill complex. the space is very large old warehouse space. they have corn hole and pool tables set up, and some large communal tables. Only 6 beers on tap. You can get a flight that you get the first 3 then the 2nd 3. Two of them were their flagship beers available in bottles and cans. I wasn't overly impressed with the beers - just average stuff. They had two pale ales, an IPA, hazelnut stout, berliner weisse, and hoppy brown ale.

really great place, plenty of seating and amusement opportunities...even welcoming enough to keep the kids entertained. service is amazing...friendly, knowledgeable and fast. have six beers on tap every time i have been there, and the strong ale is exceptional.

This was the one Brewery that stood out. Very cool location, fantastic tour, and the beer was great. There were only 6 beers on tap, which I thought was a little low, but the selection was diverse enough to make each beer count. The guy who gave us a tour was really funny and passionate about how beer is made, and what makes Whaler's what it is.
I Recommend bringing friends, theres lot to do!

Great place in an old mill complex warehouse, the vibe is really down to earth and relaxed. The staff constantly add cool games and activities like pool, cornhole, and recently a massive jenga set (and comfy seating to hang out)! Best part is the consistently good and rotating selection of beer to try, and taking home a different growler every time.

As it gets busy service can take a bit at the bar, but that's mostly because everyone wants to hang near the beer and chat with the staff!

Overall absolutely worth a visit or three!

Anyone with an email address and low self esteem can write a review and magically become Jesus Christ Judge of Beer. That being said, I do not perceive myself as a beer expert with a million dollar palate, I am a regular joe who likes good beer. When on vacation in Rhode Island, we stopped at a few Breweries, and everything was pretty good. Through the grape vine my cousin told me about Whalers, and we were able to stop and try them out.

After a very enthusiastic tour by one of the employees, It blew my mind how their "Underground" Reservoir Dog style brewery was able to yield such a diverse amount of great beer. Two of their beers that stood out:

East Coast IPA- A very well-rounded IPA, with a nice malty body that was complimented by a distinct orange spice rush. Most IPA's are too insane with their hop additions, so this was a nice throwback beer that one could easily drink more than one without funking your taste buds up.

Hazelnut Stout- During the tour, we were told this WILL be bottled soon, and I could not be happier. Stouts and porters seem to be everyones secret weapon, but honestly most of them are just okay for a 4oz. glass. Whaler's Hazelnut Stout was a supr very smooth drinking beer, with a notable dark body and a sweet finish. Staff told me it was considered a "dessert" beer for some. Me on the other hand could drink this anytime. I can't wait to get a 12 pack or a 6 pack of this, just in time for winter.

Overall, Whalers may be a new name in world full of hipster beer snobs, but their humility and down to earth attitude, combined with an impressive recipe list of craft beer, I can see these guys building quite an empire for themselves. I wish them the best of luck, and excited to see them in Summer 2016.

Whalers Brewing Company in Wakefield, RI
Brewery rating: 3.96 out of 5 with 337 ratings