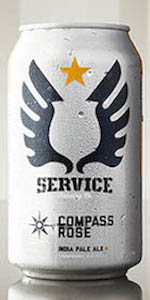 Notes: The Nautical Compass Rose has helped Mariners find their way for centuries. Our Compass Rose IPA honors those who have dedicated themselves to building the proud tradition of our navy.

A refreshing IPA that launches with intense aromatic notes of sweet grapefruit and pear, balanced by a fresh grain breadiness and finishing with tropical notes of passion fruit and orange peel.

A handsome brew that shows off a stunning clarity and rings of lace all the way down the glass. Really juicy with ripe pears and orange rind plus a fresh, grainy breadiness. Lot of balance in this IPA, and still enough hoppiness to remind us that it is what it is. You may not experience the “wow” factor until you’ve quaffed this one back quicker than anticipated and find yourself wanting another.

My local, in-person trader, tone77, headed due South for a while and returned with a bunch of CANs for me in furtherance of The CANQuest (tm)! It is like a twist on the old t-shirts in that my buddy visited the south and all I got was a bunch of CANs. In this case, that's okay by me.

From the CAN: "How Do You Serve?"; "The Nautical Compass Rose has helped Mariners find their way for centuries. Our Compass Rose IPA honors those who have dedicated themselves to building the proud tradition of our navy."; "Like a ship charging across friendly waters, this Ameri[CAN] IPA balances a medium-bodied malt presence with a bitterness that does not overpower. With its hop forward taste and refreshing citrus and floral notes, this is a brew for the high seas."

I am under advisement that these CANs have some age and should therefore be Crack!ed and Glugged gently. I CAN CANply with these directions and so I shall. The Crack! revealed a brimful CAN and so I would proceed cautiously anyway. Once the Glug was underway, I got a finger of fizzy, foamy, tawny head with moderate retention. I noted a slight chill haze as in the previous semi-aged AIPA, so I decided to allow it to warm a bit and see what might happen in terms of its clarity. Color was Amber to Deep Amber/Light Copper (SRM = > 9, < 13), but the haze persisted. The nose was much more dank on this one, but the caramel malt was beginning to assert itself. I just returned from a Chicago junket during which I primarily used public trans. It was incredible to me just how openly marijuana was being smoked, although as a job-seeking asthmatic, I could not partake. It did reinforce my memory of its smell, though, and this beer had it. Earthy, resinous, green, mmm. Mouthfeel was medium to full, big, but not not quite creamy. This was a hophead's dream! Man, it was really dank with a slight cheddar cheese bite. I was getting the munchies just from drinking it. I began to crave Cheese-Its. I CAN't believe that it is only 6% ABV! It really reminds me of a DIPA. Finish was literally breathtaking, thanks to its inherent dryness. I needed a hit from my inhaler as a result. They really hit the mark with this one, although it might be a bit much for the beach cooler. I'd save it for the backyard, the porch or even the kitchen.

Wow. Good level of bitterness and frankly, it tastes just like a pineapple to me. My dad also agrees. Super drinkable. Good job Savannah.

Citrusy and hoppy. Great all round iOS.

T: Big grapefruit taste, slight maltiness at the end for some balance

O: Really good beer from a newer Georgia brewery. I ran into this at a race I ran that the brewery sponsored earlier this month and loved it. Really excited my local beer store started carrying it.

Hop slap in the nose and mouth region! Quintessential IPA...if you dont appreciate the genre, wait until your flawed opinions are statistically insignificant.

Overall, an excellent beer. Smell like pineapple and passion fruit. First sip gives very nice tropical favors, but fades a bit- in a good way- after. Very nice silky feel. Tropical is is the rage in GA right now, but this is a great beer for any time.

Solid looking IPA. Nice foamy head. Smell is excellent. Sticky hops, hints of bready sweet malts, more hops and pine. Taste is ok. Hop profile is nice, but there's a bit of a metallic/artificial flavor. Feel is thinner than expected. Not a bad IPA, smells great but the rest isn't quite there.

Nice citrus/grapefruit smell and taste, not quite enough malt, could use a bit more body.

Pours a fairly deep copper amber with a full fluffy ecru colored head. Nice lacing with each sip. Nose is the typical American pine and citrus. Lots of orange and grapefruit.

Nice flavor. I pickup mostly grapefruit that balanced by some breads rich malt. Firm bitterness. Not the most complex beer, but well brewed. Mouthfeel is medium bodied and finishes dry with a lingering bitterness.

[Original rating 2015-06-11] Draft at Cotton Exchange in Savannah GA. Clear orange gold with a thin white head. Aroma of pine and citrus. Taste is bitter hops with a strong bitter aftertaste. Bonus: when it started raining and the group I was with decided to leave the waiter let me have a to go cup. Savannah rocks.

Purchased this off the single can/bottle beer rack at Legacy.
Pours with a slight haze in an otherwise clear pour. Amber, copper with a near snow white head that has some very good
retention along with some heavy rings of lace.
AROMA: Pear scents and light pepper along with distant grapefrruit.. There is also some sweet bread malts. NICE!
TASTE: Boy that's good! Great balance, this is an IPA that is right up my ally. Definite but not overpowering hops, great malt balance. Finishes dry.
For me, one of the best IPA'S Ive had.