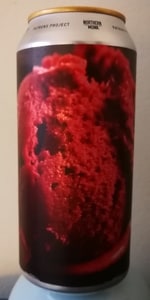 Smell is sweet and tart with notes of raspberries, rosehip, lime and raspberry sorbet.

Taste is sweet and tart again, with the raspberries and sorbet making a return and bringning notes of cherries, raspberry jam, grapefruit and grapefruit rind along. Some bitterness cuts through here and there.

Overall, a very enjoyable "sour IPA". Northern Monk are good at this sub-style.

Raspberry flavors on this are off the hook, incredibly intense and even benefitting from lighter orange and papaya. This may be one of the most fruit forward noses I‘ve ever experienced in a beer, with just a light jammy, sweeter edge to it, adding a pleasant complexity.

Has a lighter body with a lower carbonated, still refreshing and easy drinking mouthfeel.

Tastes just as much of raspberries as the nose indicated, while the jam aspect grows a little more prominent, with just a faint tart peak to it. Orange grows a little more profound, as the malts in this turn a little sweeter, balanced by bitter lime. Finishes with sugared papaya, prickly kiwi and an aqueous note, washing away the bitterness in this.

Yes, this is fruity! Its not much of an ipa to me though, since the beer appears more like a fruited Berliner Weisse. The 7 abv aren‘t mirrored in the flavor‘s complexity though, after its initial fruit burst, the beer doesn‘t have much to offer.