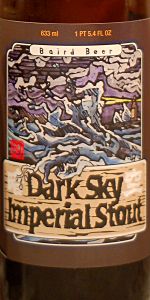 Pours as a bible black libation.
a small but long lived head

The nose gave off hints of coffee and toasted malt.

The flavor is/was a nice round "saftig" melange of toasted malt, hints of coffee, chocolate,
hops and everything else to "round out" an imperial stout.

My criticism is that it doesn't quite have the flavor "Whack" or the "gravitas" of a Russian imperrial-- it's in a way a little "soft" or maybe "pillowy"... yes all the ingredients are there of the Imperial Stout flavor.. even the 9% ABV but somehow the tires aren't fully inflated..

But don't get me wrong-- the strong overwhelming flavor "punch" of an imperial stout has its place. But this beer has its strong points-- it's when I'm not ready to duke it out with an "in your face" beer but I want the heavy stance of an "Imperial"-- here it is..

Then I took a look at where it's from-- and WOW! Usually "American Adjunct alikes" come from this place!

I purchased but one bottle- I'm going back for more...

Pours a pitch black with a dark tan head. Nice carbonation and leaves light lacing. Smells of dark coffee, some earth and bakers chocolate after some searching. Flavor of toasted smoky malts, coffee and some dark fruits. A bit astrigent but still drinkable just not very complex. Solid effort and good but far from spectacular.

A - Pours a dark brown nearing black with tons of carbonation and a great head retention that lingers for some time. Very thick lacing.

M - Very smooth and creamy up front. Slightly bitter with a creamy and moderately dry/chalky finish.

O - Very delicious. It can be almost too bitter and dry on the finish but, it fits this beer style very well. It also seems that this beer is rather inconsistent due to some reviewers opening bottles that are basically flat/sour/oxidized. Suppose I lucked out with this one. Either way, this is my first beer from Baird and I am definitely looking forward to trying more of what they have to offer.

* I think mine was aged because the label was different from the current one.

A: Impenetrable black body with a small beige head.

T: Intense but mild if that's possible. Very chocolatey and not very bitter at all. It's certainly American in character. It's hoppy and fruity with smokey fudge in the aftertaste. Tart as well.

O: By a mile the best beer I've had from Japan. Really lovely. Wish I bought a few.

Fairly aggressively oured from a 12 oz. bottle into an unbranded snifter

A Russian imperial stout brewed in Japan at Baird Brewing Company located near Mt. Fuji. As someone who is very interested in Japanese culture and history and craft beer this brew is of great interest.

Pours an extremely dark motor oil brown capped by a fluffy beige two finger head that slowly reduces to a substantial foam ring. Above average retention, a good amount of splotchy lacing along the glass. Big roasted malt and grain, bakers chocolate, burnt raisins and some espresso notes. Opens with strong dark chocolate, black cherry, roasted barley and grain, dried dark fruit and some port accents. Finishes with abundant bitter hop notes, espresso, and bittersweet cocoa powder and a bit of warming alcohol. Lighter side of full bodied with a fairly high level of carbonation when compared with other Russian Imperial Stouts, smooth and slick. A very solid RIS. A bit lighter bodied than some other brews in the style, but fairly complex and definitely a brew that is worth revisiting. Kampai, indeed!

Tried this again after a few years, and I found it to be really sugary. That's pretty much it. It's a tasty stout, but I look for something more than that in a Russian with 10% ABV.