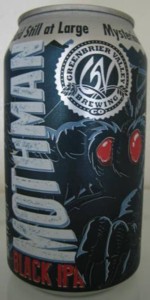 Notes: The Mothman Black IPA is a hop forward, medium bodied black ale. The strong hop flavor is from the use of the choicest Pacific Northwest hops; lending to a balanced bitterness of citrus and hints of floral. The German 2-row and English Crystal malts offer a touch of roasted toffee and chocolate. At 6.7% abv and 71 IBU’s, this Black IPA promises to satisfy any hophead.
View: More Beers | Place Reviews
Recent ratings and reviews. | Log in to view more ratings + sorting options.
Rated: 3.83 by dbrauneis from North Carolina

Reviewed by brewerburgundy from West Virginia

Quite dark brown with very little highlighting. The head is a good sized medium to dark brown.

Hershey’s syrup with hops, but not that sweet. A bushel of pine and earthy hop flavor, some of the best pine hopping I’ve had in awhile.

This style seems to have been a bit of a fad, but I’m still a fan. I especially like piney versions like this.

Reviewed by BJB13 from Maryland

Taste: Chocolate and coffee in the base with a burnt toast character developing; earthy hops, in the middle, with a moderate level of bitterness into the finish

Overall: A bit to charred on the palate but fun to taste a beer in this style - it was a flash in the pan for a while and the style disappeared almost as quickly as it arrived

Thanks, Treyliff, for the opportunity

Smell: It has aromas of toffee, roast, and some earthly elements. There is a bit of an herbal hop note as well.

Taste: There are toffee and caramel malts with a bit of chocolate. There is a bit of earthly elements with some herbal hops.

Overall, a very different black IPA that is more malt balanced, but still firm in hop bitterness and herbal flavors.

Rated by BlackBeardsCup from North Carolina

Rated by ThePold from Virginia

From the CAN: "Mysterious 'Mothman' Said Still at Large"; "Mothman is a legendary moth-like creature reportedly seen in the Point Pleasant area of West Virginia in 1966. After the collapse of the Silver Bridge, Mothman was never seen again. His spirit lives on in this darkly delicious black IPA, with a balanced blend of roasted malts and citrusy hops to enjoy on moonlit nights."; "[Hops:] Amarillo, Chinook [Malts:] American 2-Row, German Munich, German Roasted Barley"; "Pack It In, Pack It Out".

I was beCANming increasingly anxious to Crack! open the vent & get a Gussie Busch Glug started. I am really coming around to his center-of-the-glass & NOT down-the-side style of pour. It acCANplishes the same end result (the creation of loads of head & the release of esters) as an inverted Glug, but without the likelihood of a mess. In this insCANce, it produced a pseudo-cascade that then formed three-plus (!) fingers of foamy, rocky, deep-tan/light-brown head that burbled, Pop!ped & generally fizzed into wisps, leaving a load of lacing in its wake. Color was Black/Opaque (SRM = 44), allowing ZERO light penetration. Nose was very roasty with notes of chocolate, coffee, charcoal smoke & roasted toffee with just a hint of mintiness from the hops. Mouthfeel was medium, par for the course. The taste was also very roasty with an added anise/licorice & treacle bite to acCANpony the aforementioned chocolate, coffee, smoke & toffee, but I was disappointed by the lack of assertiveness on the part of the hops. It is not for me to rate to personal taste & I am glad that they have broken this out into its own deserved style. It has long seemed to me that the roastiness of the malts gets in the way of the precious hops & this was another example. As an American Black Ale, it was decent, but I have had better. Finish was dry & roasty, which was again, par for the course.

3.94/5  rDev +2.1%
look: 4 | smell: 3.75 | taste: 4 | feel: 4 | overall: 4
My first beer from West Virginia. Canned 3/21/2017. Poured into plastic cup. It pours nearly jet black, with abundant cream, beige head and lacing. The smell features roasted malt, dark coffee, and floral hops. The taste is a lovely blend of malt and hops. There is rich roasted malt and coffee up front with bitter, biting hops and a hint of citrus at the finish. This ale is medium-bodied and creamy and is really easy to drink at 6.7% and 71 IBUs. It's an absolutely first rate black IPA. Not quite at the level of Carton's Epitome or Dubhe but right there with the leaders of the style. I'm really glad to have had the chance to try it!
Jul 16, 2017
Rated: 3.68 by dirtyharry2489 from West Virginia