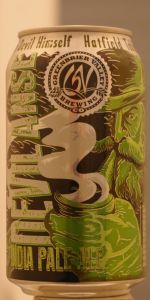 Notes: The Devil Anse IPA is a medium bodied American style India Pale Ale. Featuring a blend of Australian and Pacific Northwest hops; lending to a balanced bitterness of citrus and tropical fruit characteristics. The complex hop flavors are balanced by a blend of malts; including American 2-Row, American Pilsner, and British floor malted barley. At 6.9% abv and 65 IBU’s, no feuding is necessary when you enjoy this refreshingly smooth IPA.

I am quite excited to try this one! It was a recent drop-off from my local, in-person trader, tone77, for inCANlusion in The CANQuest (tm). The graphics on the CAN are spectacular & I am looking forward to its CANtents.

From the CAN: "Hatfield Takes on Devil Himself"; "Devil Anse Hatfield led his family in the notorious and bloody feud with the McCoys during the late 1800s along the Kentucky-West Virginia border. Nicknamed Devil Anse, it was said that he was so strong and fierce he could take on the devil himself. No feuding is necessary when you enjoy the balanced bitterness and tropical fruit characteristics in this satisfying IPA."; "HOPS: Citra, Galaxy, Simcoe MALTS: American 2-Row, American Pilsner, British Crystal Malt".

I CAN't wait to wrestle with the Devil himself in this one! It all began with a vicious Crack! followed by a resounding Glug just to make sure that Devil Anse CANderstood where he stood with me. Namely, back on his heels! He rushed at me with two-plus fingers of dense, foamy, rocky, eggshell-white head with better retention than I was expecting, but I still managed to take him down. Now that I had his attention, it was time to get his full measure before proceeding. Color was an oh-so-slightly-hazy Golden-Amber (SRM = > 5, < 7), which was too bad, since I was hoping to enlist the aid of The Gelt Gang, but they were not showing up. I punched Devil Anse inna nose, then he retaliated & punched me in mine with notes of pine, orange, grapefruit, pineapple, mango, papaya & an earthiness from the malts. Mmm. The blood & the beer were both running freely now! Mouthfeel was medium-to-full, not quite creamy, but big for an AIPA, He let me have it inna mouth, watching as I swallowed in response. I wouldn't give him the satisfaction of knowing just how much I was enjoying this. A previous reviewer mentioned lupulin powder, but I am disinclined to agree. This did not have that chalky graininess that the powder CAN impart. Instead, this was simply a product of its inherent hops, leading to a very pleasant CANbination of PNW bitterness, including pine & grapefruit & Aussie hops to give it a tropical fruitiness, like mango & papaya. I really like these new blended AIPAs & this was no exception. Well, except for the beatdown that we were CANdministering to each other. Finish was semi-dry to dry, but very pleasant & quite refreshing. I told Devil Anse that he is welcome back as long as we CAN come to a truce ahead of time.

Had on tap while visiting WV. While I was not expecting much, this really surprised me. Great juicy hop flavor with a slight bitterness at the end, along with a nice malt backbone which balances well with the hop flavors. Very good!

This is an exceptional beer brewed in the little ol Greenbrier Valley in the Blue Ridge Mountains. I've had it a few times on draft in the past few years but this last time I really got a NE haze with exceptional citrus/hop-forward taste. Very impressed!!

Not much to look when it was set in front of me pale golden yellow almost like a macro lager. I wasn’t expecting much but I was wrong. A really good IPA outside of the citrus realm. Hoppy, earthy and a really good crisp clean finish. Great beer.

A bushy, white, one inch foam slowly morphs to a creamy veil. A dense coating of lace is deposited on a PBGC pint glass wrapped in threads of glass. The beer is opalescent, orange-gold (SRM4-6). Tiny bubbles are everywhere, all racing to the top.

This IPA is more bitter than I had expected, which may be in part due to the number of NEIPAs I have enjoyed lately. Orange flavors work well with the pineapple. Grapefruit and pine are also evident, though all rather pithy. Some cracker malt is also present just before a long, drawn-out finish that returns bitterness to the forefront.

The body is full, with a density similar to pear nectar. It is almost dense. The texture is soft and fluffy, perhaps due to the background of fine carbonation. Alcohol is noticeable, yet well-controlled -- about as expected.

This is a good American IPA and well-suited for relaxing with or without casual conversation. I enjoyed this one on a bitter cold and snowy night after a long drive home.

JediMasterLenin from District of Columbia

12oz can into a Teku