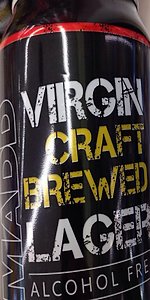 Tasted at the Toronto Craft Beer Festival. I want to be kind but their product faced some pretty stiff competition. Might pass as an alternative to American adjunct based lager.

This is the best tasting non-alcoholic beer I've had. I'm not sure why the reviews are so bad for it.
It actually tastes like beer unlike most of the other ones.
Doesn't leave that bitter taste in your mouth, nor is rather strong.
Doesn't taste like water like Budweiser. I highly recommend it.

Horrible, zero head, stale cardboard malty taste. A few sips and I had to pour the rest out.

Drank from a 16 fl oz can purchased at Walgreens, Allston, MA
Served in a pint glass

As expected, the aroma was very strange. Initially, I picked up unusual spice notes. Soon, the spices disappeared and subtle, sweet malts came forth. Think faint grape nuts or cereal grains or, in brewers' terms, unfermented wort. Not great but not terrible either. As the beer warmed, the malts came out a bit more. An off-putting, solvent-like note appeared later in the session.

The flavor profile was literally the most watery and flavorless I have ever encountered in a beer (if you can call this a beer). Very subtle cereal grains. Faint unfermented wort was also detectible. The finish was nonexistent. "Clean" would be an understatement. The only reason I scored this a 1.5 versus a 1 was because the beer did not actually taste "bad." Instead, it practically lacked any taste at all.

Super light and spritzy mouthfeel. Severely overcarbonated. Quite airy on the palate. This beer was obviously was force carbonated, and done so rather poorly.

"Beer flavored seltzer water" is definitely the best way to describe MADD Virgin Lager. I took advantage of the fact that these tall boys were on clearance at my local Walgreens for $.99 each. As bad as this beer may be, it was worth trying for the experience.

Appearance: Its head starts off nice and thick, but vanishes with hardly a trace within a minute or so. The fluid remaining behind is straw-colored and not very bubbly.

Mouthfeel: It's barely thicker than water; once the carbonation vanishes -- also within a couple of minutes.

Taste: I imagine water that has been passed through loaves of Hawaiian bread, then given a second run through masses of moss fresh off the forest floor. It doesn't taste remotely like beer to me. Worse yet, the vile, smoky aftertaste lingers far longer than I would ever want it to.

Overall: Calling this "craft"anything is a travesty. Aside from the infamous Earthquake, MADD Virgin is easily the worst beer-like thing that's ever crossed my taste buds.

Overall the best non alcoholic beer ive had so far, it resembles miller/bud light with something not quite all there (bite, alcohol, hearthyness) not the worst choice but for what reason would you buy this? It's a decent substitute i suppose if you need that sort of thing.

Pours a clear pale yellow, left a fizzy white head that stuck around for a good amount of time.

Smells slightly skunky with a hint of barley.

Taste isn't all that bad, doesn't stand out, doesn't do anything bad, but I would consider it like a bud light without alcohol.

Very light bodied, crisp, drinkable. Fairly high carbonation. The taste is lacking something, and I can only attribute the lack to no alcohol.

Certainly is a lot better than O'douls, but now that I say that I'm going to have to retry some out of curiosity and see if my tastes have changed.

Appearance is better than expected--poured into a Perfect Pint, the color is justa tad lighter than the averagelager, but with a slighlty greenish tint. Head was bright white and four fingers, but vanished quickly.

The smell is just awful--uric acid plus an odor almost like car exhaust.

Taste is very light, with a touch of sweetness and a hint of bread and lemon. Not much like a lager, really, but more similar to a shandy.

Feel is very light...a very light body beverage that would be drinkable if it weren't for the excessive carbonation.

Overall, one of the better NA beers that I've had, but hard to call it "good"--I suspect that the people that this was test marketed on were predominantly women that hadn't had much experience with beers, but more with shandys, champagnes, and wine coolers, as this beverage is more similar to those beverages than lager...still, not a drain pour.

Mine was from a can. Head was nonexistent after two minutes and it smelled of tuna. Taste was so forgettabe I'm not sure if I was drinking "beer" or carbonated water

Politics of MADD aside (of which I don't agree), I decided to give it a spin (pun intended). Granted, NA's are just a different type of beverage really, they don't ever taste quite like beer, let alone "craft" beer. This one is crafted to taste like real macro swill, which it does. About as good as O'Douls but with a few surprises. Starts out with a sudsy head that dies out completely after a minute or so. Very pale straw color, brilliant clarity and active carbonation. Aroma is weak and grainy, no real discernable beer characteristics other than a weak wet cracker smell with burnt hair and metal. Flavor is surprisingly decent, with a very weak but good taste of malt and grassy hops. Finish is wheaty and herbal. Mouthfeel is about like other light lagers. Overall not bad for what it is.

16 ounce can bought at Walgreens, the exclusive US Distributor. I bought this because it alleges it's the world's first craft brewed non-alcoholic lager on the market, and I'm on a N/A beer kick right now. And yes, MADD = Mothers Against Drunk Drivers. I recall kicking back with friends and drinking Kaliber in high school before I could drink real beer and enjoying it (it's still my near beer of choice...I like it for what it is), and I've tried all the near beers I can find in the middle of the US (I wish I could find any of the German low alcohol heffeweisens on the market, but they don't get them in this part of the country).

A - Macro brew lite beer look, but with only about 2 seconds of one finger head that immediately disappeared into no head. This is one pale beer.

T - Tastes just like it smells. Honestly, it tasted like corn juice. Not that I've had corn juice, but it's what I'd imagine non-alcoholic beer made solely of corn would taste like. I can't find any hops taste, and no malt taste, either.

Wow...I'm not sure if I've ever had a less beer-like near beer, ever. Reading some articles online about the college that created this recipe, it appears the beer is never fermented...and it shows. It's not that alcohol was removed from this "beer", but rather no alcohol was created in the brewing process and later removed like in most near beers.

MADD Virgin Lager from MADD Virgin Drinks
Beer rating: 64 out of 100 with 16 ratings