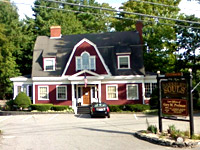 4.57/5  rDev +2.5%
vibe: 4.5 | quality: 4.5 | service: 5 | selection: 4.25
We stop in to this interesting, quirky spot every chance we get. They always have a wide array of what they do available on tap - and what they do isn't for everyone. This is not your typical ten IPA house - they feature what they do well. Big, boozy, barrel-aged beers. They have recently added some good fruited beers to the lineup and some of them are very nicely done, some are take it or leave it. No truly traditional styles, this place marches to their own beat. So if IPAs and traditional beers are your jam, this is a place you can skip. Otherwise, keep an open mind and don't miss it.

Somehow it reminds me of a speakeasy - low ceilings, on the dark side, underground. I half expect someone to ask for a password at the door (and ironically it is under a lawyer's office...) and a jazz trio playing fronted by a sultry singer. There is outside seating available when the weather suits. The only thing is - it is a cave and it's loud and echoes a lot, but it usually is not packed full of people so it evens out a bit. I've seen dogs there outside where there is a seating area (unheated) and some open space behind the parking area that is pretty much the property yard. I have seen a few kids playing with the games but I would not really call this a kid-friendly environment (plus it is an easy place to overindulge pretty quickly given the ABV of many of their offerings). Outside you could probably make it work. But for the grown ups, it's a pretty cool vibe overall.

We've had some tremendous beers there, and a couple that have not lived up to that lofty pre-expectation. They have a sweet spot where they shine and some (not all) of the excursions into other areas just aren't as dialed in. What we have consistently experienced is excellent and knowledgeable service even when relatively busy - the tap list can be daunting and for us the available guidance is welcome. Also, the people have gone out of their way to find bottles (more recently cans) for us when we've done the to go thing. They do distribute some - we've found the fruited items fairly easily while in Maine and as far south as our Southeastern MA homeland on occasion.

I'd call this a must stop if you are looking for something slightly different than the typical.

4.63/5  rDev +3.8%
vibe: 5 | quality: 4.5 | service: 4.75 | selection: 4.5
Barreled Souls has perhaps the most character of any brewery I've ever visited. It sits in the basement of a large old home (the 1st floor of which is a law office). Barrels are absolutely everywhere, both inside and out. You might say it's a theme. Lots of bars and breweries decorate their walls with used beer bottles and cans, but Barreled Souls has one of the largest - and geekiest - collections I've ever seen.

Seating is limited inside, with room for perhaps a couple dozen, with no real at-the-bar seating. There is very limited outdoor seating, but I didn't notice any heat, so that's not going to be super helpful half of the year in Maine. A handful of table games and some cards are there to keep you busy, if that's your thing.

The only detraction is the noise: between the size and the material, sound carries throughout. If you're the quiet type (we are), I recommend headphones if you want to drink in peace. Nevertheless, the overall charm of the place more than compensated for the noisy interior.

What about the beer? Glad you asked!

When Barreled Souls opened, their shtick was that all of their beer would be barrel aged - of a sorts. Their website still claims that all of their beer undergoes primary fermentation in oak barrels (a la Burton Union). If this is still accurate, that would include their range of hazy IPAs and candy sours. I'm not sure if I taste that coming through as much as I would in, say, an English or EC IPA, or a lager (or, for that matter, if it's still true). They do age a number of their big beers in a variety of spirits, though, so many of their beers certainly spend significant time in oak, regardless.

Wait, that was less about beer, and more about the brewery again. Back on track.

Barreled Souls is best known for their spirits barrel-aged stouts and barleywines, often with various additives such as vanilla, chocolate, and marshmallow. They're know for them for a reason: they're unbelievably good. I would put them up there with Angry Chair and Bottle Logic in the pastry stout game.

They do a variety of candy-inspired (and candy-added) sours, as well. Whether or not that's your thing is a matter of personal preference, but what I can say is: they embody truth in advertising. Their Skittles beer smells and tastes like a handful of Skittles.

Finally, they have a small output of hazy IPAs of varying quality. I can't say that I've been particularly impressed by those so far.

That's what really drives the Quality and Selection ratings down (to a still sky-high 4.5). No lagers, no traditional beers at all really, very few non-gimmicky/non-fruited sours, not much in the way of an IPA lineup. If you're picking up some Barreled Souls (or headed to the brewery itself), you're really in the market for either their huge stouts/barleywines, or their fruited candy sours. This is not a destination where everyone can find a beer they like; you need to make sure the menu fits your palate first.

On the plus side, despite the limited variety of styles, within those styles they offer quite a bit on tap - nearly two dozen. As an example of what I am talking about with the limited selection, as of this writing, 16 of their 20 taps are for stouts, barleywines, or fruited sours (even their Leipziger Gose has lemon zest and is called a fruited sour on their own website).

Overall, this is a brewery that does what they do better than just about anyone else in the country. Moreover, it's a destination oozing with charm. This is a must-visit if you're in South Maine - unless you only like lagers and IPAs.

4.47/5  rDev +0.2%
vibe: 4.25 | quality: 4.5 | service: 4.5 | selection: 4.5
Interesting basement brewery tucked away in the backyard. Entry through what was mostly likely the garage, timber framed, like being in a old wine cellar. Small bar around to the right and some barrel chairs about the room. Also had backyard set up with barrel chairs and table, nice on a warm day. About 20 beers on tap, I had the Continuum which was excellent.
Jun 06, 2021
Rated: 4.58 by Griffith from Connecticut

4.55/5  rDev +2%
vibe: 5 | quality: 4.25 | service: 4.5 | selection: 4.75
Low lighting, low ceilings, lots of wood--slatted and ditressed--and walls lined with hundreds of bottles. Seats made of whiskey barrels, a shuffleboard table, and an inconspicuous bar in the darkest corner of the space. A cozy, intimate cave of timeless Western appeal. The space is quite beautiful

I have never seen a brewery with so many draft selections, BS seems to do a bunch of different BA beers with different treatments and it makes for ridiculous draft variety

Side note: it never seems packed, but it would lose much of its charm if it were

Inside it is clean, lots of seating made out of barrels, rustic, small bar with stools.

Lots of swag, growlers and they had bottles available to go when I was there. The bottles were hand numbered.

Reviewed by smanson56 from New Hampshire

Reviewed by GDrew93 from Maine

5/5  rDev +12.1%
vibe: 5 | quality: 5 | service: 5 | selection: 5
This barrel themed brewery is absolutely top notch. All beer is fermented in oak barrels!! Most of which is then aged in bourbon (or other spirits) barrels. It has a speakeasy basement vibe. And the service from the bartenders is second to none. Bring your own food and play some games (corn hole, shuffle board, cribbage etc) and drink the best beer Maine has to offer here!
Feb 07, 2017

Reviewed by Newbeergeek1 from Maine

4.56/5  rDev +2.2%
vibe: 4.5 | quality: 4.25 | service: 5 | selection: 4.5
Just a really really funky and fun place to go. You have outside or inside the "dungeon" to taste your brews. Fun beer list and one of the owners told me that they like variety and brew accordingly. some of their standbys are on tap more often. My beer trail was rewarded with a really enjoyable place to try brews.
Jan 24, 2017
Rated: 4.54 by coombski from Maine

Rated by NYR-Zuuuuc from Connecticut

Reviewed by Mpsmooth31 from Massachusetts

Reviewed by SomethingClever from Ohio

4.59/5  rDev +2.9%
vibe: 5 | quality: 3.75 | service: 5 | selection: 5
I love this tap room! Barrels everywhere from the fermentation to the chairs to the tables. Everything is made of barrels. Has a very old world vibe and very nice. Located in the basement of a house which I believe is an attorney's office. They always have great music playing, think Neil Young. Service is always great and they always have a varied selection of beers from IPAs, Pales, Stouts Scotch Ales, Wheats, Barelywines, Gose and usually something bourbon barrel aged. I just wish I liked the beers they made a little better their stouts are so far my favorites.
Sep 09, 2015
Barreled Souls Brewing Company in Saco, ME
Brewery rating: 4.14 out of 5 with 1104 ratings