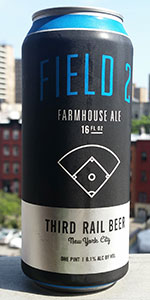 Another mysterious entry from my backlog that surfaced while vetting everything for approved pictures. CANQuest (tm) policy states that NO CAN will be Crack!ed & Glugged until an approved pic is in place. I CANnot fathom where this one might have come from. Hmm.

From the CAN: " Field 2 is a complex and refreshing farmhouse ale that emphasizes the unique flavors of rustic Belgian yeast. With delicate notes of wild herbs, spices, pear, and straw, it’s no surprise that farmhouse ales once quenched the thirst of field workers. The name comes from our preferred softball field on the Great Lawn of Central Park."

I performed some light, in-CAN agitation before Crack!ing this one open, ensuring that any flocculate that may have settled would now be back in suspension. My efforts paid off, although I did get some initial foaming through the vent following the Crack! A Gussie Busch Glug produced two-plus fingers of dense, foamy, rocky, French Vanilla-colored head with very good retention, leaving nice lacing in its wake. Color was a deeply-hazy/lightly-cloudy Yellow-Gold (SRM = 4 - 5). Nose had a tart, lemony farmhouse funkiness, kind of cheesy, making me wish that I had some cheese & crackers as an acCANpaniment. Mouthfeel was medium-to-full, not quite creamy. I will be honest and say that Saisons are generally not my go-to style, but I also like to keep my hand in. I was a little hesitant based on the nose, but the taste was nowhere near as funky as the nose had led me to expect. Instead, it was highly approachable with a light lemony tartness and a cheesy tang, but not so pronounced as to be offputting. The malt gave it a light breadiness, almost crackery, making me again wistful for a cheese & cracker plate. Finish was dry but not gasping like some that I have had in the style. I CAN see where this could be CANsidered refreshing. It was a very nice interlude.

Pours deeply yellow with just enough haze to capture the light and keep it inside the beer to glow sweetly. Just two fingers of somewhat soapy foam that fell quickly but not completely. Nose is lemon and herbs. A bit of sweet sugar and spice. Hop pepper and some sweaty funk. It's earthy and it even smells a bit sour. Taste is excellent. Perfect balance shows me sweet green herbs, pepper and spice. Lemon and a bit of juicy orange. Malt is crackery and firm. Finishes with a softer than champagne style bubble and a bit of sweetness. Bitterness tries to chase it away but it can't quite.

Poured from a can a hazy golden straw color with two fingers worth of bubbly head. The belgian yeast comes through in the nose with a bubble gum smell thats layered lightly with pepper and lemon. The flavor follows the nose almost exactly. The feel is a little creamy and has lively carbonation. Overall this is a great representation of the style. Easily could drink a few of these.

Decent saison, nothing amazing, some more spicy/yeasty qualities..again I get lime, some light pepper, ginger.

Kinda fizzy, which makes sense for the style, bit is not too pleasing here

Meh, nothing special...one and done here for me

a 6.1 % saison...lovely....and it wasn;'t just the ABV I loved. Good look, feel and texture. Crisp and a little heavier which was different. would drink again. Great beer coming from NYC.

S: Lovely spicy character. White pepper and dried banana slices, with a little bit of orange. A decent amount of honey-like malt rounds our the aroma.

T: Very classic saison flavor profile. Peppery and semi-dry, with appropriate grassy/earthy hop bitterness and less malt than in the aroma. Fairly yeasty but in a clean sort of way. A little bit of citrus zest melds with a straw-like wheat character to make this a very traditional and enjoyable farmhouse ale.

Thoughts: Probably the best saison I’ve come across in a can. This is a very well-crafted and highly drinkable traditional farmhouse ale. Highly recommended.

Still at the office so this 16 oz. can is being poured into a tumbler...

A - A hazy orange with a bright white head. Looks like that's dissipating, but it is being reinforced. Meh.

N - Smells like a classic saison. I get wheat, some barnyard funk, more wheat. Nice.

M - Frothy everywhere. Immediately becomes foamy in my mouth, which is delighful. Tons of effervescence. Dry on the finish.

O - A nice offering from our friends at Third Rail. Cheers!

Got this as an extra - it's always nice to have a Farmhouse Ale in a can. Smells and tastes a lot like a Belgian, but fades a bit at the end - still a very good beer through and through.

This is a fantastic non-Brett, non-sour saison. No frills, this is just the real deal, bright, yeasty, dry, not thin. One of the best 'regular' saisons that i've ever had- seriously recommend seeking this out if you're in the NYC area.

A: The beer is hazy pale yellow in color. It poured with lacy wisps of bubbles on the surface and a collar around the edge of the glass; the bubbles on the surface eventually faded away and only left a thin collar around the edge.
S: Light to moderate aromas of Belgian and spicy yeasts are present in the nose.
T: Similar to the smell, the taste has lots of flavors of spicy and Belgian yeasts from start through finish.
M: It feels light- to medium-bodied on the palate and has a moderate amount of carbonation.
O: This beer is a good representation of the style. It's all about the yeast, but still is complex since there are both yeasty and spicy flavors.

The beer comes in a yellow orange color. A bit more orange than some familiar saisons.

The beer offers a light sweetness up front along with a breadiness in the middle. Then the beer continues with lots of herbal and spicy flavors. A linger bitterness of grass and lemon seeds.

As the beer warms up, stone fruits come through. A medium minus refreshing mouthfeel.

Comparable to Tank 7 and a fantastic saison.

Fantastic saison even for those who do not typically like this style. Smooth and easy drinking without any of the funkiness that can sometimes come with saisons. You can get cans of this at Citi Field now!

Technically one of the best-made saisons I've ever had. Nothing too fancy here, but the perfect amount of citrusy zest brought to life by a lovely Belgian yeast strain.

The drinkability of this saison is amazing, and at 6.1% it still packs a punch. Crisp, refreshing, and delicious, I'm excited by the fact that they put out cans because it means I can enjoy these out at the beach as well as the bar.

I know 5 seems high but the drinkability of this beer is absolutely out of control. It's incredible refreshing, as per usual for a FA/Saison and it also carries extremely well in cans, which were new to Third Rail's distro as of a few months ago I believe. This is not a beer for hop heads but something delicious in a snap and really brings out the yeast strains to succeed here. Light in body with a yellowish-orange hue...absolutely love it. Bravo TRB!

Overall I really like this one; even moreso than the Bodega Pale Ale. I found this one easier to drink. Very juicy and fruity, with no real spice or no pepper at all, which I like a lot. I thought this was very good and makes me excited for more of their beers. If you like your saisons on the fruity side rather than the spice and pepper side, I would recommend checking this one out.

Field 2 Farmhouse Ale from Third Rail Beer
Beer rating: 89 out of 100 with 72 ratings