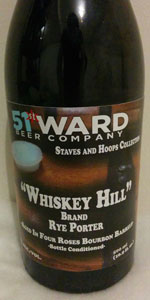 Reviewed by mfnmbvp from Illinois

A - As others have noted, the beer pours flat with no conjuration of any head whatsoever, merely the occasional bubble. The body is a few shades away from opaque with some cola brown showing near the edges. Looks like a weak attempt at a stout. Doesn't look bad per se, but points taken off for lack of a head and carbonation.

S - Aroma is alright, but fairly weak and doesn't stick around long. Mild notes of chocolate, char, alcohol fumes, maybe some dark cherry juice? Only very mild 'barrel' presence in the form of wood, and a vague hint of whiskey. Not foul or offensive, but definitely not what was intended I'm sure.

M - The mouthfeel is the worst part of the beer, and gives it it's worst points. A virtual lack of carbonation kills this beer. Aside from that, the body is smooth & creamy. Easy-drinking with a bit of booze heat on the finish. Dark chocolate & char.

Overall, better luck next time 51st Ward, I will be hesitant to try future barrel-aged offerings in the future from these guys.

3.03/5  rDev -13.7%
look: 3.5 | smell: 3.5 | taste: 3 | feel: 2.25 | overall: 2.75
Extremely low carbonation, producing a flat, nearly-black pour with the faintest rim of foam around the edge of the glass. This also hinders the aromas wafted to your nose, which end up being an odd (but pleasant) mix of dark chocolate, saltwater taffy, meringue, and sugar wafers; underneath this is a bit of woody oak from the barrel, but there's more in the way of cardboard. Discouraging.

Undaunted, I pressed on and opened my mouth, which was something of a mistake. On the tongue, I got a mess of a watered-down chocolate martini, with olive notes and the infuriating regret you get when asking for a bourbon with a splash of water which is delivered as a water with a splash of bourbon. Intentionally under-carbonated beers rely on abnormally-high ABV to prop up the mouthfeel, but this is simply a diluted mess. The feel is comparable to what would happen if you put half a shot of whiskey in a glass of 2% chocolate milk; it's a tragic misuse of every element involved in its construction.

Reviewed by bcm75 from Illinois