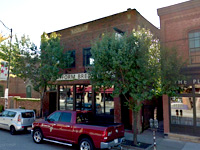 Platform gets dumped on by a few Cleveland area BAs but I like it fine. The Brewpub is a nice friendly place with reasonable bar food available (I was most recently there for brunch and it was fine without having a full kitchen set up). There's always a good selection of beer and ales although they make the mistake of serving their stouts too chilled.

This place is much smaller than one would imagine, considering their formidable presence on the packaged beer market. This serves primarily as a taproom and local hang out, as opposed to the major operation I'm sure their larger production facility is.

Tanks and brewing equipment stand behind the full length of the moderate sized bar, which has a glossy wooden top and an arm rest unlike any I've ever seen--it's huge and thick, kind of obtrusively so. A sweaty, sticky brick supported woody environment with no air conditioning fully opens up to a flowery outdoor patio, where, outside and in, communal seating is the name of the game.

The taplist is quite long, consisting in large part of their own brews, and only a select few guest taps. They are primarily focusing on variations on the IPA and the kettle sour, to the point where they have 3-4 sections to parse out their own sub-styles of IPA, and a few sections to differentiate their various takes on sours as well. Oddly enough, I found the lager they offered to be the among the best tastes I had during my visit.

They host a food vendor on site that has a limited menu if you are craving something immediate. There are a few games to be played as well, if conversation is dying and the TVs aren't functioning (which they actually weren't during my visit). Otherwise, it has a cozy, almost dive-bar sort of vibe, happily hosting both the cosplay geeks and business folks of the area.

Great drinking area with plenty of space and beer options on tap. All beers by Platform are extremely well priced and affordable, with several notable beers from other brewers available too. Definite place to revisit and spend some serious time in. Food was available through some kind of outside vendor I believe; limited options, but reasonably priced and tasty.

Good atmosphere. A dozen or so of their own brews plus half a dozen guest beers. Good selection. Had six Platform beers, decent, but nothing exceptional. Food options available.

LOVE Platform! The ambiance, beer selection and staff are all top notch. Beer quality is very good. Even though it is just outside of Ohio City (and maybe a mile or so from Great Lakes, Market Garden, Nano Brew and more), it never seems as hectic or busy where they are located which I really appreciate.

They also have food vendors come in on different days, offering up some great food for cheap prices.

Platform has become a regular stop for me. It is for sure in my top 3 in Cleveland along with Fatheads and Brew Kettle.

Excellent venue in the Cleveland area. They brew exceptional beers and have a scintillating guest tap list. While there is no kitchen at Platform, they do have snacks on hand and regular appearances from food trucks and local vendors. Great people and great beer!

This is a fairly new brewery on Cleveland's near west side that opened up about 4 months ago. They have 24 taps, 8 of which are of their own offerings, and 16 of which are offerings from other craft breweries. All craft beer here of course, no BMC macro junk anywhere in sight. This brewery seems to be very adventurous in terms of what they brew and no style seems to be off limits for them, and that is a great thing! When I first visited this place about 3 months ago I was quite impressed with the quality of their offerings, as the quality was certainly higher than what I expected I would get from such a new operation. But being that their head brewer used to work at Fathead's, I suppose the high quality of their product should come as a surprise to no one. Their prices are pretty standard for Cleveland bars/breweries. Good vibe and atmosphere, although I am not a fan of the flat screen TVs showing sports. I am not a sports fan in general though. The bar is nice and long and seats about 40 people and there is also a mix of round tables higher off the ground that can comfortably sit 4 or 5 people and in the front there are some long picnic style tabes with benches. Food wise this place has a different local restraunt or food truck offer some menu options. This place is just a a stone's throw west and down the street from the busy Lorain Avenue/West 25th Street district. Not that I don't enjoy the 3 awesome breweries and many good beer bars there, but if you are looking for something a little bit quiet and off the beaten path that also has great beer and good vibes then this place is well worth checking out.

Stopped in around 6 on a drizzly Tuesday evening in mid October. Wonderfully reclaimed space in chic Ohio City area of downtown.

Four house beers on tap (with immediate plans to expand brewing capacity): Belgian Blonde, New Albion Pale Ale, IPA, and Imperial Stout. New Albion pale is the recipe from the original craft beer from NoCal Jack McAuliffe. His daughter lives near the brewery and worked with them on this project. I was told Jack came to the tapping and seemed to really, really like the beer.

All house beers were wonderful. Wish they had more which is in the works. Moved to the world-class guest taps and wound up overdoing it with three flights. Evil Twin BerlinerWeiss, Mikkeller Spontanframboos, Liefman's Cuvee-Brut, Verdett Extra White, Founders Dark Penance and Breakfast Stout.

Female bartender very knowledgeable about the Cleveland beer scene as she runs a beer tour company.

A great place and look forward to returning when more house beers are online.