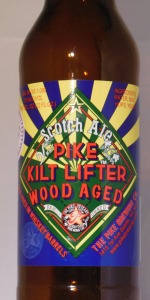 4/5  rDev -0.5%
look: 4 | smell: 4 | taste: 4 | feel: 4 | overall: 4
Sampling a cellar temp 12 oz can date stamped 12/03/2019. My can says 12% , not the 8.5% listed on the site page.
the beer pours a clear mahogany color with minimal beige head foaming up and fading to a sturdy edge lacing and one large island of bubbles in the center of the glass. the edge layer sticks around during the sampling. Leaves some spotty lacing when I take a sip.
The aroma is caramel, brown sugar, fig and some booze, I also get a little bit of a whiskey note. No real hop character to speak of.
First sip reveals a medium body with slightly sticky texture and fine prickly carbonation. This beer feels big and the carbonation makes it a sipper as it is fairly sharp on my palate.
Flavor is brown sugar, caramel, whiskey and a little dark fruit (figs and red grape). I definitely get some bitey booze on the finish, but not warming or heat. I also not surprisingly dont get any hop character on this flavor profile. There is a bit of a drying wooden or popsicle stick note that comes through on the finish.
Overall this is a pretty solid scotch ale that packs a pretty good punch for ABV and is a bit of a sipper all around. Glad to have tried this one.

Has plenty of sweet malt and barrel oak with toffee and light dark fruit. It also has a viscous, almost medium mouthfeel. Overall a very nice scotch ale.

Although, at the brewery, it was billed as a British Barely Wine. And listed at 12%. Hmm...

The aroma is sweet and the hops are medium-intensity. It's not nearly as sharp or boozy as the 12% ABV inidcates. There's some light nodes of maple in there, as well, along with strong cereal grain.

Tastes surprisingly good. Cereal grain up front--sweet but not too sweet--with medium strength English hops and some light booze balancing the the back end, which also contains some nice wisps of vanilla, caramel, and whiskey.

Almost no head; almost no lace.

Caramel & bourbon notes in the nose.

A simple booze-bomb; I prefer more complexity in a beer like this.

Rated by Oh_Dark_Star from Washington

Reviewed by draheim from Washington

Pours a clear light ruby-brown with a smallish head. Smell is a little vanilla and wood, sweet, malty, toffee.

Taste is sweet, light bourbon, plenty of oak, some vanilla.

Mouthfeel is smooth and light. Overall -- I swear I tried this before, and wasn't very impressed. But, this is quite tasty, although a bit sweet.

3.59/5  rDev -10.7%
look: 3.75 | smell: 4 | taste: 3.5 | feel: 3 | overall: 3.5
The aroma is an interesting mix of the peaty smoked malt and booze. Some fizz in the mouth but rather oily and the mouthfeel flattens out as the alcohol rises. Hot and woody flavors with burnt sugar and caramel. Kind of a dishwatery aftertaste with some bitter hops. Even slightly sourish for the finish. From the 22 oz bottle purchased at Railroad Market in Burlington.
Sep 13, 2015
Rated: 4.25 by powdersoldier from Washington

Rated by Braz from Washington

Reviewed by mabermud from Washington

4.12/5  rDev +2.5%
look: 4.25 | smell: 4 | taste: 4.25 | feel: 4 | overall: 4
Look: Muted brown body. Thin, slick, off-white head.
Smell: Sour whiskey barrel.
Taste: Balanced whiskey barrel and scotch ale. Nice sour whiskey with scotch ale.
Feel: Nice. Low carbonation with a semi-medium body.
Overall: I like it, and I am impressed. I have never really enjoyed any of Pike's beers. This one is an exception. I'm going to go buy and age another bottle.

Very well put, sir. Pike has done a fine job of balancing the whisky aromas and flavors with the Scotch ale itself. Neither overwhelms the other. This is a lovely sipper, a little more subtle than a lot of barrel aged beers, which in this case is all to the good.

And at $10 a bomber, it's a pretty decent bargain for a beer of this quality.

I'm drinking from a 2019 bottle. It's now 12.8 %, way up from when this beer was first listed. Pike says the beer was aged 3 months in "whiskey and bourbon barrels". So the beer no longer has the distinct Scotch whiskey character that it had several years ago. But it's still excellent stuff. The barrel aging gives a blended effect, not exactly whiskey, not exactly bourbon, but some of each, and some wood. Those flavors blend well with the Kilt Lifter beer, with the caramel character of a Scotch Ale. It's a little sweet for my tastes, but it's just right for the Scotch Ale. Think a boozy Tootsie Roll.

4.21/5  rDev +4.7%
look: 4 | smell: 4.25 | taste: 4.25 | feel: 4 | overall: 4.25
Pours a dark, hazy orange brown with a half finger light khaki head with good retention and light lacing. Aroma of whiskey, dark caramel malt, brown sugar and a hint of peat. Flavor is rich whiskey soaked dark dried fruit and brown sugar, light oak and peat, Finishes a bit peaty, semi-sweet and whiskey infused. Medium bodied with great carbonation. This puts the Scotch back into Scotch ale, a nice balance of whiskey and classic Scotch ale flavors. Really nicely flavored and drinks like a much bigger ale. I could hardly stop drinking this and had to pace myself. I hope I can find another bottle. Pike is killing it with their aged ales these days.
Oct 21, 2014
Wood Aged Kilt Lifter from Pike Brewing Company
Beer rating: 89 out of 100 with 33 ratings