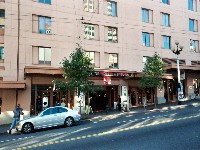 Walked here from my downtown hotel. Cool vibe but a little cramped at the bar. Nice selection of their regular lineup and some seasonals. Good quality brews with a helpful, friendly bartender.

A fun brewpub in a great location just blocks from the Pike Place Market. Had the 6 beer sampler when I visited in 2009 and it came with a sheet explaining what each beer was. All of the beers in the sampler were good, and the nachos were really good too (and happy hour meant 2-for-1 appetizers). The pub also has a cool beer memorabilia museum area with a lot of interesting pieces, as well as a decent selection of merchandise for sale.

Large brewpub located right in the middle of the large public market in downtown Seattle. Great selection of easy drinking beers of every style. Great staff who are very knowledgeable. Food is great and prices are more than fair. Décor is eclectic and worth a detour.

what a bizarre place this is, inside some sort of mall or something it seems, right off the pike market and sort of below it, and also a veritable museum of the history of beer, many rooms at different levels in here, steps and ramps to here and there, things like old orval posters and images from the early days of american craft and weird coasters adorn every inch of it, and there are multiple bars in here. i found one, either down or up some stairs, all of a sudden i was in a different world, like the basement of a nascar fan, but for beer. put together in a low brow, almost hick or redneck way, but just because its been there awhile, like in a good way and all. they had a nice selection of beers on, and since most of them were new to me, it seemed like a lot, although i know they have some standard every day flavors working. i had time for two, a reasonable but over fruited lemon wheat, and a really astringent and lackluster fermented too warm maybe golden ale called nellie that wasnt even really all that golden. the place is like instant entertainment, the beer is almost secondary, which for me worked in their favor. i sat on some weird black leather diner or club booth and looked around while a choked down mediocre at best ale. the beer seemed super dated, but the service was friendly and the place is truly one of a kind. maybe i ordered wrong, but the beer did basically nothing for me. still, the place is a bit of a spectacle, well worth a stumble though when you are in the area. ill order differently next time for sure...

Stopped in here while going through the Market. The Monk's Uncle was pretty tasty, and my buddy was drinking the Pike XXXXX Stout which he enjoyed quite a bit. The beer paraphernalia all over was really cool and they have some neat historic things hanging all over. The best part though was the seafood dip with pita bread. It was great!

Visited here with Da Boss on 5-24-19 as part of our first night here in DTSEA.

Vibe was awesome, a Breweriana wet dream come true. This place is a living museum to beer stuff. I would suspect that Mr. Finkel's access thru his import business is the main contributor to this collection. The seating is odd, random, isolated, very well though out for privacy.

Quality of the beer was solid as i enjoyed the 5X Stout and Da Boss enjoyed the Kilt Lifter.

Service was good as Jesus was very timely throughout our dining experience. He complimented my choice of the Stout as being a good choice.

Food was solid as i enjoyed perhaps the best Rueben i have ever had and Da Boss had the Mac n Cheese with Crab which she thouroughly enjoyed.

Overall a pleasurable dining experience with some good beer. Surprised the PNW Forum boys do not include this on their list of places to visit.

Went for lunch and it was fairly packed with a mix of tourists and locals. Pub looks nice all decorated in red and black with plenty of vintage beer memorabilia throughout. It is mix between chain restaurant and vintage eclectic bar. They had about ten of their beers on tap and a lot of the offerings I could get in bottles back east. I had a pint of the stout and blonde ale. Both were way better than I remember. For lunch I had the spicy wild salmon. Delicious combination of flavor although a bit on the heavy side. Overall, this was a good experience and a place that I would revisit if I was in town.

Daniellobo from District of Columbia, May 06, 2017

This seemed like the one place to try in Seattle's downtown. I found it catered more to the touristy crowd. Their stout was good. most of the beers were meh.