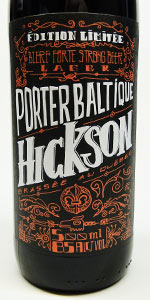 A Baltic Porter lager ale 8,5 % abv poured from a 500 ml glass bottle .
I just thought this was a great version of the style of beer. Nice and warming and perfect for a Quebec winter evening.
Well balanced, not overly sweet, the overall flavors get interesting as the beer warms up. I am becoming a fan of this brewery.

Taste- starts with vanilla sweetness, followed by a quick blast of intense roast that's gone as fast as it appears. Finishes with the vanilla and chocolate, and a lingering hop bitterness that becomes a bit too much. However, that unpleasantness did fade as the beer warmed

overall- Interesting beer wherein the nose is quite different than the the taste as it gave no indication of the enjoyable roastiness. However, the finish of the beer took a bit away from my overall enjoyment of it at first. As it warmed though, all of the pleasant flavors became more enjoyable and that bitter finish became less intense. I'd recommend drinking this one closer to cellar temp.

Excellent porter, looks and feels great, nice chocolate flavour, not too smokey. All at a good price. Highly recommended, I'll be going back for more tomorrow.

Poured from a 500ml bottle into the modified tulip glass.
A - Deep dark, little carbonation moving into a thin mocha cap. Satanic lacing symbols appear.
S - Cocoa, freshly pulled roots, dark roast malts blend with earthy hops. I find the aromatics darkly intriguing.
T - Smoked meat, mashed up with bakers chocolate, raspberry, and hickory.
M - A strong point, nice tight lager profile, enough carbonation to quickly dry things out.
O - A good take on some of it's Baltic Brethren, I like the use of Fuggle hop keep this on the earthy side.
Cheers

Pitch black with a small head that disappear in seconds. Smell of black cherries, cola and molasses, not incredible. Tastes a little bit better but it still is far from the best baltic porter I've tasted. I find it too sweet and not enough on the chocolate/espresso side for my taste.