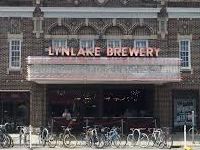 Pretty solid and relatively new brewery in the Lynn-Lakes neighborhood of Minneapolis, near Uptown. Decent beer. They usually have one or two cask conditioned, hand pulled beers, which is great. Nice view of the city from the rooftop, but far too many bros. b

Great location with many other bars within blocks (herkimer,Lyndale taphouse,muddy waters )... a cool old theartre converted to a brew pub with an outstanding rooftop deck, 10 or so brews on tap the vibe here is great the brews very good, tough to get a spot to park but worth a visit , liked the brews i had.

The place is packed with the denizens of the new condos that have sprung up in the past few years and the local natives tend to stay away. Most of the condo-ites go up to the roof top. The ground floor is quieter and more laid back. the beer is good, the staff is knowledgeable and pleasant. There is no food but they have a symbiotic relationship with a local taco tuck. There are plenty of places with food nearby so it is no big deal.

Oh yeah.....this is a cool place. An old theater that has been gutted and replaced with a contemporary brewery. They had beer pong and flippy cups upfront.....and for those gorgeous days at roof top deck that overlooks downtown Minneapolis. All the beer was good. Service was fine....no real impression made. They had 9 beers on tap....and two of the beers had nitro options as well.

Nice building. Old theatre creates a nice ambiance and includes some funky additions (like bicycle rims and spokes hanging from the ceiling). Wide selection of options. All taps are $6 or more as of this date (I'm more used to $5 tap beers). Wide selection of styles. I didn't talk much with staff as I was with a guest.
Oktoberfest was made with ale yeast. 2 taps are cask.
Solid. I will try again.

I've been to Lynlake Brewery a few times now, and a couple trends have come to light. The atmosphere is to a large extend dependant on the bartenders. It's been chilled and laid back sometimes, and angry and dark others. Staff wearing black head to toe, and blaring death metal are a great way to get my out of the door. (Cheer up bar staff. Life isn't so bad.)

The quality of the beer being suspect is also a theme at Lynlake. I've had some good beers, and I've had some that should have been dumped.

Overall, I'm not writing them off quite yet, but I'm not recommending them either.

Phenomenal, spacious taproom in an old theater, with a rooftop patio. Shiny brewing vats all in the back of the same, tall room. Great service, knowledgable and friendly. Had gear, swag, growlers and 750 fills for sale. Fair pricing on brews. Had 10 on tap, including nitro and cask pours, one of which was deliciously "adjunct'd" (cocoa nibs in a milk stout). That said, most of the beers had a very metallic aftertaste, despite being otherwise well crafted. Might revisit down the road, since it is a slick space.

The bar is central to the brewery, forming a large rectangle. Above the bar are hanging light fixtures dangling from old bike tires at several different levels, forming a large found-art mobile effect. The staff seemed very friendly at the bar. We split two samplers so we could try most of the beers and took them back to our table. I really like the solid copper tubing sampler trays--they are unlike anything I've seen before!

While we started working our way through the beers, I took stock of the rest of the brewery. Behind us, at the back of the space was the stainless steel brewhouse and rows of conical fermenters, cordoned off with appropriate red theater ropes. A few walls were tagged with a kaleidoscope of riotous colors and patterns in spray paint, bringing a bit of "street" into the place.

The beers were an interesting mix of styles from the obligatory but well crafted PonyBoy Gold to the oaty Rubbish amber. I didn't really love the Take 6 IPA due to its harsh astringency--like someone mixed lemon cleanser into the fermenter with the dry-hops. Other than the IPA, I felt that all the beers we had were respectable examples of the styles they were going for with minimal off flavors. The only one that really got me going though was the Peach Treat. That was a peach flavored smoked beer that should have been so wrong, but turned out so right!

Overall, I had a good time hanging out at LynLake with my peeps. I do think that they are making credible beers here now, but until I got to the Peach Treat would not have strongly recommended the place over several other local breweries. The vibe is nice, and the space is a cool one. I'm interested to see what these guys do over the coming year and will certainly stop in next time I'm in Uptown.