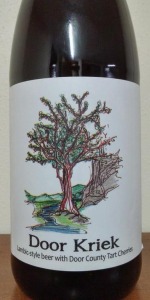 Door Kriek is a blend of lambic style beer that was aged in used french oak wine barrels for 18-24 months. It was then re-fermented with two pounds per gallon of tart cherries for three months. We are proud to be using 100% tart cherries grown by a small family farm operating in Door County, WI, an area long-famous for their superb cherry crops. Expect this Kriek to be tart yet balanced, complex yet delicate, and bursting with that pie-cherry flavor we love!

We recommend drinking Door Kriek in the first year, but it will age very well in the cellar.

2014 bottle. Reddish hue. Fairly effervescent. Flavor is cherries with a bit of acetone. I think we sat on this one too long. Overall, it was fair, but starting to head in the wrong direction

So i feel like if this had a cantillon label on it, people would be killing for it. The flavor is mild cherries (especially if they really put in 2lbs/gal, there is very minimal cherry flavor) with a very nice lambic backbone. Its pretty vinegary, not like an old LPG, but still rather vinegary. Overall this is a nice beer, but not what it was hyped to be

Nice oaky, funk, sour, delicious treat. I wish the cherries came through a little more and maybe the oak was a little more subtle to let the cherries really linger. In my mind Funk Factory can do no wrong. This has maybe been my least favorite FF release so far but it's still better than 95% of all American sours i've had. Can;t wait to try Frampaars!

750ml poured into an oversized tulip.

Color like a rosé, which was sexy, but also light than I expect from kriek.

Good funk to the nose, but doesn't pop with cherry, though you'll get suggestions. For the most part I felt the same about the flavor. Nice funky profile, not vinegary, barnyardesque, and light cherry. Maybe some suggestions of cherry pie.

Drank tart and funky with a refreshing quality.

Drank at March Madness 2016, thanks to elkhunter for hooking this one up. Who would have known when levifunk left his swiss army knife w/ me during an IP trade at DLD 2010 that 6 years later we'd be here, drinking his beer 2000 miles away.

Taste was nice, they went with french oak here, a slight difference, damn the cherry is so big up in here, Wisconsin so trill on dat cherry tip. It is like pie. Carbonation done well. Acidity is sturdy.

A heavy mineral and chemical element to the nose that carries through someone into the flavor, though the flavor brings fruit sweetness to the table. An austere, mineral / yeast driven take on the kriek that needs a bit of fine tuning to live up to the greatness of Frampaars and White Lodge.

Pours a beautiful red with a touch of pink foam. Smells amazing of cherries and funk. Tastes subtley tart with a very nice cherry flavour. Overall a very impressive balance of funk and fruit that rings more of Belgium than of the US.

Bottle recieved from @forgetfu for the Lambics Against Leukemia BIF. First run bottle, even before labels were ready! Poured into a teku, shared with friends all good bet should be. Hazy pink color. The cherry pops on the pour, awesome aroma. Deep Dark Cherry flavor follwed by funky tartness, this is exceptional. Carb was a little low, maybe due to age, but otherwise this was a VERY good beer.

A - Almost perfect, but not quite enough carbonation. A stunning shade of crimson/pink that is transparent. A think white head forms and quickly fizzes away into oblivion. Lacing is non existent on this hot/humid day.

S - A very pleasant fragrance of fresh tart cherry along with a musty and oaky aroma. Funk is light as are any vinegar notes.

T - Starts off with a slightly tart cherry juice flavor and is not overly sour. A bit of funk and mustiness comes through as well as a bit of oakiness. Some cheese and yogurt, but they are very subtle. Not much in the way of sour vinegar.

M - Very light in feel and carbonation. Refreshing and tart with a slow palate drying effect.

O - I enjoyed this Kriek style from FF. Enough tartness and funk without it being an intimidating sour bomb.

Overall - Doesn't quite impress like Framrood. Not as exciting of a fruit flavor.

The beer comes in a light red/pink color.

The flavor hits in the front of medium cherry flavor. Good essence of flavor, without getting jammy, yet still fresh tasting. A medium tart and lots of funk throughout.

A very well built beer and this sets them to become a premiere wild beer brewer.

A - Bright ruby red, this kriek certainly looks the part, shining with stellar clarity beneath a fleeting pink-hued head, cast out by acidity.

S - Incredibly aromatic and delightful tart cherries explode with fresh tannic cherry skins as well as a deeper, rich cherry pie filling nose. The funk that generously escapes from this beer is among the best; straight barnyard, horse blanket wild yeast funk with a perfect level of complimentary acidic tartness!

T - As if the aroma didn't have enough cherry impact on the senses, the flavor is total cherry overload; the first sip is like taking a bite of cherry pie! Subsequent sips reveal deeper complexity within the cherry flavor as well as the underlying funkiness that plays second fiddle to the fresh fruit flavor.

M - Light carbonation leaves the light-bodied beer feeling somewhat flat, quickly washing down the throat, with some slickness, to a faint tickle of bubbles upon the swallow as well as delicate tartness and acidity.

O - Levi's Door Kriek is an exceptional display of pure, unadulterated cherry aroma and flavor is almost unmatched and its underlying funkiness is a great compliment to the beer. The body leaves a little to be desired, however. Thin and somewhat flat feeling, the mildly tart, delicately acidic finish doesn't quite live up to what the aroma promises but, Door Kriek is an absolutely fantastic beer regardless, especially from a relatively young brewery. They're only getting better and better!

Doesn't have the same visual appeal as most krieks. Smell is sour pie cherries/berries. Oak barrel flavor is prominent, with some cheesy funk as well. The cherry and funk are there, but I feel like they are slightly overpowered by the oak. I definitely notice the medicinal quality mentioned by others, but it's not off-putting in any way. Feel is a little watery with mild acidity. One of the more complex krieks I've had. There's a lot going on here. Reminds me of a sour cherry, cheesy, bready dessert.

Pours hazy red with minimal head. Smell is just that of sweet cherry pie. Taste is tart cherry and cranberry with plenty of funk. Somewhat medicinal with mild acidity. Overall an enjoyable, well made brew.

This beer is a pretty pinkish red. The smell is amazing. So much cherry coming through. Same with the taste. The mouth is a tad undercarbed but this is another amazing beer from Funk Factory.

Damn hard cork to get out. Ended up breaking it and using a wine opener to get it. Poured light pink with slight bubbliness. Smells like a lambic. Has that musty smell that they all have. Slight tart aroma. Wow is this a bitter tart cherry taste. Big on that lambic flavor. It’s really good, but my only experience with lambic so far was Lindemanns and Door Kriek is much more flavorful. Will need to get used to it.

Another thanks to rudzud for sharing.

Overall good, but still a kreik which is my least fav of the sours, but fairly tasty.

A - Poured into a Kate the Great tulip a nice hazy cherry juice pink with a thin head that fades almost immediately to leave thin wisps and a light halo.

O - Overall this beer was delicious, the cherry is nice with good pie notes. Still, it's rather one dimensional though well crafted

A- Medium orange-pink body; looks positively blonde next to the Cantillon Kriek. Minimal head, thin collar, no lacing. I guess that it may look pedestrian to a world-class version of the style, but still, I thought this one was certainly looking flat in comparison.

S- Rich tart cherries. These montmorency cherries definitely stand out here. A decent bit of funkiness that is definitely up there with the Cantillon. However, the cherry tartness stands out more here than does the earthy Cantillon brewery funk does; if that makes sense. There is more fruit than funk or the wheat lambic base; which is not surprising. Smells great. [4.25]

F- As in the nose, rich, tart cherries that don't sacrifice the sweet tartness of the cherries. Also some funky cheesiness that could go either way. Definitely tart, no question about it. A good amount of funk, but the fruit definitely overpowers the funk in comparison to the Cantillon which smells like a ton of cherries sitting in the brewery which has its own unique smell. This is definitely worth trying in terms of the amount of cherries and the complexity this beer has. [4.5]

M- Medium bodied, a bit lower in carbonation than I'd like. I could easily tell which beer is which just because of how well carbonated the Cantillon Kriek was with the soft, funky mouthfeel it had. This beer does not have this and is on the flatter side. Still, this beer is nicely done with a fruit-forward finish with a bit of wheaty sweetness that evokes cherry pie. [4.25]

O- Very nice example of a cherry AWA that approaches what the Belgian masters do. A good bit of funk, a lot of fresh fruit, but I suspect that this beer could use more funk when it comes to the overall complexity. It would also benefit from a bit more carbonation. I found this very tasty and certainly worth trying at least once for any so-called sour fan out there. [4.25]

Pink and orange, with a white head that does not stick around.

Funk chased by proper acidity. Good lord this is something else, keeps you coming back for more.

Tiny residual sweetness, but chased away by the acidity and funk. Not quite still, it has a bit of effervescence left to accompany the acidity like a middle school dance chaperone.

If you have the opportunity to get it, do it. I know I'm not letting go of the two I have left.

Door Kriek from Funk Factory Geuzeria
Beer rating: 94 out of 100 with 134 ratings