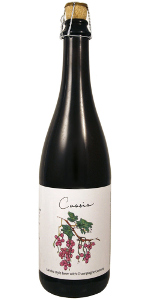 4.58/5  rDev +2.5%
look: 4.5 | smell: 4.5 | taste: 4.75 | feel: 4.25 | overall: 4.5
Cellared bottle. Burnt orange pour with a white head. Red currant along with lemon, pomegranate and light pear lead the nose with big floral notes, subdued hay, and great barnyard funk and light brett. Taste shows off the currant but again has the accenting fruits from the nose plus peach, with big funk, botanicals and now decent oak behind it all. Great balance while being super drinkable. Light bodied, but has wonderful fruity and funky textures to dance on the oak and subtle grains. Wonderful for a hot day or anytime you want a highly flavorful yet drinkable lambic
Jul 08, 2021

Taste opens with brief impressions of moldy cheese and heavy funk sporting a slightly grassy interlude into red currant and grapefruit peel surging past the mid-palate; orange oils and horse blanket funk remain steady toward notes of splintery oak and fading but juicy hints of red currant past the finish and through the swallow.

Mouthfeel is light-bodied and, paired with a casual jolt of fluffy carbonation, sees a taut density play with peaking, high-level acidity through the mid-palate; boggy acidity gives way to prickly tartness on the finish as a building, moister texture oozes past the swallow.

Pronounced, powerful funk, restrained acidity, and a fruit presence decidedly relegated to the backdrop (presumably via time in the bottle), this is a meditative sipper and thoughtful exhibition of the effects of age on the style; fruit steadily fades to funk, shifting focus while never entirely losing identity.

This was a pleasant, fruit forward treat; it didn't have a ton of depth as some of the Funk Factory beers can have, but it made up for that with an easy-to-quaff disposition. Great summer beer.

Reviewed by Benish from Utah

4.54/5  rDev +1.6%
look: 4.5 | smell: 4.25 | taste: 4.75 | feel: 4.5 | overall: 4.5
It poured a bright translucent effervescent peach color with a white foamy head that disappeared quickly. No sediment. A very beautiful and colorful beer without a doubt. At the nose, there is very heavy funk and horse notes. Juicy fruit tartness comes through with notes of peach. Really hard to put words into describing the aroma, it’s definitely untamed and wild; pushing forward a true fruit lambic beer. The taste incredibly juicy with tons of peach and nectarines - I’m well aware currants were added, not peaches. Perfectly sour and tart with the sweet fruit balancing out the acidity. Really surprised with the impressive notes of pitted fruits. It was light bodied in the mouth. My palate kept me wanting one sip after the other. Overall: this is an exceptional beer. I have very limited knowledge of that true lambic tradition, but regardless, this. Ever exceeded my expectations.
Jun 12, 2019
Rated: 4.44 by Dactrius from Netherlands Antilles

Reviewed by UWBadgerFan4Life from Wisconsin

F- A fair bit of wet cheese, good dose of barrel oak, lemon zest, fair amount of white grape-like flavour mixed in with some sweetness, easily the funkiest publicly released offering from this brewery to date. The cheesy funk is quite nice and works well in this. Nice complexity and in a strange way, this is the closest brew they've released to a quality Belgian fruit lambic.

O- With the complexity and funk, this is the best publicly-released FFG beer that I've had so far, though I haven't had the apricot or cognac barrel-aged ones. Definitely seek this out without prejudice. This brewery is on the rise and continues to release new lambics that end up being better than the previous release. I look forward to drinking more.