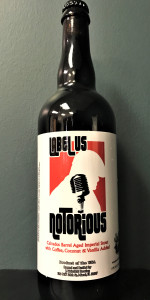 3/10/2019 - Apple to nose with hint of coconut. Silky MF, smooth on palate. Well balanced with the vanilla

A peanut sized chunk of something floating at the surface in the neck of the bottle was visible before even popping the cap. Upon opening and pouring the beer into a snifter, the chunk remained at the surface which shifted to the bottom of the bottle mid-pour, so I was able to pour the last dregs into a smaller glass where the tan clump plopped out. It was actually hard to the touch as I plucked it from the surface of the beer. My concern began to grow because these Florida pastry stouts usually only have small flakes of more dispersed coconut lipids, which melt instantly and have almost no feel to them. Thankfully, just before my flashbacks of mouse skull chicken McNuggets fully manifested, it did begin melting in the palm of my hand.

Anywho, the body is viscous black with other minor spots of oils surfacing after the burnt mocha blanket quickly disappears to nothing at all.

Smell is Butterfinger with vanilla bean white chocolate and hints of caramel corn. As it warms, charred mocha coffee and brownie crust emerge. The aroma is hypnotizing.

Taste is decadent and a little boozy as the apple brandy barrel makes its presence known, adding sharp oaky liquor notes to the extravagant flavors of coconut filled pâte à choux with chocolate ganache. The body is just thick enough to dampen the barrel to tolerable levels of booze, allowing for additional notes of cinnamon coffee and vanilla custard to surface. The finish is semi-sticky and substantially warming all the way down.