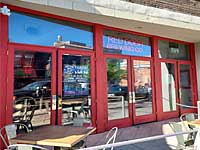 Rated by RiceOwls27 from Texas

3.91/5  rDev +6.3%
vibe: 3.25 | quality: 4 | service: 4.25 | selection: 3.75
I recently visited Red Door Brewery in Albuquerque. It is located in an area of Albuquerque with a lot of hotels (I stayed at Hyatt), so the location is good for visitors. The décor is basic but the bar is impressive. They have a dart board. They are open from noon to midnight on Thursday and Friday, 7AM to midnight on Saturday, and noon to 10PM on the rest of the days. I had three beers while there. The beers were surprisingly good considering it is a relatively unknown brewery. I also bought growlers.

They gave me free chips. The bartender was very friendly and knowledgeable and he offered me samples for every beer I wanted to try. They are small but they have a good selection considering it is a small brewery.

Reviewed by qjholler from New Mexico

3.57/5  rDev -3%
vibe: 3.5 | quality: 3.5 | service: 3.5 | selection: 3.75
A decent but not particularly impressive brewery. The vibe at both locations I've been to (Gold & Wyoming) is kinda meh. Bland modern digs. The red doors make for an okay splash of color but it's really pretty simplistic in design in a way that doesn't really invite you in. The beer is good but nothing remarkable, the service is passable, and there is a good range to choose from. Certainly not bad by any stretch, but there are plenty of better choices in town.
Mar 24, 2018
Rated: 3.64 by mkyer from Connecticut

3.35/5  rDev -9%
vibe: 3.5 | quality: 3.25 | service: 3.75 | selection: 3
Dropped in here with a small group on an evening in the middle of the week. The exterior had a nondescript industrial park look, but the interior was modern and pleasant with a spare, almost Scandinavian feel. There was an acoustic guitarist playing live. There were a few picnic tables outside and an independent food truck serving. The waitstaff was polite, friendly and knowledgeable about the beer. The beer selection was small; the ones I had were decent but not outstanding. The standout for me was the Peach Patersbier.

With all these things going for it, the only thing missing from the Red Door were customers. There were only about 5 in the place, other than my group, which seemed surprising in the prime time we were there. This was a relaxing, decent place to have a beer, but it doesn't stand out in my mind among all the other similar taprooms in Albuquerque.

Rated by csgeorge from Texas