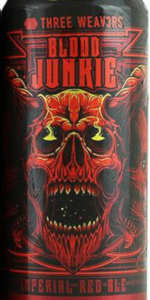 Back for 2015 in the 22 oz bottle. I purchased this one at Bottlecraft in San Diego. Label describes it as an Imperial Red Ale, rather than any kind of IPA. It's hoppy, but the big malt makes it a Red/Amber Ale in my book.

Gorgeous creamy off-white foam in the Rodenbach Grant Cru goblet. Prettiest beer yet in my new tall glass. Such a dark red, coppery brew that licks and sticks to the glass. Fragrant with some kind of resiny hop. The malt is quite substantial. No one would call this a light body, and in fact it's a little sticky in case you slop some down your sweater.

Rich and sharp at the same time. Roasted malt with some sugary notes. I'm thinking of maple fudge with a vodka chaser. The hops are resiny and a little dank. I think I'd buy this just for how beautiful it looks in the glass. And how creamy and sexy it is on the lips. Jeez, I'd better go drink some water.

F: Tight, fine carbonation smooth on the palate with sticky sweetness on the lips.

O: A very nice well rounded beer. Not much you can complain about

Appearance - Pours dark copper in color, with a light reddish tinge when held to light. Sandstone colored, two-finger width head that displays good retention before dying down to a thin, consistent layer of suds across the surface. Chunky lacing,

Taste - Follows the nose. Candied citrus and a bit of grapefruit hops, playing off a caramel base that hits primarily on caramel, but adds touches of chocolate and roasted malt to round out said base.

Mouthfeel - On the fuller side of medium-bodied with fair carbonation. Slick, slightly creamy mouthfeel makes this an easy drinker, even at a boastful 8.7%.

Overall - Really nice Imperial Red, and quite reminiscent of Arrogant Bastard, if I had to compare. I'd love to do a side-by-side one day, hopefully sooner rather than later.

I find this beer to be spot on like the one on the bud light dog. Eazy breezy smooth caramel malts like Raul during last call, then with a light bouquet of floral hops like the one your girl dropped at the toss of her best friend’s wedding.

It poured a very dark and deep red, closer to a dark maroon, bordering on brown ale territory. The head was a nice inch and a half of decently dense foam with the slightest red tint. The smell was a balance of sweet malt and piney hops. There were more hops on the nose than I had expected. The taste followed the nose. The malt led the way while the hops were all over the finish. They were piney and citrusy and bright. With a medium body, a dry finish helped to keep me wanting more. Only towards the end did I notice the sweetness from the malt sticking to my palate. Very nicely done imperial red brought a balanced drinking experience.

On tap at The York in Highland Park, CA.

Pours a clear dark orange-brown with a foamy khaki head that settles to a partial film on top of the beer. Tiny dots of lace form around the glass on the drink down. Smell is of toasted malt, citrus fruit, and candied citrus zest aromas. Taste is much the same with citrus fruit, candied citrus zest, and toast flavors on the finish. There is a mild amount of hop bitterness on the palate with each sip. This beer has a lower level of carbonation with a slightly crisp and medium bodied mouthfeel. Overall, this is a pretty good beer with a nice mix of toast and citrus qualities.

Red and ugly like the label. One finger beige head.

Taste pretty good with a bit of cheezyness like a kid wearing dad’s sneakers.

I tried the Blood Junkie at the Tap room. It poured a clear amber with off white head that left a spotty lace. The scent had hints of pine. The taste was sweet malt with pine like bitter finish. The Mouthfeel was medium in body with good carbonation. Overall it's a good beer.