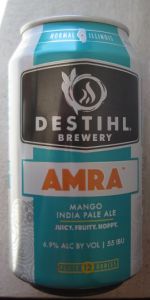 Notes: ‘Amra’, which is Sanskrit for Mango, intertwines fruity hop characters of a west coast-style IPA with the fruitiness of juicy juicy mangos, resulting in an elaborate and psychedelic tapestry of flavors that were absolutely destined for each other in this beer. Cheers!

View: Beers
Reviews: 44 | Ratings: 168 | Log in to view all ratings and sort
Reviews by ThaJokerWild:

I can dig a lighter IPA, of which I'd characterize this one. Mango is subdued, so definitely not a good option for those looking for extra juicy, mango smoothie sort of thing. But it all works together nicely, a pleasing bittersweet interplay of hops and malts, with a touch of mango, and an easy grassy and slightly dank finish. I don't think this approach to IPAs is so du jour these days, but, as for me, I appreciate the restraint.

Fruit in aroma is mostly from fruity hops. The mango is more in the mix and blended. Other hops are more herbal and weedy. There is also an earthy quality. Light pale malt and no specific sweetness.
Kinda' cloudy and closer to yellow than amber. Sticky, lacy off-white head.
More fruit in the taste with a stronger fruit character mixed in. A mixed presentation of hops with elements noted in the aroma, but with a different mix and presentation. Notable bitterness streak that is not too much but certainly noticable - and it mixes with the hop flavors nicely. Strong on earthy and herbal, certainly on the lingering when it is stronger than the fruit. Mango is really blended rather than dominant, which is kinda' nice. A touch of sweetness shows in time and it's kinda' nice, but the herbal hops and bitterness are still prominent.
Full moderate feel and nicely carbonated.

From a twelve ounce can, this is a lightly hazy gold colored brew with a towering white head. The aroma is fruity and flowery, thick with spicy hops. The taste is at once both bitter and sweet, malty, and intense. Not a fan of fruit beers, this one is not overly fruity...it is, however, delicious. Full in body, hoppy, bitter, and interesting. Light fruit throughout, and flavorful.

12 oz can. Pours hazy orange gold with a medium fluffy white head that retains well and laces the glass some.

The aroma is bready malt with sweet tropical fruit and a little resiny hop.

The flavor is lots of sweet tangy tropical fruit with some bready crystal malt and a medium resiny hop finish. The mouthfeel is medium to full bodied with smooth carbonation.

My DESTIHL Day CANtinues, wending & winding its way to our finale, which is this beer. I had not really intended to CANduct a brewery horizontal today, but when my earlier plans proved to be unworkable, this seemed like a nice back-up plan of action. You gotta have a plan.

From the CAN: "Unfiltered[-]Enjoy Fresh[-]Keep Refrigerated"; "Support Flavor - Boycott Bland (tm)"; "‘Amra’ (Sanskrit for Mango) intertwines fruity hop characters of a west coast-style IPA with the fruitiness of juicy mangos, resulting in an elaborate and psychedelic tapestry of flavors that were absolutely destined for each other in this beer. Cheers!"

The end beCAN with a Crack! of the vent, followed by a slow. gentle Glug. I know that it read as "Unfiltered", but I like clarity & I remain hopeful at all times. My efforts seemed to have paid dividends as I got a glassful of oh-so-slightly-hazy Yellow-Golden colored (SRM = 4 - 5) beer & while it may not have enticed The Gelt Gang, it looked pretty good to me. Nose smelled very tropical, not just of mango, but also of pineapple & underlain with a biscuity maltiness. It was like preserves spread on toast in the tropics. Mouthfeel was medium-to-full, not quite creamy, but big on my tongue. The taste did not make the current mistake of being so tropical as to lose its bitterness (55 IBUs), since bitter is a hallmark of the style. Instead, it left a slightly grapefruit citrusiness in place while definitely not hiding the mango. I was really digging this, to the point that it was nearly half gone before I even realized it! At 6.5% ABV, this might be tough to spend a day with on the beach, but it would definitely get a seat at my table or in my cooler. I really liked the interplay between the malt and hops in this one since it was neither too bitter (yes, there is such a thing) nor too sweet (I dislike that in an AIPA), but just right with a toasty, biscuity flavor to shore it all up. Finish was dry, but appropriately dry, not gasping or puckering. I really could drink this on a regular basis.

Appearance: Pours a clear goldenstraw with a nice head; good retention and swaths of lacing

Smell: Very fruity, with cantaloup and mango as well as piney bitterness

Taste: The cantaloup and mango tones lead off, bringing a layer of sweetness but an overwhelming metallic bitterness arrives in the middle and dominates the finish, obliterating the other flavors

Overall: Rather disappointed with this beer as the flavors really clash and leave the more interesting elements in the dust

S: Light breadyness & mango, all kind of mute as this warms

My first from this brewery.

We'll, I don't need another beer this early in the day, but my car isn't ready and Melt bar is my waiting room. They have had this sitting on tap since the end of July and it's not selling. Melt patrons are somewhat discriminating.

This thing is a little flat, but reasonably so for an ipa. The aroma is fresh hops plus fresh fruit from the mango.

It has a somewhat unique taste. Bitters, big time, plus fruit in the form of mango, but the fruit is far enough down to mostly be tartness.

There aftertaste is a sour bitter that works. Nice brew. I'm glad I bought it.

On tap. Poured out a clear, golden color with a small, white head of foam. It smelled of mango, citrus and toasted caramel. Nice sweet mango flavor with citrus, pine and caramel.

So cloudy and pale orange in color with a slight off-white froth. Aroma of mango, orange, grapefruit and faint perfume.
Bright citrus notes of grapefruit and orange along with pear and mango. Certain florals and faint pine in the finish. Medium and crisp and a bit rough around the edges but all good elsewhere.

The look, smell and feel of this one was all good, but the flavor was overly bitter and almost rancid to me. I tried to let in warm in hopes that it would open up and allow the fruit to come through, but it just became more bitter. Unfortunately this was a drain pour for me.

Nice mango sweetness. The brewer did not go overboard with the fruit. The base IPA is a bit uninspired though. Looks good and has a nice texture. No problem drinking the 6-pack but probably would not buy again.

Pours a slightly hazy dull gold with thin soapy white head, dots of lace on the glass. Smell: mango smoothie, a little grapefruit and lemon rind. Taste: mango and pineapple juice, orange, lime note, cracker back. Light bodied, a little slick. Not a great IPA by any means, but a nice *real* mango beer that's not a fruited wheat.