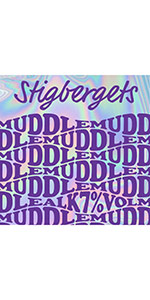 Pours a hazy golden orange with a finger of white head.
Smells of grassy and citrus hops.
Taste follows a bit resinous but predominantly grapefruit and orange.
Medium body with good carb levels.
Overall a good beer, gold to try more from these guys.

A: The body is opaque matte yellow with a 2 finger white-colored thick head. Shows good retention and good lacing.
S: The aroma is resinous and grassy, providing just a small hint of citrus. More like a Chinook and Mosaic.
T: Taste starts off with a good resinous profile being supported by a little citrus profile in the back of grapefruit and orange. To the back of the mouth, a spicy touch appears to be present.
M: Body is medium. Carbonation is good. Alcohol is unnoticeable. Bitterness is high and resinous-ness is also high.
O: Very interesting IPA though more resinous that what I like.

This was very well done and I was impressed. Good to see other parts of the world catching on to the NE ipas.

Appearance: A hazy golden straw yellow colour with a one finger white head that dissipated fairly quickly and left some lacing.

Aroma: Mango, pineapple, grapefruit, orange with a hint of pine.

Taste: Generally quite light and short, but there’s mango and peach followed by bitter grapefruit rind and mandarin rind.

Overall: Aroma and taste were nice but was a bit disappointed that the taste was quite light and abrupt, especially when compared to top Stigbergets IPAs like GBG and Amazing Haze.

200 ml glass from tap. Appearance is a hazy yellow shade, with a somewhat thin head of white foam. The aroma is citrusy, with tropical fruits like mango and grapefruit. Taste-wise, it is a sweet and juicy with loads of tropical fruit flavours. Mouthfeel is solid and decent, with a medium body and an average level of carbonation carbonation. Its hard to differentiate this from Amazing Haze, except for the appearance, and is equally good!

T - The taste follows with some diacetyl notes added

O - A real good NE style IPA, not the best I've had though

Really hazy yellow color with white head. Aroma has green hop notes, quite dank and raw. Taste is quite weird, grassy, dank, some chives but still a raw hop and also yeast flavor. Medium body with lower carbonation. A bit disappointing in comparison to the other Stigbergets IPAs.

Hazy yellow to orange with a one finger high, white head that leaves lacing on the glass.

So drinkable! This is dangerous... I could keep on all evening :)

I love this smell... pineapple juice with a dab of vanilla and a hint of resin.

Taste is juicy with a ton of pineapple and mango, rounded out by a perfect balance of bitterness and sweetness. I could drink this all day...

Soft and pillowy mouthfeel, slightly more than medium bodied. This is almost too drinkable, it just disappears.

The colour is yellow-orange; the liquid is cloudy. Some lacing occurs.

The fresh smell got notes of exotic fruit juice with some tartness. Distinct bitter grape fruit flavours and some other citric fruits.

A grand bitterness starts the taste, some chemical sal ammoniac and gunpowder in the background. Lemon/lime, grapefruit and some fruity sweetness. Passing notes of sweet lemon candy. Full body. The aftertaste got some chemical bitter notes, too. But there is also some clean sweetness with hints of caramel and canned fruit salad. The finish is surprisingly short with lemon candy and apricots.

The carbonation is medium strong; the small sharp bubbles are short-lived. The liquid is creamy.

This is a good and fresh AIPA, but the chemical flavours and short finish lowers the score.

Muddle IPA from Stigbergets Bryggeri
Beer rating: 88 out of 100 with 22 ratings