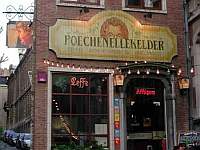 View: Place Reviews
Reviews: 61 | Ratings: 96 | Log in to view all ratings and sort
Reviews by gfreed:

A great place for a number of reasons, some of which actually relate to beer. There are puppets hanging everywhere; some are monks, some are clowns; I saw death hanging just over my own table. And it's dark, so don't expect to be able to read your phrasebook or your map. This evening, the music selections were interesting: lounge-jazz renditions of 1970s hits like "Smoke on the Water" and "Stairway to Heaven." Well.

If you get a table in the front, you can watch the hordes of people taking pictures and posing in front of the Manneken Pis which, for whatever reason, became the symbol of Brussels many years ago. I am a former adolescent boy, yet even I fail to see the attraction. If there wasn't a fence around it I'm sure people would be lining up to drink from the stream. Prove yourself a real grown-up: skip it and head here instead.

The food offerings are limited: cheese, soup and a few pasta dishes. I had the spaghetti Bolognese, which was packed into a small, attractive dish and buried under a blizzard of parmesan cheese. My daughter would have loved it. The sauce was light, the pasta was well-cooked and the cheese was... well, cheesy.

Excellent beer list, both tap and bottles. I had a Forest Blonde (bottle) and a Slagh lager (tap); the waitress didn't know who made it. The former was a pale ale that tasted nearly like a German lager; the latter was rather eh-- somewhat like a fair Pilsner but a lot fruitier.

The service is spare-- you'll be left alone once you order, so if you want another round you'll have to make yourself known. The Sunday night I was there it was quite busy; even so I managed to stay for a hour with nobody pushing me out the door. This is clearly a local favorite, based on the number of children and dogs in the restaurant. Very homey. Everybody smokes and the ashtrays are full. At first I thought the smoke might ruin the beer for me but I soon found that it only added to the atmosphere. Absolutely put this on your beer tour.

Both beers were drinking fantastic and my wife liked her wine and Aperol Spritz. Tap and bottle menus comprised one of the stronger beer lineups that I came across in Brussels. The snack mix was tasty too. Service was efficient as we never had to wait long for drinks. Not much engagement from the waiter but that was okay with us. Loved the creepy puppets and quirky, ramshackle vibe in here. Our overall experience was fun, and we would certainly come back.

On a beautiful late summer afternoon, I had the chance to re-visit this wonderful beer cafe. My first visit was many years ago, on a cold winter night. Then, I sat inside...this time, a colleague and I shared an outdoor table. This place has a wonderful Belgian beer list...countless options, many of which I have never seen. They are always served in the brewery's specific glass, at the proper temperature, and poured for you with great skill and care. The prices are incredibly reasonable, and the ambiance is pure Brussels The only downside is that the food menu is limited and fairly average. Still, it is absolutely worth a visit if you are in the area.

A great beer bar near the Mannekin. Extremely knowledgeable staff, tell them what you like and they’ll find a Belgian beer along those lines for you. Great selection if you are looking for some harder to find beers, which keep getting harder to find with upsurge in popularity last several years. A visit is at least hour and a half for a couple beers to enjoy. Decor is wonderful to browse through. Good place after dark as inside is more interesting than outside.

This was our first stop in Brussels. Visited the nearly adjacent Mannekin Pis statue and after the obligatory photos went for a beer and some food.

The weather was cooler so we went by the attractive terrace and went in to the bar. It has a several rooms on the main floor and a cozy overflow room on the lower floor.

It is bright and airy and decorated with a strange mix of Medieval crossbows, old marionettes, beer memorabilia, some costumes for the Mannekin Pis statue, etc.

The beer selection was impressive. Yes they have several Cantillions but they offer so much more. While we were there, they were just rolling out the selection of Christmas beers. As expected, everything is served in the correct and marked glassware.

The food was very good. We had the onion soup and a great sausage and cheese sampler platter that went great with the beer.

Service was friendly but a bit slow. However, they did have a good crowd and we were in no real hurry.

I would have no problem going back for a repeat visit!

Stumbled on to this place after being underwhelmed by the Mannekin Pis statue. Beware- this little cafe is adjacent to one of the most touristy spots in Brussels. But, the patio was great even if the service was slow (par for the course in Brussels).

I was shocked by the beer selection - they had a better selection of Cantillon and 3F than any other bar I visited in Brussels and Bruges, and I hit nearly every one reviewed on BA. There were several that weren't available on-site at either brewery. I enjoyed a bottle of St. Lam and LP Kriek along with a snack of sausage and gouda, which was all that was available for food. It wasn't clear if they normally have a wider menu or if we came at an off-time.