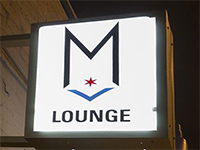 Awesome variety of beers on tap (IPAs, Belgian Tripels, Rauchbiers, etc.), along with cocktails and a full menu at this neighborhood brewery. They recently did a barrel aged release that sold out, which is indicative of their rise over the past year or so.

They consistently do events with community members and represent the city well. One of my favorite places to go!

Stopped by the Maplewood Brewery and it is in a non-descript place off an ally/side street in the near North part of Chicago. It had a small bar and then several tables to sit and have drinks. The quality of the food and beer were good....service was a bit grumpy and didn't seem overly interested to make the visit experience notable. Fifty percent of the beer offerings were hazy ipas or some variant....and there wasn't much difference between them all. The food was good. I thought the beer was overpriced....especially for a sampler.

Visited at 4pm on Easter. Triangle shaped room, 10 person bar with tables and window rail behind. Exposed brick and wood, vintagey leather chairs give a bit more of a dive bar feel. Vibe was chill when I was here, but the place doesn’t seem big enough to get raucous. Music is 70s funk records from a turntable. A dozen of their own on offer, tilting toward the hazy IPAs they are known for. Pricing is reasonable, 6-7 for pint pours. Overall a nice place, but the beer is a bit better than the digs for me. But that is just personal preference.

Great local place to relax. Very cool space. They also have some distilled spirits that are worth trying.

Love their Sons of Juice. Didn't have on tap but did buy a fresh 4-pack. AWESOME. Brewery was loud, but that's a good thing. People having fun! Selection was not bad, just not what I was hoping for. I love this place!

Wedge shaped tap room at the end of a quiet residential street. The Lounge has a relaxed vibe and tons of exposed brick. Quality of the beer is mostly well above average. Service was fast, friendly and helpful. There are fourteen beers on tap. They also have a cocktail program using spirits distilled on site. The food is provided by a caterer next door but I did not try anything yet.

The Maplewood Lounge has been open a month now, and is already firing on all cylinders. Located on a dead-end street, right up against the Metra tracks & Kennedy (hmm, familiar) with a somewhat hidden sign until you're right on top of it. Semi-speakeasy vibe with dim lighting in the wedge-shaped room. Candles on the bar. Comfortable upholstered swivel chairs at the bar, and wooden tables lining the space. If I had to nitpick, it was too dark and the bar stools were too tight at the bar. Minor stuff. Merch and to-go cooler to the right of the bar, and immaculate gender-neutral restrooms right around the corner. Steve Miller Band on the stereo.

Service at the bar was timely and friendly, they struck up a conversation when time allowed. As the menu board states, "F*** Yeah! We got FOOD!". Snacky pub grub, even a Publican sausage on the menu. Food comes through a side window behind the bar, from an adjacent kitchen next door.

Selection was good, about a dozen beers and half of them were new to me, including an RIS and BA Barleywine. Quality stuff on a cold winter day, and the margarita gose wasn't shabby either. They have a fairly extensive list of beer cocktails that incorporate their house distilled spirits. Sampled the Fat Pug white whiskey, which was fairly sweet with pear and caramelized plantain esters/s. For a brewery taproom, the drink list was pretty "non-beer person" friendly with cocktails, frozen drinks, etc. using their house spirits.

Overall it was a cool little spot, and practically around the corner from Owen & Engine. Not far from the usual Avondale spots either, Beer Temple, Metropolitan, Kuma's, Dmen, etc.

Maplewood Brewery & Distillery in Chicago, IL
Brewery rating: 4.04 out of 5 with 1268 ratings