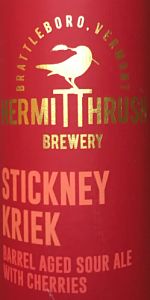 Notes: Barrel aged sour ale with cherries. We are very proud of this beer, and named it after the stunningly beautiful Stickney Brook in nearby Dummerston. 10 months of oak-barrel aging over sour cherries produced an exceedingly dry, deeply complex, and bitingly tart beer with a multi-layered balance of cherry, vanilla and toffee. This is not a lambic, but it's as close as we've come. Very limited quantities available.
View: Beers | Place Reviews
Reviews: 7 | Ratings: 41 | Log in to view all ratings and sort

Can from the source.
Brilliant dark gold in color with a thin white head that quickly dissipates. Lemony tart nose with hints of funk and stone fruits. Taste is more lemony tart acid with bits of cherry. Its quite tasty but most of the kriek's I've had are bright to dark red and have ton's of cherry aroma and flavor. This one not so much.

T.F: Sweet/tart up front... or at least you get the sense of some sweetness. Moderate acidity... baking cherry, jam, and oak. Apple-cider vinegar, green fruit, and funk. Nice barrel presence... and the cherry is fantastic. Medium to light bodied. Sticky cherry at the finish.

Tall can purchased at the source, and lovingly stored in my fridge for the past 4 or 5 months.

Pours out with a light haze, plum in color with a ruby haze, just a slight fine bubble film and minimal bits of lace left behind.

Fruity nose with some tart cherries on the nose.

A: The beer is hazy reddish amber in color and has a light amount of visible carbonation. It poured with a short white head that quickly died down, leaving a thin collar around the edge of the glass.
S: Moderate aromas of sour cherries are present in the nose along with hints of oak and associated vanilla.
T: The taste follows the smell and is somewhat sour with flavors of cherries and hints of oak.
M: It feels light- to medium-bodied and tart on the palate with a moderate amount of carbonation.
O: This sour ale is very drinkable and isn't too sour or tart. I really liked the strong notes of cherry flavors and the hints of oak from the barrel aging.

This was poured into a tulip. The appearance was a semi-burnt dark red color with a quickly dissipating finger’s worth of white foamy head. No lacing. The aroma starts off sour cherry. Dry tart woody balance slides in. An ample amount of that normal "green apple" sourness comes back like most Hermit Thrush beers do. The flavor brings in the sour first and then a nice underlying sweet woody barrel side comes in. Aftertaste is the green apple and tart cherry leads into a quick dry finish. On the palate, this one sat about a light to medium on the body with a nice sipping quality to it. Low carbonation. Normal Hermit Thrush sly stickiness. Overall, this is probably their best to date beer.

Poured into a Chimay goblet. Gorgeous dark red appearance. Crisp, tart, cherry forward... brilliant stuff from Hermit Thrush. Slight jamminess which really opens up the flavor profile. Pricey at $8.50 a pint but worth it.

Been glad to see some Hermit Thrust cans around recently, even though they're pretty expensive at $7-8 bucks a pint. Then again, you've definitely gotta consider what's inside these pint cans... this beast, for example, is an amber ale aged for 10 months on sour cherries in oak barrels. Well, damn. Let's get right into this one, then, shall we?

Pours a rather unimpressive ruddy amber color with a retentive but thin off-white head that barely builds at all. The surface is hazy and spotted with patches of slight foam. No lace present. Seemingly a decent amount of particulate matter in here, which makes sense given the long aging period on cherries. Carbonation seems rather uneventful. I'm sure there's a lot more to this than there initially seems to be, however.

The nose is on point with a sweet/sour cherry candy scent and a bit of barrel funk. Slight vanillin and tannic compounds coming through as well. Some sweet toffee from the base beer here and there. This kind of reminds me of another cherry sour I've had in the past few months: Almanac's Cherry Vanilla Dogpatch. I really enjoyed that beer, so I'm excited to see what's going on with this one on the palate.

This is nowhere near as mind-shockingly sour as CV Dogpatch, that's for sure, but it definitely doesn't lack in tartness. A deep and well-built malt bill backs up an intense rush of sour cherry that nevertheless remains rather tamed by the oakiness and caramel flavors on display. Slightly earthy and punchy with a great acidity and semi-balanced sweetness.

Feel is velvety-smooth and rather chewy, with a powerful heft belying its low-ish ABV. Even carbonation and a very round profile support the acidic cherry flavor, somewhat reminding me of Rodenbach Alexander but more forward and less "blended," if you will. Loving how obvious and apparent on the palate the cherry flavor is here. This was well worth the price of admission and I look forward to enjoying more HT beers soon. They're definitely one of the best young, up-and-coming breweries from VT, and they have a great barrel aging/sour program to boot!

Stickney Kriek from Hermit Thrush Brewery
Beer rating: 90 out of 100 with 41 ratings