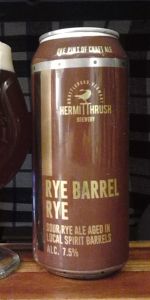 So what's this, basically a double rye'd sour? I'm on board. I don't see enough rye beer around, or even those aged in rye barrels, maple rye barrels in this case. I imagine that will add a nice sweetness in order to offset the spicy and zest rye that will inevitably come forward. Let's dig in

Oh wow, this is an all on assault in the nose, even from the second I cracked open the can I could tell I was in for a wild ride. I'm picking up on aromas of spicy rye, earthy whiskey, sticky maple, red wine vinegar, apple skin, old leather, and caramel malt

A medium body pairs with moderate prickly carbonation, resulting in a creamy yet tart beer. Finishes mostly dry but coats the mouth a bit

I really liked this one! It's a unique take on the rye beer concept, and one I quite enjoy. I will absolutely pick this one up again if I see it

A couple years ago, I went to a sour-beer-focused fest in Walpole, MA put on by Jack's Abby and Springdale. Amongside some of the best beers I had there, including the phenomenal Duck Duck Gooze by Lost Abbey, were a few surprises that I really enjoyed and which impressed me so much that I still recall first enjoying them vividly several years later. The first brewery was DESTIHL, who had a small tent in the back and never had more than a few people in line. The second is this small brewery from Vermont. Though I've had some of their beers before (and they can be hit-or-miss, to be sure), their Rye Barrel Rye was probably, in my opinion, the most underrated offering of the fest. And now, several days before this year's iteration of the aforementioned fest, this beer has found its way into my hands once again... this time from a can!

Pouring a beautiful deep mahogany color with a khaki colored head into my stemware glass, RBR immediately dazzles the senses with its gorgeous hue and excellent foam retention. Good legs and moderate soapy lace appear as the head dissipates down to about a half-finger, though those suds stick around for the entirety of my drinking experience. I can't get over what a great coloration this beer has, it's just gorgeous. Hazy, of course, but very translucent, and more like a deep, radiant brown than any kind of red ale. I love how this looks. So great!

This having been aged in maple rye whiskey barrels comes through quite apparently on the nose, with a helping of stiff maple sugar, baking spice, leather, tannins, earthiness/tobacco, slight/appreciable touches of acetic acidity, and light aspects of stone fruit mingling with ripe grapefruit tartness. This is a strong, darker sour ale, of course, so there is definitely some crystal/brown malt going on here. I don't know the recipe, obviously, but it wouldn't surprise me to find out this has some rye malt in it as well, just to follow the concept of the barrel aging. This is a very complex and intense-smelling sour beer, though, that much is certain.

Immediate hit of puckering acidity on the tongue followed by flavors and elements of brown sugar, chestnuts, spice, passion fruit, leather, oak/barrel character, and toasted bread followed by a warming ethanol presence and a slightly-malty caramel finish. A touch more acidity follows the intense finish, lingering well past each sip's fading moments. Though at first the carbonation seems quite intense, it evens out once the second half of my can wanders into my glass. This is very well-crafted beer, and may be the best "Autumn sour" ever, dethroning Jolly Pumpkin's Fuego del Otoño. Wait, "Autumn sour" isn't a style, you say? Nonsense... take one sip of this bracing, complex, malty, flavorful wonder and I'll challenge you to find a better season suited to enjoying it. Wonderful stuff.

Poured into a tulip, the appearance was a ruddy brown color with an ever so sly film of a white head. Stringy lace quickly slides. The aroma starts off with the sour to semi-sweet apple vinegar normally associated with their beers. Some faint rye underneath. The flavor leans puckering sour with a sparkle of the dry woodiness. Green apple sour aftertaste and quick sour dry finish. On the palate, this one sat about a light to medium on the body. Mild carbonation. Very puckering sour exacting some tart dry woody feels along my tongue. Overall, as a sour ale it works for it’s simplicity but fans of rye barrel beers are probably going to be disappointed.

From a 16oz can, undated. Served in a nonic.

Pours a thin-looking translucent maple syrup color with less than a finger of short-lived head, minimal retention and no lacing.

The nose is tart, sharp and fruity and the taste is the same. Raisins, dried cherries, cranberries, cinnamon, pipe tobacco, and apple cider vinegar. Yes, it's sour but not brutally sour, more like just very, very tart.

Feel is clean and refreshing and light-to-medium bodied. Although the beer looks dead-flat in the glass there is a light, fizzy effervescence that keeps things moving along.

Overall, a really nice, super crisp and clean beer. I usually don't much care for sours but I get a craving now and then just like I don't really like liver and onions but I feel like I have to eat it once every few years... I forget what point I was going to make with that but, at any rate, good beer.

Moderate to vigorous pour yields a 1/2 inch head that dissipates down to a ring in a few minutes with a mahogany body. Nose of grapefruit, candied lemon, and oak. Taste follows very, very nicely with a nice mouthfeel. Overall, their finest moment!