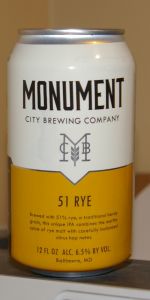 12 ounce can poured into a tumbler pint glass.

Pouring slightly hazy and amber with steadily rising bubbles, it is capped with just under two fingers of soapy, off-white foam. The nose isn't very strong but is rather nice, featuring rye, spice and light lemon citrus. Starting low to medium sweet the rye , bread and light caramel flavors fade to a more dry, mild peel bitterness for the finish. Carbonation is moderate and the medium-full body is soft and creamy smooth.

Small sample at Salisbury MD Good Beer Festival. Pours a golden amber with a brief off-white head. Initial impression is rye and citrus. Mouthfeel is medium and slightly sticky. Finish is bready and a little bitter. I'm not a big rye enthusiast so maybe that skews my review.

Had on tap. Golden cloudy body with two fingers of foam, higher carbonation. Earthy and rye forward with some caramel, and pine resin in the smell and taste. Not overly complex, but delivers on the promised flavors without getting too weighed down. Carbonation helps with this, but could be a little less. All around solid beer

Enjoyed. Attractive orangey body with fluffy head on pour.Full rye flavor but not overbearing or harsh. Nice citrus influence from hops. Soft creamy body. Overall a very nice full flavored but still easy going refreshing beer.
I had an earlier can from 6pack soon after arrival to store. Actually found that to be a bit harsh and slightly syrupy. This 2nd can seemed to have mellowed both taste and rounded out the body.
Nice job Monument.

Have actually enjoyed this beer many times before both on tap & from a can. This (overdue) review is based on a draught pint at The Brass Tap here in Baltimore. Another reviewer remarked on the similarity between this beer's color and that of the bottom half of the can. I would add that the head is a good match for the top half. Anyway, it disappears quickly leaving some nice lacing. Hop pine on the nose with maybe a hint of rye bread. More rye spiceness on the tongue. Well carbonated. Not too shabby.

Had it on tap in a growler from Elkton.

11/8/19 - Had 1 can from Elkton at a later date. JK likes more than DL but still likes it. Bourbon type finish.
Buy a 6 pack from Elkton some time.

appearance: nothing too special; a nice golden shade (similar to that of the can) with a foamy white head. the head quickly vanishes, leaving only a fine layer of light froth.

smell: pine, floral notes, with a nice backbone of sourdough. it's good but not super noteworthy.

taste: a slight spiciness and tastes of floral and resinous hops. sourdough-like breadiness holds the whole experience together, with a bitterness that follows up on the finish and lingers through the aftertaste. reminds me of a west coast double IPA.

feel: a nice medium-light body. somewhat astringent but with a bit of chewiness. moderately sticky and a bit sweet.

overall: a fairly good rye beer. i don't have much to compare it to from personal experience but it's good and noticeably rye-y. nothing outstanding but it holds its own.

Served as a full pint in a DC taproom. Nice look and smell. This beer went well with a patio and nice conversation. I would have it again, if I could ever get it where I lived. It is a serviceable, quite attractive IPA

12 oz can, about 2.5 months old, but bought from refrigerator section.

Definitely a pretty beer: sorta a "glowing" orange with a bit of haze, nice thick, white head with good retention and lacing
Lots of citrus hop aroma, a bit of pine, and an underlying rye bread maltiness
Big on classic "C" hop flavor- grapefruit, black currant, a bit of pine and spice, firm bitterness. Not as bready as you would think from the amount of rye
Oily mouthfeel from the rye, a little sweet and sticky, medium-low carbonation
Seems like a throw-back RyePA. Old school West Coast hopping, but a bit too heavy to drink much of

From the can, it pours a hazy amber with a nice head. Lacing as you enjoy it. Definite hops in the nose, piney to me. The mouth gets the hops and the rye. Yum!

Glad to try out this rye, even though I typically sidestep the style. Also, I've been ignoring Monument City but it turns out they are likely one of the best (top 5) in Baltimore.

Glowing amber with light haze, nice champagne bubbz n ring of foam that hangs around. Rye and hops on the nose, but a backbone of malted rye on the tongue, which brings out some of the fruits people are talking about in other reviews (I'm not good enough / getting over a cold so can't get specific). Slightly thicker in the mouth than expected. Overall a quality beer, though surely won't blow any minds. Will now drink more Monument City brews.

Smells of rye and some juicy, fruity hops.

Tastes of the juicy hops upfront with an underwhelming malt base. Hops lead off with notes of grapefruit, orange peel, mango, and pineapple. Malts add in a bit of caramel. A hit of rye makes its presence but fades quickly. Feels watery on the backend. Finishes with some hop fruit notes and spice.

Mouthfeel is medium with a slightly crisp amount of carbonation.

Overall, this smells much better than it tastes.

Looks great, but the taste and smell are dominated by hoppiness, hiding most of the rye flavor and taste. That's pretty unfortunate, because in the end the beer tastes more like another average IPA.

On tap at the BNA Party last week.Slightly hazy deep golden color. Spicy earthy resinous and pine with a bit of bready spicy malt to counter. I really enjoyed this beer.

Pretty great beer from a local brewery in Baltimore. They're kind of a one-trick pony it seems, but their 51 Rye is a brilliant showing. This beer has a great taste and pretty solid look. It's an IPA, but isn't too hoppy (or maybe it's safer to say the hops are overtaken by the notes of rye and grapefruit). All in all a great showing from Monument and a good venture on their part into craft beer making.

I really like this brew. Wasn't expecting it the first time - draught. Then tried bottles on two different occasions to make sure it's wasn't an anomaly. It's solid.

A: Poured from the bottle - delivered by my brother-in-law straight from Baltimore itself - into a Piraat tulip/snifter-type glass. Body is slightly hazy golden-honey in color with a small whitish head on top.

T: Nicely balanced between the hops (mainly citrusy - think grapefruit and orange peel - though with a touch of tropical fruit as well) and the rye malt, which shows up on the back end of the palate as earthy and spicy but never overwhelms that initial citrusy hop character. Some heat felt in the belly.

M: Medium in heft, modest carbonation and some creaminess in feel.

O: This is a very nice Rye IPA. The rye is clearly present, yet it doesn't trample all over the hoppy, IPA characteristics of the beer. Good stuff.

One of the best Rye beers I have had. Not too sweet, nice balance. Just the right amount of hoppiness. Seems very consistent from bottle to draft as well.

Has phenomenal carbonation and retention. 4 finger head from a moderately conservative pour...waiting a long time before I can smell/sample this one. Ok had to go to sink and knife off the head, can't wait any longer. So the smell is a wonder citrus hop blast. No pine or dankness. Taste is more subdued but incredibly well balanced with rye malt and sweetness to balance the hops. Rye is sweeter than other rye based IPAs/Pales I've had. The mouthfeel is a brewing miracle in my opinion and perfect. This is a 6.5% standard IPA ABV beer but swear this beer is as creamy and thick like a 12%+ ABV bomb. Not sure why this beer isn't rating higher. Perhaps its not hoppy enough? Not sure but it's extremely well made and satisfying.

Appearance: Pours a murky amber color. The head is a finger high and white in shade. Retention isn't particularly hot, though a consistent texture is kept. Very little lacing sticks to the glass. (3)

Smell: I'm getting tons of orange flesh, orange rind, and many other citrusy qualities; even some tropical ones (like melon and mango). In fact, it almost seems juicy. And yet, rye notes exist as a mercurial presence behind all that fruit. I'm VERY intrigued - and impressed, for that matter. (4)

Taste: Here, some more of the rye bread comes out, along with some minty notes. This isn't nearly as citrusy or tropical as the nose suggested - whatever I do get is muddled near the back end. And that's what this beer is in a nutshell: muddled. (3)

Mouthfeel: This one really fills the mouth with a bread-like consistency and chew, all while retaining a softness to it. It's a fairly big-feeling beer, so drinkability isn't the best. Carbonation is high, however. (3.25)

Overall: The aroma of this beer cashed checks the flavor couldn't cash. The former is juicy, citrusy goodness; the latter is muddled (there's that word again) and a bit messy. Ah well, these guys are new - I'm sure a few tweaks would make this one really damn good. (3)

Poured from a 12 oz bottle into a Brewer's Art goblet. Moderate hand. No identifiable date.

M: Moderate carbonation with a medium boy. Nicely full on the palate, even a bit creamy in texture.

O: I dig grapefruit and I dig rye. It has personality. This one really resonated with me. Nice balance. Good feel.

51 Rye from Monument City Brewing Company
Beer rating: 88 out of 100 with 91 ratings