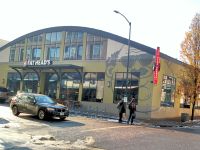 This location is surprisingly spacious with nice natural lighting and an open feel like many other Portland bars and restaurants. The beautiful, cleanly lacquered wooden bar is accented by a few recessed bottle caps, and the taplist is surprisingly large for this relatively new satellite. There's a large number of local guest taps, and a ton of offerings by Fat Head's, all of which stress quality of execution.

Food here seems to be a big draw, just like it is in the Ohio locations, and it goes without saying, fits the name of the original sandwich joint in Pittsburgh quite well. I actually like the vibe here more than the Ohio Saloon, as it feels more adult and mature. Service is still prompt and knowledgeable.

3.45/5  rDev -18.1%
vibe: 3.25 | quality: 3.25 | service: 4 | selection: 3.5 | food: 2.75
August, 19,2017 with the wife.
Deschutes a block away had a hour plus wait so we stopped in here as the wife was hangry as hell. Big venue with a "customer corral" leading you in, this place could turn them over quickly. Server was run off her ass but my glass was never empty so I can't complain. Had a pretty good IPA but wasn't blown away by the beer. The menu seemed to be the same dozen things rearranged in different ways. Had some big ass meat sandwich that wasn't really that great and my only choice for sides was kettle chips? WTF? Just more evidence of the "get em in and out" Pump out the covers as fast as possible mentality. I can't say I had a bad experience but no way I'd go back with Portlands options nearby....
Aug 22, 2017
Rated: 4.21 by oriolesfan4 from Maryland

Vibe was OK, sprawling location with a large capacity, maybe 200? The Olympics were on the big screen. Spotted folks from 21 to 70 having a beer and a meal.

Quality of food and beer was good. My SemperFIPA was pretty clean and tasty and the meals were solid.

Service was very good. Rachel was hustling and served us well. Nothing to gauge her on in terms of beer knowledge.

Selection was good as there were maybe 20 Fat Head beers and maybe 20 guest beers.

Food was good. Da Boss had the brewbon with a kimchi twist that made it interesting. I had the pulled smoked bbq chicken sandwich that was smackable.

Overall I found this to be a good alternative to Deschutes which was jammed pack on a Saturday at 1:30. Recommended.

Reviewed by Canada_Dan from Colorado

This is a vibrant, light and clean place with a nice selection of Fat Head's offerings with really good food. Service was great and the beers, while perhaps not in the premiere grade of some Oregon breweries offers some really solid and good beer. Worth the visit and worth tasting it's offerings.

Nice new pine bartop designed like a bowling alley, huge open space, apparently I got there during the shift change which is why the service was slow, and got better after. Dark colors, lots of old and new wood mixed, def a fun place. Lots of taps, tons of them didn't even bother counting, lots of their own beers, and a handful of guest taps. Although the giant Fat Heads were a bit disturbing.

The bartenders were very friendly and helpful, and fairly knowledgable, unfortunately when I asked a few questions of the brewer, he was there and answered the first question, then disappeared as his shift was over.

Reviewed by AJNIDEK from North Carolina