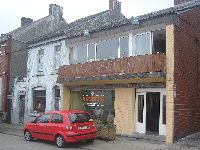 The last, but not least, Brewery Tour on our annual Wakefield CAMRA 2006 Easter Belgium Tour was to be Brasserie Brootcoorens.

Brootcoorens is, to quote the classic phrase, an enthusiastic Microbrewery which first opened on a commercial basis in December 2000. Located at Erquilinnes, which is very close to the French border; so much so that as our Coach drove past we had to turn it around in France.

The unassuming frontage is easy to miss, but the newly planted Brewery Hop Fields that now lie directly opposite are a great pointer to the location, often the orange Brootcoorens Ford Transit Brewery Dray is parked next to these also.

The front tasting room and shop is open to the public once a week on Saturdays from 9am-12 and 1:30pm until 5pm. A large single window has the word Angélus painted in orange on the window. The entrance is on the right and brings you into a small single room which has a smaller one person bar against the back wall on the right hand side. Lots of rural décor and bric-a-brac is neatly arranged. This front tasting is where we spent most of our time as the owner Alain Brootcooren explained the philosophy behind his Brewery. In short, it is a community affair, demonstrated by the fact that several of Alains friends were here to help out serving and selling beer during our Tour and visit.

The Brewery is accessed through another room which is at the back of the front tasting room come shop. You have to walk through a chilled storage area which has crates stacked to ceiling as well as a few kegs which are converted to allow fermentation and aging of a small range of specials, interesting. 450litre batch runs are produced on custom modified ex-Dairy equipment in a single room which houses everything, including the small bottling plant which does 6 bottles at a time, they only bottle in 750ml. Everyone chips in during the brewing process and helps out. Brootcoorens brew their own beers, as well as a range of brewed to order contract offerings. The only way to buy Brootcoorens beers is to come here and get them, bottles and kegs are only sold from the Brewery, if you want em, you have to come and get em, they are not distributed.

Aside from a seemingly infinite number of special brews judging by all the bottles on display in the room at the back of the tasting room, Brootcoorens produces its own label offerings. During our visit the regular brews were Angélus Blonde (7%) and Brune (7%) as well as La Sambresse Blonde (8%). We also got to try the Angélus Spéciale Noël (7%) which failed to impress. A new brew was shared, one that Alain Brootcoorens coyly told me should give us wood, Désir (9%) made with 9 spices, strange but weirdly drinkable. Alain Brootcoorens kindly cracked open a few of his special brews, some contract and some that he has been experimenting with, all had character, but the aged examples of his regular brews impressed the most, especially La Sambresse, this one is a winner. In addition they also produce an Apple Juice, an Apple Cider and an Apple Wine.

Alain Brootcoorens enthusiasm is infectious, his integrity is honorable and intentions admirable. The love of the locals that help out here is testament to that. Its all about the beer and community at Brootcoorens, and whilst some of the brews can be strange to say the least, all the beers are natural and non-filtered. The planted Hop Field opposite the Brewery just adds to the charm. Brootcoorens holds a Hop Festival every year, the next being the 2nd Fête du Houblon en Val de Sambre during 8-9-10 September 2006, its quite the party by all accounts, judging by the supreme hospitality we all received during our visit I can believe that.

Worth a drive out to just to pick up the bottles, its probably the only way to get a hold of these beers. If you do I strongly recommend stocking up on the La Sambresse Blonde, but try not to stray into France if you do go to Erquilinnes.

One to watch out for!!

This is a very memorable place south of Charleroi on the French border. We went there to attend the 2008 hop festival. It was unfortunately a very rainy dreary day, not many attendees, but the brewery folks were very hospitable. The beer we tried was excellent and Alain himself offered to let us tour the brewery as a consolation prize for making the trip to Erquelinnes. We went to see the brewery but were trumped by some slightly enebriated folks from I believe the Chicago area. We enjoyed watching them, quite entertaining.

Alain grows his own hops in the field opposite the brewery. There is nothing quite like the smell of vine fresh hops. You were allowed to pick the cones inside the tent that was setup outside. I would love to go back for the hops day in the future when the weather was better, but it was still nice having a quality Belgian brew on that cold bitter rainy day.

Brasserie Brootcoorens in Erquelinnes, Belgium
Brewery rating: 3.48 out of 5 with 15 ratings