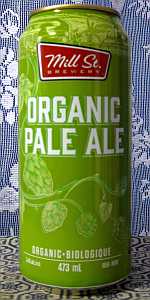 473 mL can from the LCBO; one of two new brews included in their "Organic Mix" four pack. Dated Aug 16 2018 and served barely chilled.

Pours a hazy, sediment-laden golden-amber colour - looks effervescent, too, with one finger of creamy, resilient white head that sticks around for at least ten minutes. A thick, lumpy cap and collar cling tenaciously to the surface, with quite a lot of lacing also having been deposited - say what you will about Mill Street, they know how to produce an attractive glass of beer. Its aroma is subdued by comparison, with notes of apple, buttery pear, apricot and orange coming through, as well as some floral, slightly spicy hop notes. The malts are even less prominent, supplying only slight hints of bread and honeyed sweetness.

Not bad - the flavours are quite low-key, much like the nose. It initially tastes of bready, slightly biscuity malt and light honeyed sweetness, with notes of pear and apple flesh following soon after. Orange peel and stone fruit also come to mind, with some floral, resiny, rather earthy hop notes building up to a mildly bitter finish. Medium-light in body, with moderately low carbonation levels - not very dense, feeling soft and frothy in the mouth. Easy to drink, and not at all tiresome to do so.

Final Grade: 3.54, eking out a decent B grade. Mill Street's Organic Pale Ale isn't anything to write home about, but it's far from the worst thing this outfit has plopped onto shelves in recent years. It honestly reminds me of an English pale ale, moreso than an American-style one, with its mellow flavour profile of ripe orchard fruits and earthy hops. Is that a bad thing? Not really, no - though it does mean that hopheads who were expecting something a bit more 'modern' are liable to be less than enthused with this offering. A bit mundane, sure, but a serviceable ale in any event... I think I'd take their Tankhouse over this one.