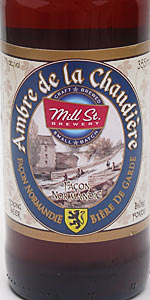 Appearance: A murky unfiltered copper colour with the barest signs of carbonation. The head is practically non-existent even after a fairly aggressive pour.

Smell: Bready malt with a fruity yeast kick with orange and coriander notes with a touch of pear. It's just far too subdued, although warming helped it's case slighty, pronouncing the musty yeast a little bit more.

Taste: The yeast is very reminiscent of a Belgian beer, as it dominates the profile of this beer. It's starts out subdued as mild malt manages to hold it in check, but then quickly hogs the spotlight as it offers a mixture of pear, orange and spice with berry notes, all accompanies by a dry musty yeast taste which then ends with a slight alcohol twang. It begins a bit more balanced when cool, but gets out of hand as it warms.

Mouthfeel: I can't stand a beer without head, but this one makes up for it with leaving only a nice like malt and spiced orange aftertaste. Carbonation is fairly standard stuff, as is the transistioning.

Drinkability: Normally something with that much of a dry yeast character wouldn't do it for me, but the alcohol twang at the end does surprising wonders here. I can see this going good with pork or lamb.

Final Thoughts: Being my second Bier de Garde (the first being Gavroche) I'd like to say they really should have pulled back the yeast and let more malt character in. Sure, it's better then a generic lager, but it just seems to me to be a very occasional drinker. This is a beer that epitomizes seasonal, as it quickly wears out it's welcome.

a funky new addition to the sampler pack for Spring 2012. A hazy unfiltered beer that seems to have Hefe like bubblegum notes to the nose but tempered with the farmhouse yeasty smell associated with the Biere de Garde style. A well made beer that tastes like a hefe crossed with Saison Dupont. I would love to see this releases in big 22oz bottles.

Spicy nose. Quick dissipating foamy head on medium yellow body. Medium mouthfeel. OK drinkability. Too sweet and yeasty to be really the style, but an acceptable Belgian, with some fruit and sugar, corriander , fennel and other herbs. Fresh.Thanks Pino.

355 mL bottle from a sampler pack. This is my first biere de garde review, and I've only had a few saisons - needless to say, this type of brew is well outside the field of my expertise, but I'm always interested in trying new styles.

Pours a cloudy orange-apricot colour, with a thin white head that fizzles away quickly. Swirling doesn't really bring it back either; the stuff just looks kind of flat. Pleasant aroma with distinctly Belgian yeast and its fruity esters, some light orange citrus and muted coriander spiciness.

Pretty tasty, with lots of Belgian sugar and bubblegum notes mingling with various fruit flavours, including tangerine, sour apple and maybe even some banana toward the finish. The coriander and fennel provide a constant peppery presence that cuts through the sugar. Spicy aftertaste with some yeast and malty sweetness. Medium-bodied, a little slippery on the palate with a smooth mouthfeel that improves as it warms, and moderate carbonation that gently prickles the tongue. The alcohol isn't very detectable.

I tried Mill Street's Betelgeuse last year, and this reminds me of it in several ways. Since BdGs are a style that just isn't very easy to find examples of around here, I can really only compare this to tangentially-related brews - and thinking of this as a saison crossed with a BPA (or even a tripel) seems like a decent compromise to me. Whatever it is, it's good stuff.

Final Grade: 3.72, a B grade. I enjoyed my glass of Ambre de la Chaudiere, and I would say that if you are at all a fan of saisons and other Belgian styles, this is probably worth trying. I usually prefer lighter, sub-6% abv brews in stinking hot weather like this, but this stuff is a rare exception for me because despite the relative heft it's still surprisingly refreshing. Great to see some of the Ottawa brewpub stuff making its way this far, even if it is in sampler pack format - I'd get this again if they offered it in singles.

355ml bottle - a nice foray by this rather play-it-safe (in my experience, anyway) brewery. "Cauldron Falls Amber", I suppose, for we Anglo Westerners.

This beer pours a hazy, frosted window dark golden amber hue, with one very thin finger of wispy off-white head, which predictably wafts away in a near instantaneous manner, leaving damned-near nothing in the way of lace around the glass.

The carbonation is quite understated, the body medium-light in weight, and generally unencumbered in its smoothness. It finishes just a wee bit off-dry, with the fruit and malt the usual suspects, as the whole affair tends to, in the end, a nice spicy, slightly boozy dryness.

Impressed, am I at a Canadian brewery from Ontario, no less, putting up this little number against the greats of Eastern France and lower Belgium. While not quite award-worthy, this is still an agreeable version of the style - drinkable, and worthy, in strength, as well as flavour.

A: Pours a hazy amber color with a small amount of fizzy off white head. All but a few bubbles dissipates quickly, leaving no lacing.

S: Thickly sweet boozy caramel malt, with a touch of fruit. A bit over the too-sweet line for me; it's very dense and it kind of covers anything else that might be going on.

T: Starts with a lighter version of the sweetness from the aroma, leading into a mild grain middle and a slightly tart fruit finish.

Overall, just OK. The sweetness is kind of overbearing. I wouldn't seek this out again, and Mill St has much better offerings.

One of the treats in the summer mixer pack.

A - Pours a hazy copper colour, finger of head with little retention or lacing.

T - Toasted grains, hints of sweet yeast esthers, some mild spicing and citrus notes. The finish is tart with some sour apples and grapefruit with bready notes that linger.

O - A tasty ale with unique flavours, certainly worth a try, but nothing that will blow your mind. Glad to see Mill Street venturing into these more foreign styles, and definitely glad they're including these new brews in their mixer packs.

Hazy amber/orange colour, incredibly light sheet of white head, some white liquid looking yeast collected at the bottom of the glass, no lace at all. Smell is full of fruity yeast and spices, citrusy orange scents, an underlying candy sweetness is present and more than anything has a very belgian nose on a whole. Taste is of spicy yeast with some floral flavours, fruit comes in as well with obvious green apple, orange and more yeastiness mid palate, at points some sweetness is present but finishes quite dry and fruity. Med-hight carbonation, medium body and a nice enough feel. Overall this was rather enjoyable, felt more to me like a belgian pale but this was quite drinkable and something I would purchase again if I didn't have to get this in a mixed pack.

Appearance – Hazy amber/copper colour with an above average size fizzy white coloured head. There is an average amount of carbonation and there is some decent lacing. The head lasted for around 3-4 minutes before it was gone.

Taste & Mouth - The beer has an above average amount of carbonation. I can taste grains/bread mixed with citrus and some faint yeast. There is also some coriander and clove mixed with a peppery spiciness. It finishes with a spicy and lightly sweet aftertaste.

Overall – Probably one of the best Mill Street beers. It's got a nice variety of flavours going on that keeps it interesting. I'd order it again.

Beer is cloudy amber, murky. A bit of white foam, but really minimal.

Smell is malty, with some caramel and bread. Belgian yeast as well.

Overall, not great, but I have to confess that it was better than I expected, as I am not a huge fan of the brewery. I didn't know that Mill Street had opened a pub in Pearson Airport and drinking this was a pretty good way to kill time before a flight.

Appearance: It has a nice cloudy orange color to it. It has a nice white head that dies down somewhat fast and leaves some lacing.

Taste: Like the aromas, it has some Belgian yeast, a subtle spice character, some bready/grainy malts, a light fruitiness and light hops.

Drinkability: It's a very smooth drinkable beer accompanied with good flavors and aromas.

Appearance- Pours a cloudy dark amber with a 1/4 finger width of white head that quickly dissipates.

Overall- For my first Biere de Garde, an enjoyable brew by Mill Street. There are many flavours to be enjoyed and it's nice to see a Canadian brewer have a go at this style.