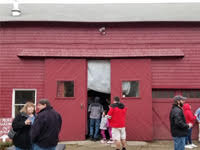 This was a gem of a find. I've never heard of this brewery before and visited it for the first time this past weekend while driving back to PA after EBF. What really caught my attention is how well it's hidden - well off the main road, a 400 yard drive through the woods on a dirt road. The brewery is in a small red barn and has portable bathrooms installed on the property. It was a brisk day when we visited and the small barn doesn't have much heat and gets filled to capacity pretty quickly since this place draws alot of fellow nerds. That being said, expect to sample and enjoy some of their beers while standing outside - a small price to pay for great beer. I wish I bought more beer to bring home when we were there, Tilted Barn has a great future ahead of them. If you're in the area, check this place out.

Beautiful place, I haven't been since the old building. Tried 6 different beers, 2 were very oxidized, and none made me want to order a full pint. I don't understand how places like this expand, but I guess I am in the minority. Fairly pedestrian beers with no standouts in my opinion.

Beautiful place. Really great spot on a large wooded area and big fields. Outdoor bar area serving beers was a nice touch. Really nice two floors inside. They let you set up your own chairs outside. Maybe have more non-IPA type beers. The lager was really good. Have more like that!

Great beers, especially the IPA/NEIPA brews. Vibe is chill, and outdoorsy being a working farm. Service is a tad slow, but I expect that will change dramatically later this year when their new brewhouse is completed. From the images they've put online, it's going to be really impressive.

TB has what I believe are some of the best IPAs in New England. They don't get the recognition because of limited availability, but when that changes, look out - the lines may be longer than some other IPA 'Meccas'.

Had heard good things about this place and wanted to make it a point to stop and check it out on my way home from EBF 2020. It's kind of off the beaten path similar to Plan Bee and Hill Farmstead in a way. The people were lined up out the door from samples and cans for take out. The place was pretty packed inside but they had an upstairs area that I didn't even try to check out due to the amount of people there at the time. The staff was super friendly and helpful with questions that were asked. The beers were pretty solid, mostly IPA's were flowing which didn't both me but may bother some. All in all it was a really cool spot and I would definitely stop back again sometime.

I enjoy their beer and it's a nice farm environment but the selection is limited and the check out line is poorly setup. Extremely slow line as there aren't enough POS.

What is there not to love about fresh beer on a farm? Seems to be an evolving property with projects and additions planned. A nice little barn across from the house with an upstairs lounge area and plenty of delicious beer on offer. And they have rotating food trucks! Easy to get to, as well. Can’t beat it.

This place is definitely Exeter! The brewery is in a red barn next to the owners' house and Christmas tree farm. Turn off onto the dirt road and follow the signs for the Christmas trees.

Rustic farm location down a long unpaved driveway. In the barn they have the taps for serving pours of beer and also selling cans. A few picnic tables but most people brought chairs or blankets and sit out in the grass by the pond.

5 beers on tap - 2 blondes, 1 pale, 2 DIPA - so limited selection. The Pale and DIPA were available in cans. Good beer.

Down a dirt road, in the middle of nowhere in the dental floss that is between Massachusetts and Connecticut that is Rhode Island is where I find the Tilted Barn. heard about the place on BA and found myself detouring off of 95 sand into the hinterlands of the Ocean State. A true bucolic farm including burro’s and hop bines. Small line, three registers with tap service in an old barn. Small line, reminds me of the old Treehouse but more rustic. Crunchy granola types running the local ore farm to table brew house. Good beer. Worth the excursion.

If DIPA’s are your thing then this is your brewery when you’re in Rhode Island. Their IPAs are very good as well, the DIPAs and IPAs are their niche and they are among the very best there is.

BEST BEER EVER. HAVEN'T HAD A BAD ONE YET.

Small barn/homestead in the middle of the woods that offers some of the greatest beer you can get. Always enjoy hanging out in line with the other hop-heads, relaxed vibe. Usually you can get pours while waiting.

Excellent vibe at this somewhat unique small brewery. Line, kids, dogs, friendly people and lots of mud, especially in the long driveway and parking lot. Very friendly service with 4 beers for sale to go. Pours available for those in line.

Finally got to spend some time in the barn-no lines -no crazies-sampling a # of ales and a very good stout. Great atmosphere people and of course the beer. Top shelf in every way. Took a non craft beer fan with us , was looking for a lower abv , were no real choices. Great spot can’t wait to get back

When you get close to Tilted Barn's location, slow down - you are liable to drive past it as I did. One lone, small sign at the end of a long dirt driveway surrounded by woods is the only landmark. The parking lot is unpaved - not a problem in the Summer. The facility itself is a barn, and a small barn at that. I went on a release day, and did not stick around very long after the cans were released. The staff were very friendly. One particular aspect I like about the release is that 1/2 hour or so before the release, you can walk in and buy pours, which helps pass the time immensely. There are a moderate number of t shirts, hats, stickers, etc. for sale inside. T shirts were $20 and tank tops were $18 at the time of my visit.

In terms of hanging around after a release, there isn't much area to hang around in building wise. Three staff pour beer and sell cans. There is no seating on the first floor of the barn, which probably couldn't hold more than 20 people standing inside. There is an upstairs area, but I did not go up. It is likely a bit more roomy, as the top floor also extends over the small brewing area. I couldn't see if there are tables up there, but I am sure that there are.

There were 2 cans being released, with two 4 packs max per brand and 12 cans total. On draft, there were 5 beers to chose. I had 4 of the 5, and all were very tasty.

In the Spring, Summer and Fall, Tilted Barn would be a great experience. In the Winter, less so due to the presumably minimally (at least) snow/ice on the unpaved parking lot and the lack of much indoor space to escape the cold.

But a very charming place with friendly staff.