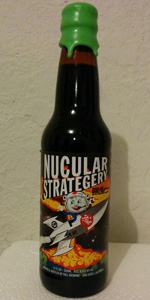 a really cool imperial stout with coconut and aged in a combination of rum and bourbon barrels, probably the most ambitious of the beers we had here at fall, and also probably objectively the best. its killer stuff for so many reasons. a real natural coconut profile is strong in aroma but not dominant in the flavor, a bit sweet but not too much. i also like that the beer isnt enormous on the alcohol, so many of these crank into the 12% abv and beyond range, its just too much, but here we have something a little more drinkable and that doesnt need too much coconut for it to really stand out. also as such, its not too sugary and intense, i really dig that. the mixed barrels are also really cool, sweet for sure, more rum than bourbon maybe, but with the oak and vanilla character working super well with the added coconut, some char and balancing bitterness from the barrel and the roasted grain, well rounded and delicious for sure. the bottles and the art look kind of goofy here, like they dont really do justice to the serious goodness of the beer, but thats okay. i thought this was killer, the best of the beers we had in here! different and delicious, lots to like!

Pours black with minimal head. Fudge, banana, rum spice, and coconut on the nose. Similar on the tongue, but with the addition of some bitter hop character and bourbon oak, brought out by the moderately high carbonation. Good saturation of flavors for 8.5% abv in a BA stout.

"An Imperial Stout infused with toasted coconut, and then blended with an Imperial Stout that has been aged in various been aged in various bourbon and rum barrels for 1 year. Strong vanilla flavors from the coconut, rum and bourbon blend well with the firm coffee and chocolate flavors from the stout. Medium-Full bodied with a hint of alcohol wearing. "

Nucular Strategery from Fall Brewing Company
Beer rating: 3.97 out of 5 with 7 ratings