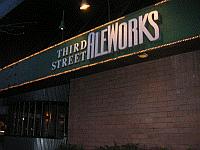 After a few brews at Russian River, I took a quick trip back to the Hotel to wash and brush up for the evenings New Years Eve festivities. Heading back into Santa Rosa for the Russian River Big Blue Ball, I first met fellow BA Rapapoda at the Third Street Aleworks for a few brews and then a trip to Flavor Bistro before hitting RRBC again for the NYE Big Blue Ball.

Boring dark brick exterior with a long green sign that has its white text at the far right hand side. I had walked past here earlier so I knew exactly where the entrance was on Third Street. The general external appearance is plain shit ugly, it reminded me of an Administration Building from one of those new-age 1970s UK Polytechnics, or concrete carbuncles as Prince Charles would have referred to it. Was there a power outage I wondered? Had TSA not paid their latest electricity bill? Because the outside was extremely *dark* to say the least. The dingy boring facade was thankfully broken by a half-fancy large glass entranceway and at last some light, albeit from the interior though.

Once inside it has a juxta-posed mixture of warming woods and cold bare steel, all thrown together in a Meccano like constructa-set appearance. Multi-level floors and several wide staircases all lend a semi-industrial feel. Main bar runs to the back wall and had a collection of bar stools along it. I met Rap at a little small dividing wall which runs parallel and in front of the Bar; it appears to have another smaller bar surface running along it which was cool as the actual bar was crowded. Tables and chairs are all over the place, upstairs, downstairs, front, back and sides. The place was buzzing when I got here, but not busy. Lots of TVs showing Sport and music from somewhere vied for superiority. Lots of young fashionable NoCalis and large groups gave the place a feel of a Sports Bar cum TGI Fridays with a local Brewpub thrown in for good measure. It didnt look like many came here for the beer though, more so the happening atmosphere, if you know what I mean. However, it was New Years Eve so maybe that was part of the reason why.

The beer range on sale from the 8 or so stainless taps was extremely varied, including a Cask too (nice!). However, as Rap got here before I did he got me to taste his Pils before I ordered my libation. WTF!!? Looked like a Pale Ale and tasted rank. Service was reactionary, the server was one of those Dudes that doesnt know who got to the bar first or had been waiting the longest  I had been waiting behind some punters at the bar but he served someone else who turned up near where he was stood - hate that. I finally ordered an IPA, passable but nothing special I found.

I didnt bother with food, but this place looks heavily skewed towards the Restaurant side of things, which is fine. I did note that many of people stood and milling around the entranceway were waiting to be seated for food, seems like a popular place to eat.

I think heading to Russian River before heading here meant that my impartiality was seriously dented, even so, too many niggling nit picks to leave here with a good feel. It was also worthy of note that after leaving here, chats with locals in other establishments started to unearth some rather negative comments regarding beer quality at TSA, so maybe our experience wasnt isolated. Ill be interested to read subsequent BeerFlys for the TSA and see if I had a non-reflective visit. You know what it really felt like..well, if this would have had a Rock Bottom sign on the front it would not have surprised me in the least.

Until I get a return trip here at quieter times later in the year (during my next trip to Santa Rosa) when this will surely clear up the bad visit or slipping standards dilemma - I have to say that I left here with very mixed feelings about this place.

Super Bowl Sunday and Pliny release weekend made this place empty early in the day. Sampled a few and got a crowler to go.Went for their highest rated beers, and was underwhelmed. I had just come out of RR, so perhaps my palate was skewed. Still found them rather pedestrian. Open and inviting, kind of industrial feel. No guest taps, Flight options were for the whole lineup, else just 10 oz pours available.

A decent spot to come and imbibe in craft beers, but Third Street Aleworks pales (no pun intended!) in comparison to their neighboring microbrewery, the famed Russian River Brewery. That said, the food was good, but standard pub fare, and the beers I tried on their flight menu were of mixed quality. Most of them were of a respectable grade, but few of them stood out. If Russian River is too packed to enter due to a big event, let Third Street pick you up on the overflow, but don't there expecting to drink anything that equivocates Pliny.

Great beers, guys were really cool. Down the street from Russian River, looking forward to popping in there this year after the RR Younger release to try their Seasonal DIPA release. Cheers

One of the larger micro-brew houses in Sonoma county, CA. But not even in the running for tasty beers or tasty food.

The pub is always busy. The vibe is young and northern California cool. It's a hang-out in Downtown Santa Rosa. Popular.

But the beers (I've tasted 10) are all underwhelming. Funny story: I'm sampling the menu with the 2.5 ounce shots. I'm with my beer super-snob friend who is from Birmingham England. Neither he nor I are really relishing the various beers. As a certified wino I know that some of the tastiest red wines are blends. So to the horror of the wait staff I take the 10 samples and pour them all together into a 22 ounce glass. It tasted extremely delicious. Heresy? Sure. Would I do it again? You betch'a!

Google reviews held this place much higher than on here, but I wasn't terribly disappointed.
Good vibe with 90's alt rock, so you can't go wrong with that.
The server was friendly and attentive, so no fault there.
Their house beers were ok at best (we tried 4 between the 3 of us) and food was standard pub fare.

Not mind blowing, but a decent alternative if you don't want to die of old age in the Russian River line.

Very typical brewhouse kind of setup. It's a good place to watch a game while you get dinner and some beers. The food and beers are both decent in quality, I've never had issues. Service is fairly average, no bad experiences and nothing that really stands out. The beer selection is pretty good, lots of different styles.

Went late on a week night and it was still buzzing. Very friendly staff and tasty food. The sampler is the way to go. The night I was there it included 10 drafts and 2 cask ales. Beer isn't as good as their neighbors (Russian River) but still enjoyable.