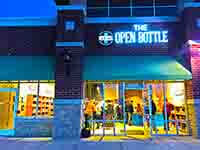 Rated by mschrei from Illinois

Rated by SWChi from Illinois

Reviewed by WITTBEER from Illinois

Reviewed by AngEo from Texas

Reviewed by FFFjunkie from Illinois

1. 8 taps to choose from while you shop. They usually always have something interesting on tap.

2. More times than not they do free samples of specific beer when you walk in the door.

3. The owners are very knowledgeable about what they carry and almost all beer styles.

4. They date everything they get in the day they get it in. It's nice to know when the site received something even if a certain brewer doesn't date it. It takes most if the guesswork out of it.

5. You can break any 4 or 6 pack into a single to make your own assortment of 4pks or 6pks.

6. You can drink while you shop.

This place really is a highly recommended shop if you're in the area.

Reviewed by Dankacheese from Illinois

4.74/5  rDev +1.5%
vibe: 4 | quality: 5 | service: 4.5 | selection: 5
If you're looking for a place that has great bottles for sale, great service and a very nicely lit space for us foggy visitors...then this is it. Yes, it's in a odd location but the feel and the vibe of the outside surrounding city/strip mall disappear once you walk in and get lost in the selection. Great spot to space out for a while and talk about brews while enjoying something awesome on tap.

Staff is extremely knowledgeable and have heard of and or tasted just about any beer you could toss at them. They're very cool with bringing food in and letting you eat at the bar.

The bulk of my review is only going to be two negative pieces of criticism and they're still pretty light. Otherwise I'd just be rambling about how awesome it is. 1) It'd be pretty cool if they hosted bottle shares. Just throwing that out there. It's not like they don't share bottles daily or customers don't bring bottles in. Because there is a shitload of that going on. But perhaps organize like a monthly whale bottle share? I dunno. Guess that's why I don't own a place like this. 2) The tap prices seem a bit pricey, on occasion. Again, I can't say anything negative without following it up with what they do right because it is such a good place. Even though their taplist is seemingly expensive sometimes, the VARIETY and QUALITY is phenomenal. If you live in the surrounding area, good luck finding anywhere with the variety of constant rotating beers they have on tap.

Hopefully this was helpful. If you're near Tinley Park or live in the area and love craft beer, then you should really know all about this place. Insert all their good membership deals, yada yada. Good luck getting the owner to give a negative criticism about any beer. I try all the time!

US craft on an island in the front, imports on an island towards the back. Limited cooler space along a back wall, as well as a small mix-a-six section. Some small details of the store were straight out of the Beer Temple playbook, the island layout (with identical shelving), tags with received on date, daily free tastings, and the door in the back covered with bottle cap magnets. The owners even mentioned in an interview they were inspired to open a shop after visiting Beer Temple. Even if it's not fully original, they do pull it off well, and you can tell a lot of work was put into the place. It serves a niche in the area for sure.

The bar is nice, with a finished wood surface and bottle pendant lighting above the bar, clad underneath in light blue corrugated metal. Selection was interesting and varied across 8 taps, thankfully half pours were on the menu. Crowd and vibe were a little sterile, no one seemed to linger, instead staying glued to their phones before leaving.

The lone staff member was great though, she chatted with us and offered a beer sample. We arrived later in the evening but were still welcomed and taken care of. All that said, not a fan of a few obvious shill reviews here. Let honest reviews stand on their own...

4.53/5  rDev -3%
vibe: 4.75 | quality: 4.5 | service: 4.75 | selection: 4.25
Vibe is really nice especially considering its in a strip mall. Cool, warehouse like feel, with an aesthetically pleasing appearance. Quality is good - they've got fresh stuff, competitive pricing compared to Chicago. Service is stop notch - staff is friendly and helpful. Selection of bottles is a bit thin comparatively speaking, but it has all the most important items. And their draft list is top notch and generally has some nice offerings on tap.
Sep 07, 2016
Rated: 4.93 by Dr_Fox from Utah

Rated by JmurphylovessAmadams from Illinois

Reviewed by Matt_Windle from Illinois

4.93/5  rDev +5.6%
vibe: 5 | quality: 5 | service: 5 | selection: 4.75
The Open Bottle filled a much missing niche in the SW suburbs. With 8 quality rotating taps, including the occasional cider, and a great selection of local and non-local beers, ciders, and meads, there's something to satisfy everyone's palate. The owners are fantastic and spend a lot of time interacting with the guests in their shop. You've gotta keep tabs on their special events as they host quality affairs that aren't to be missed!
Feb 16, 2016

Reviewed by pgardner from Illinois

5/5  rDev +7.1%
vibe: 5 | quality: 5 | service: 5 | selection: 5
From the first time I went into The Open Bottle (first opened last January) through now, and I am sure the future, this establishment is fabulous. Patrick and Julia have created a special place you can go to and try new beers, purchase, and learn about types of beers. They change out tap very consistently and keep the variety fresh. Both are very knowledge and I have YET to go there and not leave very happy. I am sure that day will never come. Patrick has changed me from a domestic big brewery beer drinker into someone who really loves craft beers. Without The Open Bottle I would not be able to have such a wide choice of beers to choose from, and be able to taste so many great beers. I recently had a party there which was out of this world and people who went told me they really enjoyed going and being there.
You have to go there to see what a fabulous place this is.
Jan 31, 2016

Reviewed by VinHalen54 from Illinois

Rated by JJH1018 from Illinois

Reviewed by ringwersen from Illinois

4.97/5  rDev +6.4%
vibe: 4.75 | quality: 5 | service: 5 | selection: 5
Very well-curated selection of to-go beers and taps for on-site enjoyment. Owners are knowledgeable and very friendly. Selection is organized very logically and the presentation is very nice. Cleanest tap lines in town. You can sample something tasty while you shop, or stay for a few pours. Prices are always on par with the big stores - you never have to worry about gouging. And they do regular samples from out-of-market or rare bottles; once stopped in to pick up a few beers and ended up drinking some Crooked Stave. A must-visit for the area. If I lived closer they'd have all my money.
Dec 20, 2015
Rated: 4.49 by lemmy187 from Missouri

Rated by myuncle from Illinois

Reviewed by creepinjeeper from Missouri

4.78/5  rDev +2.4%
vibe: 5 | quality: 4.75 | service: 5 | selection: 4.5
Stopped in last week for the first time. Nice bottle selection, they don't carry everything, which I can appreciate because harder stuff can be found there. They sell single bottles of everything. They date the beer with the day it hits the shelves; a nice touch. Nice tap selection, again nice harder to get beers such as Prairie Bomb! Nice vibe, bring your own food and your dog if he can get along with other dogs. Overall, not your typical liquor store. I'll be going back.
Aug 05, 2015
Rated: 4.79 by Eman17 from Illinois

Reviewed by Mager from Illinois

5/5  rDev +7.1%
vibe: 5 | quality: 5 | service: 5 | selection: 5
The best craft beer shop hands down. What's better than shopping for beer while drinking one? Their selection is top notch, the staff is super friendly, and prices are spot-on! Highly recommended!
May 18, 2015
Rated: 4.5 by swarthybrews from Kentucky